JUMP BALL No. 95.By Arlington James 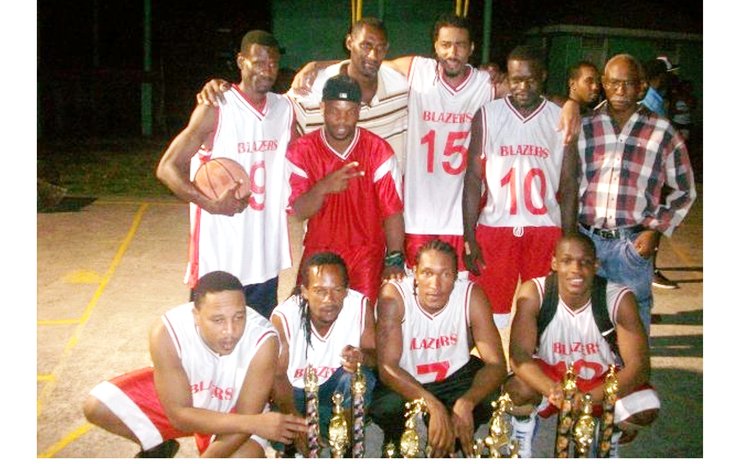 BLAZERS on winning the 2009 Premier Division championship, accompanied by Coach (in long-sleeved shirt)

Blazing Hot Blazers: As noted earlier, Blazers Senior debuted in 1993 and under Coach Edgar Robinson immediately sent out a clear, powerful warning to all and sundry that the new kids on the court had "come out to play 'ball", capturing the Knock-out championship in only their first outing. The teams who stood up and took note included the legendary Cardinals who had been competing in the national league since 1968, and who, by 1993, had already amassed quite an impressive collection of championships from DABA's Division I (and Premier Division) League, Knock-out and Play-off competitions.

Within two years of entering the basketball arena (1995) Blazers added the Division I League Championship to their small but growing collection, and went on to win their first Play-Off championship in 2000.

The team also boasts of having performed two '3-peats' (winning championships of the same category in three consecutive years). They raised their Premier Division Play-Off championship trophy in 1995, 1996 and 1997 and repeated the feat in 2013, 2014 and 2015. Cardinals, in their heyday, had captured the League Championship on six consecutive occasions (1968-1973) and the Knock-out Championship for an equal number of times over the same period.

The number of championships copped by Blazers was presented above in the section on 'Massacre's Basketball Trophy Cabinet' in Part III of the article.

It should be noted that Blazers' Thomas Felix who has captured the highest number of senior division Most Valuable Player (MVP) Awards in the history of the national basketball league, was featured in the Jump Ball article, "Thomas Felix, 'Mr. MVP" which was published in The Sun newspaper in August 2021.

It should be noted further that from 1995 the DABA eliminated the Knock-Out competition from all Divisions on their fixtures, and so it is quite likely that had that very popular competition remained on the cards Blazers tally of championships may have been higher than what currently obtains.

Blazers' Opponents Through the Years: Having competed in the national basketball league for about two and a half decades, Blazers have squared up against teams from all across the country. During the period the national league's senior division, viz., Division I/Premier Division – presented teams from Bath Estate, Castle Bruce, Goodwill, Grand Bay, Marigot, Massacre, Paix Bouche, Pichelin, Portsmouth, Pottersville, Roseau, Scott's Head, Soufriere, St. Joseph, Trafalgar and Wesley, and a few others – an indication of the level of decentralization of the sport on the island to date.

Also on the cards during that period were Pacers, Paix Bouche (Super) Eagles, Police Sports Club, Pros, Raiders, Rebels, Sharks, Sixers, Soufriere Tremors, Thundererz, Tigers, Venoms, Warriors, Wesley Raptors, Wolverines and X-Men. The Blazers senior team would have played against the majority – if not all - of those teams.

Blazers Representing Dominica: During the 1980s and 1990s the OECS Sports Desk was quite busy and The Nature Isle got its fair share of hosting sub-regional basketball tournaments, at both club and national levels. In 1994 Dominica staged the OECS Champion-of-Champions Tournament and, as the host country, was represented by two teams, viz. Cardinals and Blazers. The boys from Massacre placed 4th out of the five participating teams.

In addition, several players from the village attending secondary school represented Team Dominica in the basketball segment of some editions of the Windward Islands 'Inter-Schools' Games.

Blazers in Friendlies & Overseas Tournaments: In 2011 Blazers engaged Big Banana Express of Antigua in a friendly match which was staged here in Dominica.

The team is the only one from Massacre which has participated in basketball tournaments overseas, having participated in invitational competitions in St. Maarten (Battle of the Fittest), St. Kitts and Tortola. They have been fairly successful in those events and added to their collection of silverware, twice winning the tournament in St. Maarten and once in St. Kitts.