May you rest in peace, Popsie

A Daughter's Love: A tribute to Anderson Jolly 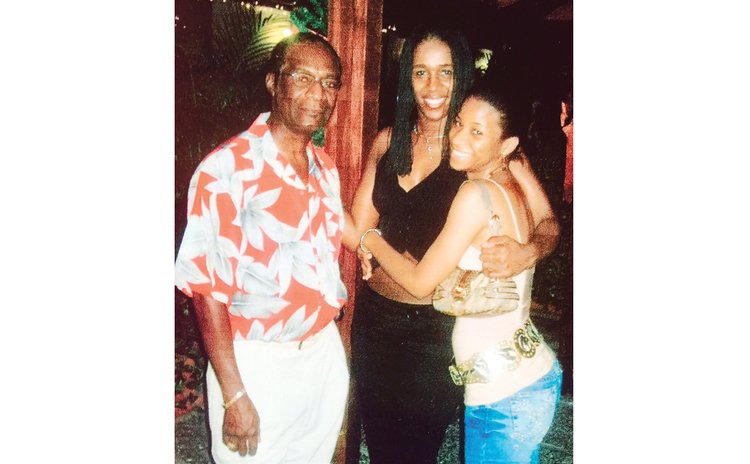 Jolly,left, and members of his family

My heart was racing. I clutched my seven-week-old baby and gripped his daddy's arm. He was amused but reassuring. What was this? The trees were right outside my window! I could touch them, it seemed. And there's a river! Oh, my gosh! Are we going down? Are we flying sideways?

Suddenly, there it was, a runway and thankfully we were soon on solid ground. That was my arrival at Dominica's Melville Hall Airport two decades ago. On the long winding forested ride to Roseau I kept wondering out loud, "When are we going to see people?" It was the Dominica I had instantly fallen in love with five years earlier. (I had used Canefield Airport then)

I love the people of Dominica, but among those people have been my own people, the Jollys! They included my son's father, grandparents, uncles, aunt and their extensions, not excluding the Jollys' Pharmacy staff.

The first family member I would meet in 1996 was a 13-year-old bookworm named Lisa. While she was the happy baby of the family, Lisa was already a serious intellectual, who loved a debate. Devoid of a hint of shyness she was intelligent, confident and composed beyond her years. Precocious too!

"Do you play any sports?" I had asked at our first meeting, looking for common ground. "No, she smiled sweetly, "I'm all brain." That still gives me a chuckle. I had met my little sister whom I quickly learned was the apple of her father's eye.

Then I met him; the great patriarch of the family, Anderson Jolly, the original. The Anderson whose name my son and his father bear. I had been assured he was a kind, warm and gentle human being, but that had been understated. It had to be, because Pops, as I came to call him, was a personable man. What he was to you was unique to you; and you'd be hard-pressed to find someone describing a personal relationship with Mr. Jolly as anything but positive. I was especially blessed because for the next 20 years he would be a bright light in the life of my son, his first grandson and would be no less than a father to me. Mr. Jolly valued above all, the bond of family. He watered his own with his time and his tenderness. Family river picnics, Sundays at Castaways with his sons… he loved the water!

As my son Andy grapples with the loss of the man he referred to as his "favorite human", my tears are for him, for his great loss. "Pops was supposed to be immortal, Mom". He will always be alive in your heart, I tell him, "And this mortal shall put on immortality". My tears are for his wife Fatima, his sons Addison, Andy, Trevor and Orrin, and for his daughter Lisa. My tears are for his grandchildren who didn't get enough of him.

To his family, Mr. Jolly's spirit was one too humble, too vibrant, too larger-than-life to be dampened. The sudden realization that his body was under attack would not easily sink in. But the Jolly family rallied around Pops. What he had poured into his family over the years, with him now stricken, all hands rushed on deck committed to righting the ship that had long steadied the family. All hands yes, but it was the former little girl celebrated in the Jollys' BabyLis products, now Dr. Lisa Jolly, whose commitment to her dad was immeasurable! She shelved everything to give him 100 percent. During my visits I saw the harvest of the love and tenderness with which Mr. Jolly had nurtured his daughter. The bond was extraordinary! She could read his every move, detect what he himself remarked he didn't realize.

Wordless, nuanced, a hug, a hand, a touch, a smile, a laugh, a meal…a daughter was giving back the deep love and attention she had received. As he had been to all his children, so they were to him at this challenging time. It was a privilege to be a witness, despite the underlying sad reality.

I'm not looking forward to landing at Melville Hall again soon. Exactly 20 years since that first landing, the trees just outside my window won't frighten me, the feeling of flying sideways won't be there. My thoughts will distract me. I will be thinking of the great man it's been a joy to know and love. I will be thinking of my son who has lost his best friend. I will be remembering the jolliest of times; the frolicking at Layou River, playing cricket at Mero Beach and Pop's utter elation when he clean-bowled me.

I will recall how much fellow-daughter-in law Makeba and I looked forward to Pops stopping for Bakes and Vitamalt at the little shop on the way home. I will flashback to us dancing to Swinging Stars at Fort Young or Springfield at Christmas time. I will smile remembering how he would confiscate my glass of rum punch when he thought I'd had enough. I will hear his infectious laugh. My eyes will well up and overflow as they're doing now.

I'm not sure I am ready to say goodbye to Pops; but I know I must. I'm grateful for having had him for so many years, though they weren't enough. The pain is immense losing one who embodied so much to so many. It has dawned on me that it was he who gave me, he who showed me, indeed he who epitomized the best of Dominica. I was blessed. I won't forget. I would be forever grateful. I owe him no less than a Jolly goodbye.

May you rest in peace, Popsie, till we meet in glory.