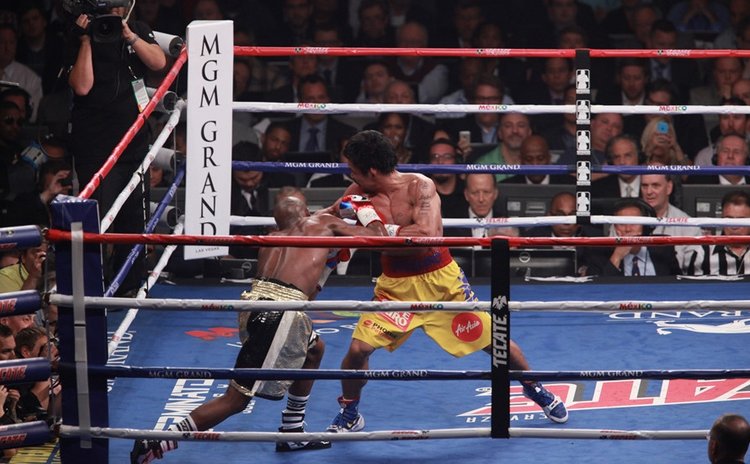 Floyd Mayweather (L) lands a punch on Manny Pacquiao (R) in the eighth round during their welterweight WBO, WBC and WBA (Super) title fight in Las Vegas, Nevada, May 2, 2015. (Xinhua/Marcel Thomas)

LAS VEGAS, May 3 (Xinhua) -- Floyd Mayweather retained his perfect record to 48-0 with a unanimous decision over Manny Pacquiao on Saturday, then reiterated he'll retire after one more bout.

"He is a hell of a fighter," Mayweather said of Pacquiao, the Filipino icon who has won world titles in an unprecedented eight weight divisions.

"I take my hat off to him. Now I see why he's one of the guys that are at the pinnacle of the sport of boxing."

Mayweather reiterated that he plans to fight just one more time.

With one more fight, the 38-year-old Mayweather will fulfill his rich six-fight deal with telecaster Showtime. And with one more victory he would match the iconic 49-0 ring record of Rocky Marciano.

Mayweather has insisted throughout the build-up to the Pacquiao fight that 49-0 would be enough for him -- although skeptics think that should he get there he won't be able to resist trying for a 50th win.

"My last fight is in September, and then it's time for me to hang it up," Mayweather said.