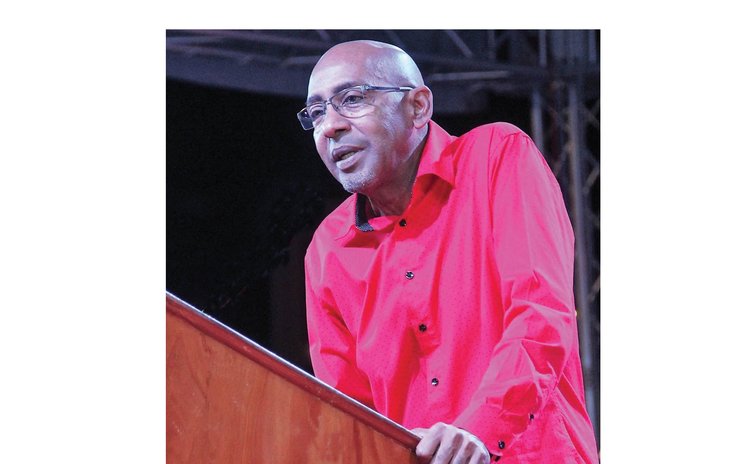 "Totally. The 'great beyond' is my final destination. That's where I want to end up, that's what my whole life is about, that's my sense of purpose."

"That's a major part of me because I have to understand why am I here, what is my purpose here so I can feel more grounded. I can't image we are here just by chance."

To understand Dr. Irving McIntyre - who was elected for the first time just a year ago and, as minister of health, was thrust into the limelight by the coronavirus pandemic mere weeks after his appointment – you have to go back to his past. Way back.

Having been raised on a farm in the tiny community of Fond Canie in the Roseau Valley, McIntyre learned to be grounded and to "appreciate life" from a very early age. They reared cows, chicken, rabbits, and pigs, and grew avocados, citrus, etc and he, along with his siblings, was integrally involved.

His bond with family and his connection to his adopted sisters, his friends, and even the animals, helped instill in him certain principles by which he continues to live. He learned the importance of building a healthy relationship with God – they went to church every Sunday as his father was a devout member of the Catholic church - he understood the need to have a similar relationship with family, he developed a commitment to vocation and he recognised that a strong character is paramount.

"The amount of work we pushed on that farm; it was no joke. We had to get up in the morning, milk the cows, feed all the animals, and we still had time to go to the river to bathe, get dressed and get to school for 8 o'clock. There's always work to do on a farm. Work is worship. You don't work you're not going to achieve anything," McIntyre tells The Sun in an interview shortly before preparing to attend church service on Sunday morning. "On the farm it was work but it was fun. And you had to be in church on Sunday as well. So it's work, worship and a combination of these things together that help you to turn out into the individual you are."

There's an unmistakable joy in his voice and a discernible glint in his eye as Irving recalls those days. The farm was fun, and so was mixing with the animals, bathing in the river and playing sports, particularly basketball, with friends.

"If I had to do it again, definitely. Growing up on a farm just makes you learn to appreciate life so much."

They were not financially privileged by any stretch of the imagination, recalls his elder brother, Angus. Their father had eleven children – seven with his mum, of which Irving is the fifth. The seven, along with adopted sisters and their parents, shared a two-bedroom wooden house, so space was tight, according to Angus.

"We used to sleep on ground [the floor]," the elder brother recalls.

With this many siblings sharing limited space there were odd moments of tension, but generally they got along quite well. His moments of mischief were limited to appropriating fruits and sugar cane from neighbouring plantations – once again the joy in his voice as he describes using a bread knife to cut the cane so there would be no noise. He also laughs as he recalls the lashes from his dad's belt whenever they were caught.

In high school – he attended the St. Mary's Academy – the young Irving tried weed – everyone experimented with it at the time, he says – but he never engaged in a fight.

Growing up Irving was "very tall" and a "very strong guy" who developed a passion for sport, particularly basketball, according to Angus. It was little wonder, therefore, that he pursued his passion by playing for the Cardinals in the national basketball competition while still at high school, before going on to represent Dominica at various tournaments overseas while still in sixth form. He remains engaged today as a sponsor and member of local basketball clubs in his community.

But it was his love for helping people and the call to vocation – once again, the influence of the farm - that attracted him to his profession. He considered dentistry and veterinary science – his eldest brother, Colin, is a vet – but in the end he settled on medicine.

"Growing up on a farm, growing up with a science background, growing up wanting to care, and growing up with my uncle, Desmond, also [being] a great physician, [made medicine] an ideal choice," he explains. "Medicine is…what makes me happy, and I think in retrospect that was ideal for me. I can't imagine myself in any other profession."

People who know Irving McIntyre well, including his brother, Angus, describe him as a "nice" person. According to Angus, Irving is down to earth and a "cool, easy-going guy'.

Yet, to the surprise of many, the married father-of-four agreed to contest the Roseau Valley seat for the Dominica Labour Party last year, replacing his eldest brother, Colin. While physicians have been known to become successful politicians, the two professions couldn't be further apart in terms of approach. The public crucifixion and relentless slaughter of the opponent's character which the average politician engages in appear incompatible with the person Irving professes to be.

He concedes that the two professions appear to be at odds, but he says politics also provides him with an opportunity to do something he loves: help people.

"From that point of view, I don't stray so much from my own principle in terms of 'yes, I want to help people,'" he says, while stressing that during the extended election campaign last year he never uttered a single negative word about his opponent.

When Irving wakes up in the morning, he says his prayers– his relationship with God at work - before he proceeds with his mission to do what's right for God and country, cognizant of the fact that in order to achieve greater things, he must do all the necessary good things first.

"At the end of it," he says, "I really want to know I've made my contribution; I've played my part."