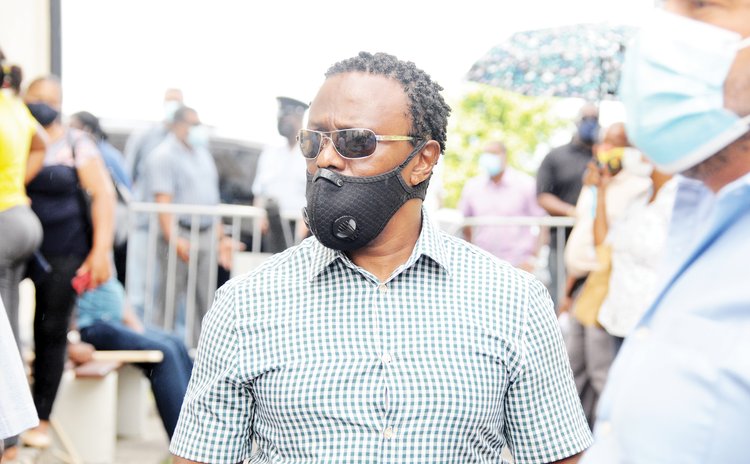 Mervin Jno Baptiste, one of three men who took 15 members of the Dominica Labour Party (DLP) candidates of the 2014 general elections to court for treating has withdrawn his case and has debunked claims that he has been bought, threatened, or had any falling out with Opposition Leader Lennox Linton.

But Jno Baptiste cites a lack of preparedness and support as his reasons for dropping the seven-year-old controversial matter.

When the Magistrate court sat on May 13, 2021, many, including supporters of the cause, were astonished to learn that one of the remaining two complainants in the 2014 treating matter had withdrawn his charge.

According to the indictment, leading up to the December 8, 2014, election, the government ministers did work together to corruptly influence the results of the election by engaging in the unlawful act of treating by hosting two free concerts at the Windsor Park Sports Stadium featuring Donnie McClurkin and Morgan Heritage contrary to Dominica's House of Assembly Election Act.

The seven-year legal battle went through the High Court, the Caribbean Court of Appeal, and, most recently, the Caribbean Court of Justice (CCJ). The CCJ dismissed the appeal in the matter of Roosevelt Skerrit & Ors [others] v Antoine Defoe & Ors and affirmed the order of the Court of Appeal by reinstating the Magistrate's summonses for the appellants to appear to answer the election charge of treating.

At the most recent court hearing, 12 of the 15 defendants present all pleaded not guilty to the charge. However, the biggest surprise came when Jno Baptiste withdrew his complaint which was met with an applaud from Prime Minister Roosevelt Skerrit, one of the defendants in the case.

"To the many people thinking that some kind of money would allow me to make that decision...I just want to say that I am not wired that way, my wiring is a different kind of wiring," he said during an interview on Civic Vibes with Loftus Durand.

Attorney-at-Law Cara Shillingford had represented the men throughout the legal battle. However, Jno Baptiste said he only learned from a friend that she had recused herself from the case in April, weeks before the scheduled court date.

"I began asking about other attorneys who started the case and I'm being told that those who were there from the beginning are no longer involved," Jno Baptiste said.

He said following such time he began receiving notices from the defendants' attorneys and the Director of Public Prosecution (DPP) requesting certain information.

"I'm then realizing that I'm really lawyer-less," he said.

"The heat for me was my family start getting unstable because everybody asking questions and for them, it was a frightening situation because when I went into that situation I told nobody and they heard it over the radio. For those seven years, my family has been going through a lot and I never took how they felt into consideration and I now realised I was selfish," Jno Baptiste said.

During the weeks leading up to the trial, he said he intended to go public with the fact that they had no legal representation but was advised against it as, on May 4, a meeting was held where new attorneys assigned to the case were presented to them.

"This is May 4, the matter is the 13th and the lawyers were asking questions because they were fresh on the scene. I left the meeting impressed by what I heard but not comfortable...in that situation, it felt wrong," he told the host of the programme.

He noted, on May 8, days before the case, he had arrived at his final decision to withdraw the complaint since, "I was completely stressed, and further the level of unpreparedness from my perspective, I made that decision and I then called the opposition leader and I spoke to him. He responded positively."

On the day of the hearing, upon entering the dock, the government's attorney Queen's Counsel (QC) Andrew Pilgrim advised the Magistrate that Jno Baptiste had something to inform the court. Many have questioned the reason why such an announcement came from the defendant's attorney which Jno Baptiste denied having any knowledge of.

Additionally, at the court hearing when asked, "were you threatened" Jno Baptiste responded, "not me personally but my family was."

He now claims that his words were misconstrued as he said his family was "frightened and not threatened."

"For the past three weeks, they have been hearing that I have no lawyer in such a big case and they have been seeing that I am being served so for them it was a frightening situation and that's where the pressure started mounting."

Though he withdrew his complaint, Jno Baptiste pledged his full support to St. Valle.

Absent from court were former MP Ivor Stephenson (due to illness) while Kelver Darroux and Justina Charles were out of state.

The former and current government ministers are being represented by Barbadian QC, Pilgrim who is lead counsel with assistance from Heather Felix Evans, Lennox Lawrence, and Jodi Luke. The Acting Director of Public Prosecution, Sherma Dalrymple also made an application pursuant to section 72 of Dominica's constitution, to have a watching brief in the matter. For the claimant, Julien Prevost, Ronald Charles, and Cara Shillingford appeared as amicus curiae (friends to the court), holding papers for attorney Dominica- born Antigua- based, QC Justin Simon.

At the hearing, the defense made an application for the third complaint in the name of Antoine Defoe to be struck out as the complainant is now deceased. This application was granted by Magistrate Pacquette.

The defense also presented another application to the court to have the matter struck out following a written request for an adjournment by the claimants' attorney presented to the court by Attorney at law Prevost.

QC Pilgrim put forward four grounds for his objection which included: "the claimant's refusal to give disclosure despite the defense "countless" request; the claimant requested a date for the matter to be heard in the Magistrate court hence his excuse that his attorney is not present ought not to be supported."

The QC attorney further stated, the fact that the defendants at their own expense made arrangements to answer the charge on the date set by the court wherein abandoning all work and family commitment and the letter from QC Simon does not address the court and gives no reason for his unpreparedness for the trial and failure to be at court, are grounds for dismissal.

However, Attorney Charles said he was astonished by his learned friend request and debunked the application.

According to him, as per the norms of the court, the summon date is set for case management based on the defendant's plea. Following this, he noted that the court set a date for disclosure and trial.

In handing down his judgment, Magistrate Pacquette labeled the application for dismissal as "premature" as it is the first time that the matter is before the court.

In making his decision he said that he was guided by section 76 of the Magistrate Code of Procedure which states that if a defendant pleads not guilty the Magistrate should hear evidence from both counsel and the defendant must be given knowledge of the evidence against him through the means of disclosure.