Michael Lees experiences Hurricane Maria in the Rosalie forest: "I was shocked at what I saw; I started to cry" 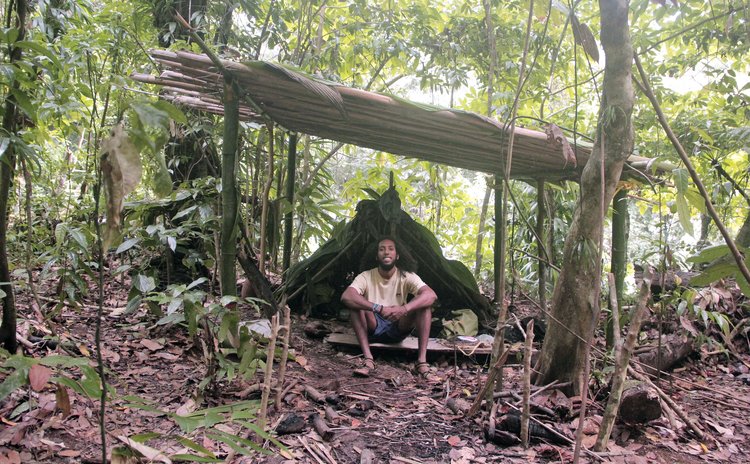 Michael Lees in the Rosalie forests before Maria

Michael Lees of Salisbury decided to take his chances and camp in a small hut in the forest of Rosalie while Hurricane Maria barreled towards Dominica with ferocious winds, drenching rain, deafening thunder and blinding lightening.

Lees says that was "a terrifying experience".

He said he spent Hurricane Maria in a palm-leaf hut in the forests of Rosalie against the advice of friends. He was there during a filming project involving scenes of progress to catalouge "where we are going and what we have left behind."

"I was living alone in the forest with Nature," he said.

"On that day September 18, 2018 while in the forest someone came and told me that I should not stay there since we would be hit by a category three hurricane. I paid no heed to that advice since I thought I could handle that and so I, sheltered by structure with more palm leaves and sat tight not expecting a category five hurricane to come my way," he said.

He continued: "My friend had told me that the hurricane would be coming very early my way but things really started to get bad after night fall. So all that time I am sitting in the hut waiting for something to happen but it was just wind whistling through and the rain. When night came it started to pick up wind and it was scary as it whistled in the still of the night. Sometimes, the wind was strong and then you would have a brief calm and then a sudden gust of wind whistling through; then you would hear the sudden crack of the trees falling all around. It's dark; you can't see anything and I am between two rivers raging through. I don't know what to expect but just praying for the best.

"Now, a tree which I was always worried about fall on my hut during the night and crushed everything down to about a foot or two off the ground. That kind of saved me since it pinned everything down and the hut could not fly away. So I spent the night in this place hoping and praying for the best and for day to come," Lees said.

He said he had to dig out some trenches during the night so that the water flowing on the ground did not affect him too much.

"It was a long damp night. I was scared and at some moments I thought it was the end. I was not afraid of dying but I did feel like it was going to come a little bit too early since I had stuffs still to accomplish in my life and people would have felt a bit pissed off knowing that I died in such a stupid way," he said.

"The morning I had to crawl out of the hut and there was not a lick of green. It was just gray. I was shocked at what I saw; I started to cry. That was a real experience and it makes you appreciate the power of Nature and the world as man always thinks he is the most powerful being but you then realize the scale and power of God in comparison to man.

"I would not do that again…I will not want to see another hurricane like that again. But given the issues of global warming it may just happen again. Since then I have only been to visit the hut once. The biggest impact is that it has made me thankful for all after being stripped to nothing; so you now say thank you to life. The lesson is that Nature doesn't play around and God is much mightier than man who needs to humble himself is the face of such power. We need to figure out how to live in the world instead of fighting it and behave"

Lees is now selling solar items as Dominicans brace themselves to endure this hurricane season.