JUMP BALL Part X : A peek at local basketball then and now 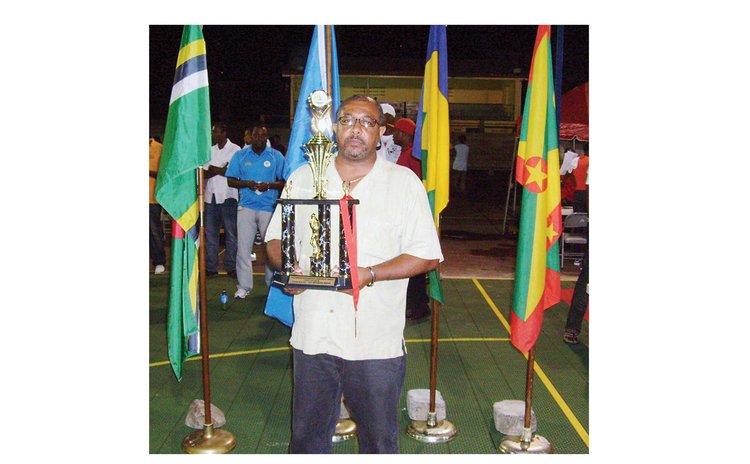 Mickey Joseph Sr. is one of a "couple" of names that can be considered synonymous with basketball in Dominica, and Mickey is one person who has been involved in the sport here for a very long time and is still active. For more than four decades now Joseph has been associated with various aspects of the sport here, such as playing, administration, coaching, managing, and even "refereeing".

Mickey got introduced to the sport of basketball in 1971, at the St. Mary's Academy (SMA), even before entering secondary school the following year when he immediately made it on the SMA Junior team. The other teams with which he played during his on-court career were the SMA Gnats - the senior of SMA's three teams at the time - where he served as Captain; he helped form Wizards in 1976; and was drafted onto the legendary Cardinals with which he played from 1979 through 1983.

Upon his departure from Cardinals, Joseph joined Pioneers, a team comprising of several former national players such as Bernard Thomas, Patrick Pemberton and others. During his time with Pioneers, the team won the Knock-Out championship in its early days.

While a member of Cardinals, Mickey toured with the team to Guadeloupe, Montserrat, St. Kitts and Antigua, and was elated to have been a member of the DABA Executive when Cardinals captured the OECS Champion-of-Champion Clubs Tournament here in Dominica in 1996.

While attending the Central Connecticut State University in the USA in the 1980s, Joseph played intra-mural basketball after unsuccessful trials to get onto the college team.

Mickey also played on the Dominica National Youth Team in 1978. One year later, he was selected onto the Senior National Team, and sported Dominica's national colours for five years until 1983. He was part of the team that represented Dominica at the first CARICOM Basketball Championships held in Guyana in 1981, where the Nature Island Boys defeated a stunned Barbadian team. As a national player, he also represented Dominica in "friendlies" in Antigua, Montserrat and St. Kitts.

Mickey notes that his highest individual game-score during his playing days was just over 40 points while he played for Cardinals, some time in the 1980s.

Following his exploits on the court, Mickey branched off into a different aspect of the game, viz. coaching. The first team with which he held the clipboard was Police Sports Club, when they played in Division I in the early 1990s. He later coached Knicks from 1998 through 2003, and during that time the team won no less than five (5) national championships in six seasons. Currently, Mickey serves as coach of X-Men in DABA's Premier Division and has been shouldering that responsibility since 2010; Knicks has won 2 championships under his directorship thus far.

Mickey Joseph also coached the Dominica National Basketball Team for over five years, and during that period the team participated in the CARICOM Basketball Championships, and the second revival of the Windward Islands Basketball Championships in 2010. Interestingly, three teams in that 2010 competition had topped the championships with the same win-loss record. However, when the tie was subsequently unbroken using FIBA's goal-average principle Dominica ended up placing third overall.

In 2008, Mickey served as National Coach for Dominica's first Women's Basketball Team, when the ladies travelled to Antigua to participate in the Gillian Brazer Championship; the Sisserou Girls placed 3rd among six teams in that tourney. Also, in 2012 Mickey became one of two FIBA Certified Basketball Coaches on the island.

Mr. Joseph has also served as manager of Dominica's Senior Men's National Basketball Team, and did so for a few years, beginning in 1992.

And, as if not to be outdone, Mickey has also officiated in several DABA league games, when one of the referees assigned for a particular game had failed to show up.

In addition to contributing to the game as a player, coach, team manager and a referee, Joseph has also served on the Executive of the Dominica Amateur Basketball Association (DABA). He functioned in various capacities, from Committee Member, to Treasurer & Public Relations Officer, to Vice-President, and to President, during the period 1980 to 2013 - with breaks, and not necessarily in that order.

It may be interesting to note that during Mickey's most recent stint on the DABA Executive, the association participated in Mas Domnik 2013 with a float in the form of a "backboard-on-wheels". Several players (in uniform), team officials, referees and well-wishers participated in that float as part of the Carnival Tuesday parade through the streets of Roseau. The 7six7 Sports Club "borrowed" that idea for The Real Mas 2017.

More recently though, Joseph was in the process of establishing a Roseau Basketball Development Committee in 2013. That body was being set up with the main aim of providing training opportunities for young people in two age-groups: 6-12 and 13-16 years old. The RBDC, using members' personal funds, had already ordered some basic equipment and balls, but the programme never really got going on account of the unavailability of a training venue.

Mickey notes that three crowning moments in his four-decade basketball career were when (a) under his Presidency of the DABA, Dominica won the Windward Islands Basketball Championships (1993); (b) the OECS Clubs Championships in 1996; and (c) as a player, being part of the Cardinals team while they won three (3) successive national League Championships (1979-1981) without the team conceding a single match.

And, when quizzed about which was the team that he enjoyed playing against the most during his playing days, Mickey was quick to respond – and with a bit of a chuckle – "Harks! Oh, I enjoyed beating Harks!" [Harks can be considered to be the predecessor of Blazers – the second most decorated team in Dominica's basketball history]

The above is a modified version of the first of a two-part feature entitled, "Mickey & Robo: Two Pillars in Our Basketball For Over Four Decades", written by this author and included in the 2015 Basketball Season Report of the DABA (also produced by this author).