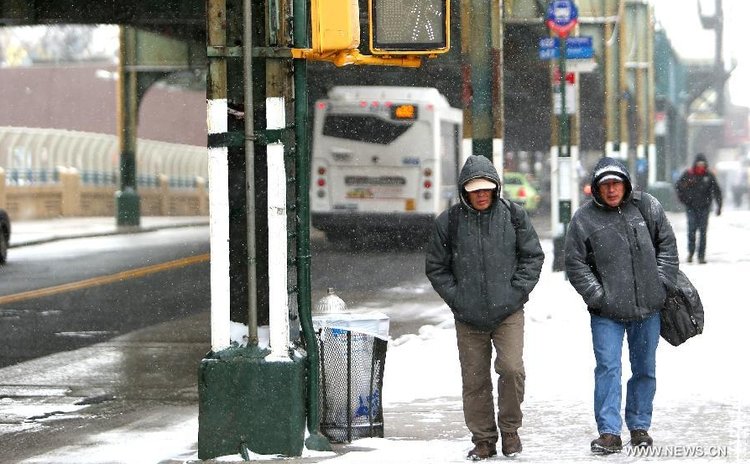 WASHINGTON, Jan. 26 (Xinhua) -- Millions of people living in the U.S. northeast on Monday took the brunt of a severe snowstorm and blizzard that is ravaging the region.

The U.S. National Weather Service (NWS) forecasters said the blizzard will last till Tuesday and bring heavy snowfall in the region, which is home to some 50 million people.

Through out the region, which includes New York City, Boston and Philadelphia, people are advised to get home early before the onset of traffic disruption, as the devastating storm could unload a paralyzing 1 to 3 feet of snow.

In New York City, snow was blowing sideways with ever- increasing intensity by mid-afternoon as flurries began in Boston.

Meanwhile, more than 5,800 flights in and out of the northeast have been canceled, many of which may not take off again until Wednesday.

At midday, more than 2,600 of Monday's domestic flights had been scrubbed, according to tracking service FlightAware.com. For Tuesday, 3,200 flights have already been canceled.

About half of all flights out of New York's LaGuardia Airport were called off Monday, while some 60 percent of flights heading into the airport were canceled. Boston's Logan Airport said there would be no flights after 7 p.m. Monday.

Schools and businesses along the route of the blizzard have let out while state and regional government offices have closed.

In some cities in the northeast, including the U.S. capital Washington D.C., snowplows and salt spreaders have been mobilized to deal with the tough blizzard that could result into dangerously windy blast and icy cover on the street.

In Washington, the House also postponed votes scheduled for Monday night because lawmakers were having difficulty flying back to the country's capital after the weekend.

Governors and mayors across the region have declared emergencies and ordered the shutdown of highways, streets and mass transit systems with the aim to prevent travelers from getting stranded and to enable plows and emergency vehicles to get through.

"It is not a regular storm," New York Mayor Bill de Blasio warned while ordering city streets closed to all but emergency vehicles beginning at 11 p.m. Monday. "What you are going to see in a few hours is something that hits very hard and very fast."

New York State Governor Andrew Cuomo also declared a state of emergency and urged commuters to stay home on Monday, warning that roads could be closed before the evening rush hour, even major highways such as the New York Thruway and the Long Island Expressway.

"New York State is taking all necessary precautions to prepare for this storm, and I urge residents to put safety first and plan ahead to protect themselves and others throughout the duration of this snowstorm," he said.

Boston is expected to get 2 to 3 feet of snow, New York 1 to 2 feet, and Philadelphia more than a foot. The National Weather Service issued a blizzard warning for a 250-mile swath of the region, meaning heavy, blowing snow and potential whiteout conditions.

Furthermore, the weather will force residents in coastal areas to face the possibility of damaging flooding and beach erosion, particularly in New Jersey and on Cape Cod in Massachusetts.

Officials in New Jersey shore towns warned people to move their cars off the streets and away from the water. Utility companies across the region put additional crews on standby to deal with anticipated power outages from high winds.

Massachusetts Governor Charlie Baker has warned residents to prepare for power outages and roads that are "very hard, if not impossible, to navigate."

Wind gusts of 75 mph or more were possible for coastal areas of Massachusetts, and up to 50 mph farther inland, according to NWS forecasters.

Traffic police in the U.S. State of Pennsylvania has confirmed a major road accident when a tractor-trailer jackknifed, and a beer truck crashed into the median near Harrisburg during the morning commute. So far, no injuries were reported.

In other snowstorm-hit areas, traffic accidents were also reported due to poor road conditions.

The snowstorm, which brewed late Saturday around the Iowa- Minnesota line and produced snowfall, blizzard, high wind, less visibility, heavy precipitation and the potential coastal flooding, will come to the end while it reaches the Gulf of Maine late Tuesday night after traversing its way through the northeast region, said NWS experts.