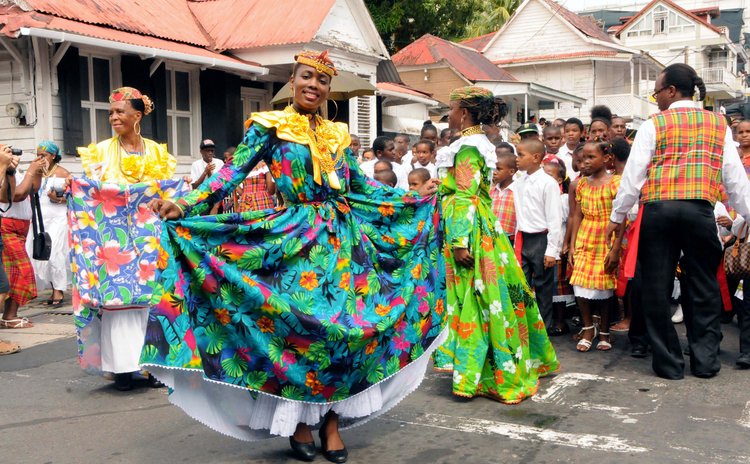 Showing off her colourful Wob Dwiyet

Merlyjah Benjamin, 20, of Grand Bay is Miss Wob Dwiyet 2014. Competing at the Old Mill Cultural Centre before a large crowd, Benjamin won the award for Best Creole Spectacular Wear made up of coconut fiber, flour bags and calabash.

Benjamin said her preparation for the pageant was difficult but she said hard work pays off.

"Oh yes, I had full confidence all the way round…Whenever I am on stage, that's just it because when it comes to lights, camera and action, I mean I am on the go; tonight me on the stage I was just being relaxed and enjoying myself, so I guess all that paid off ", she said. "Well, what made it different was consistency. I kept it up with my talent, my spectacular wear and obviously my Wob and thanks to God I had Him present in everything that I do. Before I came in on any round, I gave thanks to Him to help me to just be myself, relax and enjoy what it is I am going to do on the stage," said Benjamin.

She revealed that as a child she has always been involved in culture including being part of the Grand Bay Cultural Group.

"I dance mostly all the dances as you all know I take part in Grand Bay Cultural Group but Miss Wob Dwiyet has always been my pleasure looking at it and taking part in it right about now knowing that I emerged win for Grand Bay", she said.

Now that the competition is over her aim is to bring the youth forward. "Because too many times where hear this and that happening there is nothing good saying about the youth but me, being Miss Wob Dwiyet 2014 I am going to bring that change to the cultural life if the youth and Dominica on a whole".

The other participants of the competition were Tammika Tavernier from Soufriere, Sherine Dubois from Penville and Latoya Anthony from Woodford Hill.