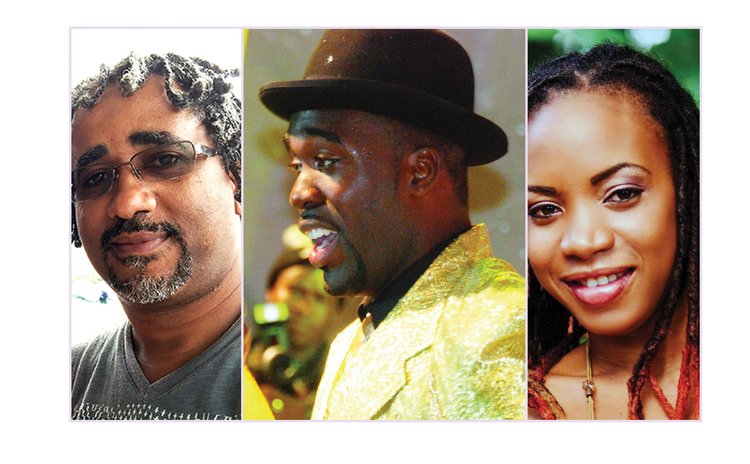 Phillip, Webb and Michele- some members of Music a Nou All Stars

They are among the leading lights of Dominica's music – Cornell Phillip, Michele Henderson, Elijah Benoit, Martindale Olive, Carlyn XP and Webster Marie- and they are combining to form the Mizik A Nou All-Stars at this year's World Creole Music Festival with an appearance on Night Three at Festival City, Windsor Park Sports Stadium, Roseau, Dominica.

They will combine their tremendous performing talents to deliver a highly anticipated performance highlighting the numerous hit songs from the four World Creole Music Festival Commemorative Compilations of the "Mizik A Nou" hit series. The Mizik A Nou compilations which coincided with the start of the WCMF in 1997, has been described as "a masterpiece representing the roots and future of Dominica's Cadence-lypso".

The "Mizik A Nou Hit Series" which was inspired by Cornell Phillip, Edmund Angol and now deceased Dominica Festivals Committee Executive Director Eddie Toulon, provided fans and festival lovers at home and abroad with a wide mix of Cadence-lypso music and helped to inspire a new generation of musicians to the power and creativity of the Dominican music. It gave fans something to hold on to as they celebrated the three nights of pulsating rhythms. The songs were anthems to fans and gifts to visitors and friends of the festival and Dominica's music culture.

The series produced a string of hits many of which have become a major part of the festival experience and the rich legacy of the festival over these past twenty years. The best known of the hits include Sa Ki Pa Ni, Jouer Kadans and Sa ki Sa-w in 1997; Hossey, Dancé Kolé, Sacrifice, and Ba mwen Bouyon in 1998 and Dominique Vivan, Rhum Sung, Espwa in 1999 and Sélébwé" in 2016.

This is certain to be a moment of great nostalgia and a time to relive the early years of the Festival. Come ready to dance, sing and to celebrate the 20 years of this great festival movement.