Montage Domnik: Backdrops for a dazzling display of personalities 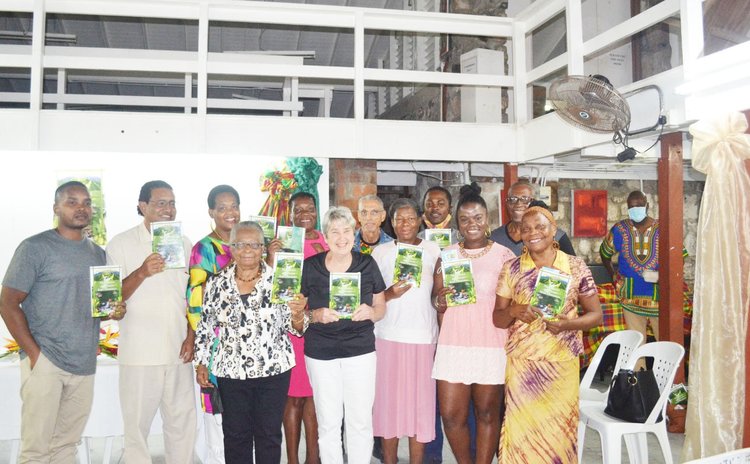 Group Photo of some members of "Waitukubuli Writers"

Readers are in for a treat when they open the pages of Montage Domnik and get a taste of the mélange of literary works by Dominican writers.

Stories that our grandparents told, yet still so relatable in this time, the publication promotes the work of fresh voices and established authors in vivid settings which serve as backdrops for a dazzling display of personalities appealing to readers of Caribbean fiction and beyond.

At a book launch on February 28, 2021, publisher and one of the authors in Montage Domnik, Kristine Simelda, told the audience that the title of the book describes not only the lush physical landscape of the island but also the soring fertile imaginations of its contributors.

"This colorful collection serves as a platform to expose and persevere new work from 24 of Dominica's most energetic writers at home and in the diaspora," she stated.

"As many of the themes are outside the standard worldview, voices that have never been heard before are showcased within the pages of Montage Domnik," Simelda added.

In dialect, standard English and creole patriots, these stories and poems address a wide variety of relevant Caribbean issues namely, the quest for cultural perseveration and the importance of family values is examined whilst the influence of folklore and superstition, migration, crime and natural disasters are explored and is all presented from an island-based perspective rather than through a distant spyglass.

The publisher urged everyone who reads the collection to embrace its diversity and ignore the influences that minimalize literature from beyond the mainstream.

"Island books matter and the time has come to liberate these creative voices in print," Simelda declared.

Roy Sanford, another founding member of WW and author said, the anthology aims to provide a platform for the writers in Dominica.

Guided by their mission statement, "crafting authentic literature from Dominican writers for readers at home and around the world," the group hopes to earn a "well-deserved" place in the archives of Dominica's literary culture.