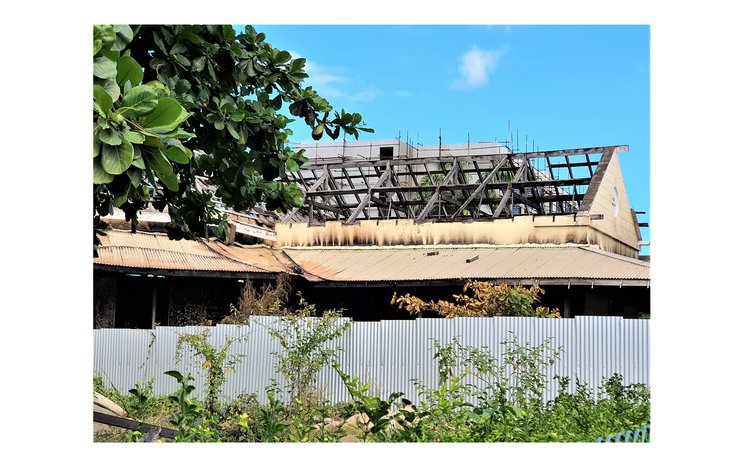 Roseau Public Library after the recent fire in September 2021

A pillar of flame once again rose above the remnants of the 115-year-old Public Library in Roseau on the evening of September 22, 2021, the fourth fire in four years.

The Public Library Carnegie building was de-roofed by the unrelenting winds of Hurricane Maria in 2017 and since then the structure has stood abandoned leaving many to call for its preservation and restoration.

While there was no report of injuries or damage to neighboring buildings, fire officials and police said they had suspected that arson was at play. A mentally ill man who was seen leaving the compound at the time of the fire was apprehended by the police.

The fourth fire in four years has yet again prompted calls for government action; one call came from Dominica's Society for History Architectural Preservation and Enhancement (SHAPE).

In 2020 following the first three fires, SHAPE started a petition which formed part of their campaign for the restoration of the library. To date, the group is reporting over 6,000 signatures.

"An overwhelming public support from all walks of life for its (the Public Library) preservation," SHAPE said. While the organization welcomed the support of the public for the cause, SHAPE expressed concerns over the government's failed commitment and lack of urgency in addressing the issue.

"The people of Dominica, especially the youth, do not have a proper library nor the cool and tranquil grounds to read, relax, meditate, and be inspired by," the organisation stated in a social media post.

SHAPE added: "After repeated calls and attempts to meet with the relevant authorities, we were invited to sit on the committee that is supposed to govern the operations of the Library and discuss the way forward, but to date, nothing has been formalised nor a single meeting convened."

Last year the group reported that Roseau MP Melissa Skerrit stated at a meeting with some members of the SHAPE board that there were proposals for a three-storey building to house a library on the ground floor, a music studio on the first floor, and a dance studio on the top floor.

With no known action having taken SHAPE had questions.

"When will the library committee be formalised and a meeting convened, allowing SHAPE and other relevant stakeholders to work with the government in determining the future of the library? What's the government's position on our Architectural Heritage that constitutes who, where, and what makes us Dominican?"

SHAPE said it feared that at this rate Dominican may be left with only photographs of a lost heritage.

"We ask that the government give this matter urgent attention, and we pledge our efforts to seek funding and provide expertise in shaping the future of this historic site. Despite this being the fourth fire, the Library still stands strong which shows the skilled craftsmanship that was put into this building over 100 years ago. Is she (the library) saying something?"

Local historian Dr. Lennox Honychurch also reported that despite "many promises and much talk" nothing has been done.

According to Dr. Honychurch, in 2007 he provided sketches for an enlarged library which included preserving the old library as a lecture hall, exhibition gallery, and small theater.

"Fire followed fire apparently set by drug 'parros' living in the basement. A library must be rebuilt. But there are some who would prefer for it to become a car park. Such lack of commitment defeats the spirit after years of trying," he wrote.

The historian stated that this is not the first disaster to the roof of the library as in August 1979, Hurricane David caused similar destruction but at that time the response was "speedy" by library staff, headed by Mrs. Cornelia Williams, and by November 1979 the roof was back and the library was fully restored and back in service in early 1980,

"No such luck this time around," he wrote.

The Roseau Public Library was built in 1906 and designed by the then administrator Sir Henry Hesketh Bell whose sketches show that originally it was to have been a two-storey building. The library was funded by a Scottish-born philanthropist, Andrew Carnegie.

Formally its opened on 11th May 1907, the library provided knowledge and education through the provision of books, magazines, etc. free to all who lived and worked in Dominica. It also coordinated the operation of the branch libraries around Dominica.

It would seem now, that given the frequency with which fires have been eroding the structural and architectural integrity of the Roseau Public Library, there may be little, if anything at all, left to demolish.

The U.S. Embassy in Bridgetown, Barbados has pledged its support in preserving the library's "history and educating its young people."