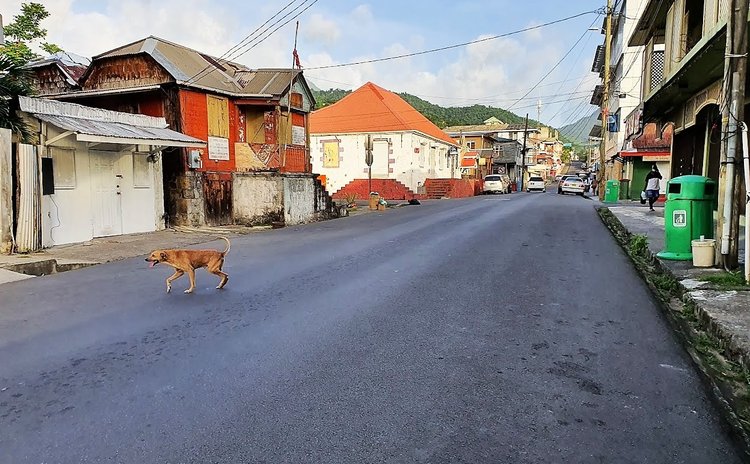 A dog crosses an empty Independence Street, Roseau during the curfew

Within one month, Dominica, which for the past year was among the small percentage of countries that recorded no COVID-19 related deaths, is now, within days, reporting four fatalities due to the virus. On August 17 the country marked a grim milestone as a 46-year-old woman was announced as the first COVID-related death. On August 27, Chief Medical Officer Dr. David Johnson said more Dominicans had lost their lives to the virus that has killed millions globally. "Our second COVID death was a 70-year-old male with underlying conditions who was admitted to the COVID Isolation Unit on August 8th, 2021," Dr. Johnson said. "This patient subsequently tested negative on PCR and was discharged for transfer to the Dominica China Friendship Hospital. However, the patient subsequently succumbed to the illness on August 26th, 2021." He said the third death was a 78-year-old male with pre-existing conditions who were admitted to the COVID Isolation Unit on August 18th, 2021, and who also died on August 26th while the fourth was a 74-year-old female with underlying conditions who have admitted to the COVID Isolation Unit on August 22nd, 2021 and passed away on August 27.

A Marigot native, 32-year-old Ricardo Christmas has been shot and killed in the neighbouring island of Antigua and Barbuda on August 25, 2021. According to law enforcement, the deceased was sitting in the vicinity of Country Pond, along with two other males at about 9.40 pm when an unknown assailant walked up to the area and discharged a firearm, shooting him twice- one in his back the other in his head. Christmas's family is offering a reward of $25,000 to anyone who can provide information leading to the arrests of those involved in the crime.

This past week, the Government of Dominica lifted the Emergency Powers (Curfew) Order which came into effect on August 3rd, 2021, and was extended for three weeks. Despite the lift, several measures continue to be implemented to control the spread of the coronavirus. As of August 24, Cabinet has approved the new Environmental Health Services (COVID-19) Regulations under Section 30 of the Environment Health Services Act Chapter 42:01 to deal with the management of COVID-19. All night clubs, bars, gaming establishments, and gyms remain closed; business establishments also remain closed on Sundays under the Environmental Health Services Covid-19 SRO 26. Opening hours of businesses that are allowed to open at this time are from Monday to Friday 6:00 a.m. to 6:00 a.m. and Saturdays 6:00 a.m. to 1:00 a.m. and all business establishments remain closed on Sundays.

Prime minister Roosevelt Skerrit is calling on parents with children aged 12-17 to get them prepared to be vaccinated against the coronavirus. Health officials have announced that a batch of Pfizer vaccines -which experts say can be administered to children in that age group- is on its way to Dominica. On August 23 the Food and Drug Administration (FDA) announced its full approval of Pfizer-BioNTech's two-dose vaccine, the first-ever Covid-19 vaccine to receive this status since the pandemic began. While children aged 12 through 15 can get the Pfizer vaccine through emergency use authorization, Monday's approval does not cover that age range. So far, no Covid-19 vaccine has been authorized or approved for children under 12, although officials say this could come in the next few months.

The Commonwealth of Dominica Police Force (CDPF) is reporting the seizure of nearly a million dollars which has now landed a Wesley man on $120,000 bail following his arrest for money laundering while another individual is under investigation for the same crime. As stated by Police Public Relations Officer (PRO), Inspector John Carbon on August 12, 2021, the police and other law enforcement officials executed a search warrant at a building occupied by Brenton Williams of Wesley who resides at Picard, Portsmouth. During the search, 296,680 euros equivalent to EC$943,850.13 was found and seized. Williams was arrested and charged with money laundering and later appeared before a magistrate where he was granted $120,000 bail and the matter was adjourned to November 19, 2021. A 24-year-old male is under investigation for having in his possession 149,000 euros equivalent to EC$473,974.44 as well as EC$50,000. The money was found on the same day, in Picard in vehicle registration number TM536 which was at the time occupied by the 24-year-old. The cash was seized and has since been deposited into the proceeds of the crime detainer fund account.