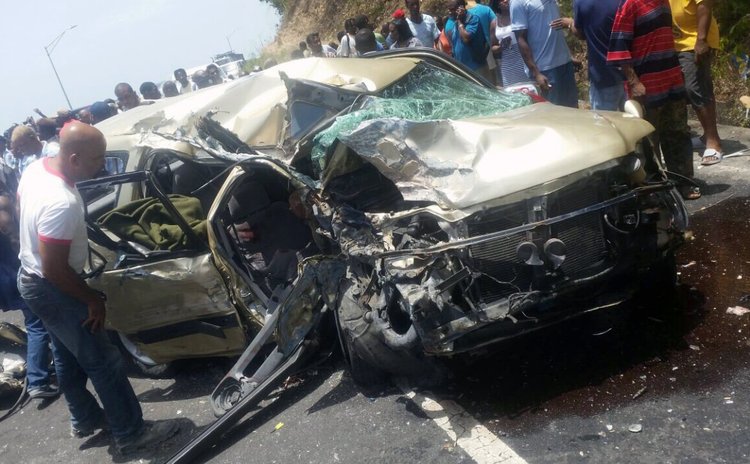 If the just-ended August Monday holiday was a typical holiday weekend in Dominica we expect to hear news of at least one vehicular accident and multiple road fatalities. Let's hope this weekend was an exception.

The drivers may have crashed because they made that fatal mistake, and their friends and family let them, of drinking and driving.

Or they were driving substandard vehicles, with faulty tyres and brakes or defective headlamps.

Or the roads on which they were driving were extremely narrow, potholed and dangerous.

Or there were no traffic signs on the roads.

Or there were no speed bumps in areas frequented by tourists and children, such as the Botanic Gardens.

Or the drivers were using smart phones, texting and calling, while they were driving.

But the number of fatal road accidents that has occurred in Dominica during the last few years tell us that we do not seem to care much about avoiding accidents by taking a few basic actions.

Of all the many accidents that occur frequently the most distressing was the death of 10 year-old Natalia Matthew of Bath Estate who lost her life after a vehicular accident on June 6, 2018.

Matthew was a student of the Roseau Primary School and she was crossing the Bath Estate main road at about 5:45 pm when she was hit by pick-up truck. Residents mourned by holding a vigil for Natalia but as time has passed the memory of that accident has faded.

But the residents of Bath Estate and especially Natalia's family could have used that unfortunate incident to do something positive about developing safer streets so that other children's lives would not be snuffed out before they achieved their true potential.

Americans are great at doing something positive out of negatives. An example is that families in New York who lost children, like Natalia, have formed a group that they've named: "Families for Safe Streets". The groups website states:

"We bear witness to our pain and suffering in order to eliminate fatalities and injuries on our streets. We seek to make it socially unacceptable to drive recklessly and press for solutions like safe multi-modal streets to prevent other loved ones from enduring injury or harm. We envision a city where pedestrians, bicyclists, and vehicles safely co-exist by encouraging the rapid implementation of Vision Zero. We encourage others to join our Advocacy work.

"We gain strength from the emotional support we share from each other's experiences because traffic crashes can be unimaginably difficult. We offer a wide range of support services because no one should have to endure this alone. Also, building upon our collective knowledge, we created a resource guide to help others through this painful and complex process. Our Peer Support and Resource Guide can assist you. Get in Touch."

As we said in an earlier editorial, though the number of deaths due to traffic accidents in Dominica may seem miniscule, we are of the view that given our extremely lax road safety standards and our poor roads only God knows why there are not more frequent fatal injuries on our roads. It is, we believe, high time to take action to improve road safety in Dominica. But the issue of road safety is universal.

Each year, according to the UN, about 1.3 million people lose their lives due to road traffic accidents and it is projected that this figure could rise to 1.9 million deaths by 2020, if remedial action is not taken. The UN estimates that road traffic accidents are the major cause of death of young people aged 15-29 years worldwide. Dominica's Ministry of Health has reported that for the period 2000 to 2009, motor vehicle accidents were the leading cause of death among young persons aged 15-24 years and was the second leading cause of death for persons aged 25-44 years.

But most importantly we urge our legislators to join other countries the world over, to urgently enact laws to restrict drivers from using cell phones whilst driving, to use seat belts and to avoid drunk driving.

And why is the police not insisting that the Ministry of Works build speed bumps in areas wherever people and vehicles are in close proximity such as near playgrounds and schools, in parking lots and multiuse areas where aggressive driving is a safety risk for pedestrians. Speed reduction is one way to protect people in these areas. An example is the Botanic Gardens, where the road surface has been improved and where children play, walk carelessly with headphones glued to their ears and significantly, where cruise tourists roam. The Discover Dominica Authority should take note.