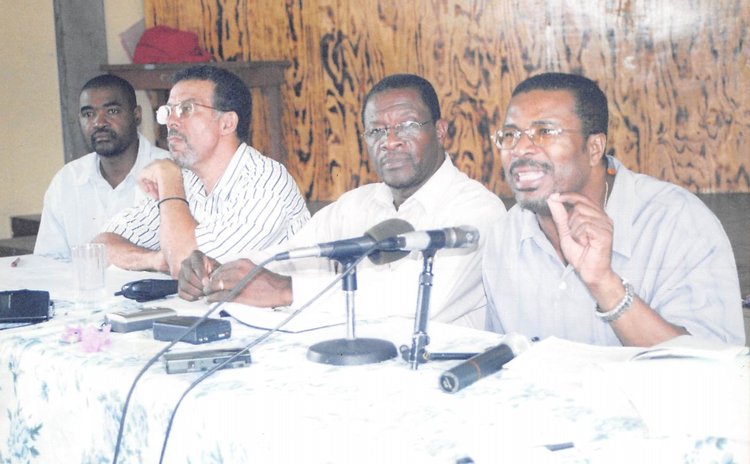 Timothy,extreme right, and other members of the UWP administration

An senior Canadian immigration official at the High Commission in Trinidad has confirmed the arrival in Toronto of a "large group" of Chinese nationals carrying what appears to be valid pass-ports issued recently by Dominicans.

But David Dupul, first secretary and a supervisor at the immigration section of the High Commission refused to confirm the number of Chinese who arrived with these "passports of convenience," saying he was limited in what he could say because of a privacy act which restricted the information he was able to divulge.

But the Toronto Globe and Mail reported last Saturday that there were more than a dozen who arrived on a BWIA flight from Trinidad carrying little luggage or much in the way of winter clothing.

Law enforcement authorities in Toronto believe the group might be part of a smuggling operation which take advantage of Dominica's Economic Citizenship Programme, where they spend at least US$50,000 for instant citizenship. Like his colleague in Toron, Dupul confirmed that an investigation is underway.

"Each of them would be looked at just the same as any other applicant to enter the country and in these kinds of cases if there were any concerns then they would be referred back for more detailed interview and a determination in the end as to what their actually purpose in Canada is," Dupul told the Sun. Dupul would not say where the Chinese are being held nor would he confirm if the immigration officials are holding them. But one law enforcement source in Toronto said there are several concerns. One is that if the arrivals from Dominica are re-leased after examination they could go underground.

"There are certain. procedures under the immigration act, and regulations and a per-son coming to Canada has the right to present themselves, present their case for entry and if necessary be referred for an inquiry to determine ultimately what their purpose is in Canada and (through) that inquiry the adjudicator will determine whether or not they are genuine visitors and they can be sent back to the country from which they came," Dupul told the Sun.

"If Dominicans with pass-ports, whether they are originally from China enter Canada I think they should be treated like bona fide Dominicans," Timothy said.

The finance minister said Dominica would have screened the applicants and there was nothing to indicate they were smugglers. But earlier this year Australia's most wanted fugitive, who sought to avoid extradition from Spain by be-coming a citizen of Dominica, passed through the screening process. Christopher Skase fled to Spain eight years ago after the collapse of his Qintex media, hotel and resort empire left him with corporate debts of almost $1 billion. He reportedly carried $6.5 million in cash, art and antiques. In an interview with the Associated Press, Timothy insisted Skase "isn't a criminal - he's a fugitive."

The US programme, they say, applies to approved people who invest $1 million in a business employing at least 10 people or $500,000 in designated economically depressed areas. In two years, the investor can apply for permanent residence, and then must wait five more years to apply for citizenship. "It gives foreign investors the opportunity to earn an immigrant visa by putting their own capital at risk and creating jobs in the United States," said Russell Bergeron, a spokesman for the US Immigration and Naturalization Service. In Dominica's case it's not clear how much economic citizens are charged since there are several "agents" assigned to the programme, who must themselves be paid by the applicants. But US$50,000 goes to the government and citizenship can be obtained in as little as three weeks.

"I wouldn't make any comment in terms of comparing programmes," Canadian immigration official David Dupul told the Sun. "Each country has the right to set up their own programmes," he said.

"Dominica's boast of "absence of tax treaties or ex-change agreements with any other country" and the economic citizenship programme run by the government. They will sell citizenship along with the right to a new name on a new passport," the influential Washington Post in a recent article, quoted US officials as saying. However, Timothy dismissed the article.

In a report in March the US State Department for the first time cited economic ship as an impediment to fighting international crime. It said Dominica had report citizenships to up to 300 Russians "increasing suspicion of Russian money- laundering on the island. The Associated Press recently quoted Timothy reported as saying the government has stopped granting citizenship to Russians. Timothy denies this.

" We have never accepted Russians (and Columbians) in terms of our offshore banks but it has nothing to do with the Economic Citizenship Programme, we halve nothing stopped accepting Russians, " he said