After the most recent protest at Morne Daniel, the Concerned Citizens Movement (CCM) says it is planning more of the same 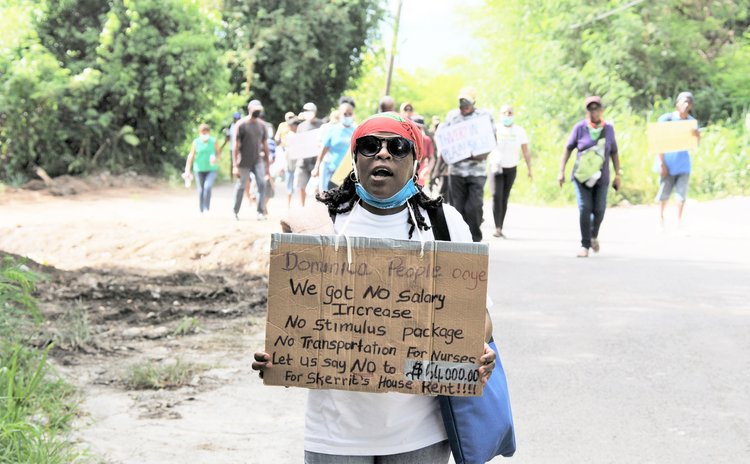 Protester on walk to Skerrit residence at Morne Daniel

"We will be doing several protests around Dominica especially where the jobs have been going to foreigners, the contracts have been awarded to the foreigners," said Earl Bruno, the new CCM president.

Bruno spoke to the SUN following a demonstration of about 100 people at Canefield, close to Auto Trade, and near the residence of Prime Minister Roosevelt Skerrit at Morne Daniel.

Recently the opposition United Workers Party (UWP) raised concern, in parliament and elsewhere, about Cabinet's decision to authorized EC$32,000 per month for the renting of a building to be designated as the official residence of the prime minister.

During the debate on the budget earlier this month Lennox Linton, the Leader of the Opposition said wages, supplies and materials, operating and maintenance services, professional and consultancy services, insurance, sundry expenses and other machinery and equipment increased that figure to $771,598 or $64,300 per month. The CCM protest on Friday was a reaction to that new controversy.

"(The objective of the demonstration was) to create some form of public awareness and to bring an end to that level of plundering of the country's resources," said Bruno. "Our goal is to bring back some sanity and pride and dignity into Dominica once and for all."

In the burning mid-afternoon sun on Friday, at Canefield, the protesters stood near a recently installed temporary barricade manned by at least seven police officers dressed in military fatigues. Some of the placards they carried read: "Let's say no to $64,000 for Skerrit's House Rent"; "Corruption and Poverty"; "2.2 billion- where is it" and "Dominica is in Big Danger."

After standing near the Auto Trade compound for at least an hour, the protesters then walked about half-mile uphill towards the site of the building that is expected to become the residence of Prime Minister Skerrit. There they met with another police barricade.

Apparently Bruno liked what he saw at the demonstrations.

In Parliament, when he addressed the issue of the cost of renting the Morne Daniel residence, Prime Minister Skerrit said cost was not the issue.

It appears that dissension, like the CCM demonstration last Friday, has hurt Prime Minister Skerrit's feelings.

Saying that since he is now being subjected to a level of embarrassment, when he eventually leaves office, "I will be crusading for ensuring that this country and its citizens never expose a prime minister to that level of indignity that they have exposed me to. I won't be here for long, Mr. Speaker, but we should never as a people expose our leader to that level of indignity."