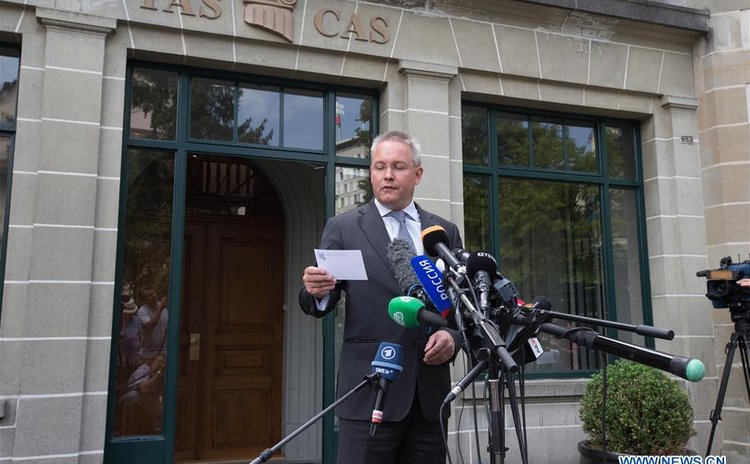 Secretary General of the Court of Arbitration for Sport (CAS), Matthieu Reeb speaks to the journalists at the headquarters of CAS, in Lausanne, Switzerland, on July, 21, 2016.

MOSCOW, July 21 (Xinhua) -- Russian officials expressed Thursday their regret over the decision of the Court of Arbitration for Sport (CAS) to uphold the ban on 68 Russian track and field athletes' participation in the upcoming 2016 Summer Olympic games.

"I can clearly express deep regret over the decision of the Court of Arbitration for Sport, which applies to absolutely all of our athletes, as from our point of view the issue of collective responsibility can hardly be acceptable," the Kremlin spokesman Dmitry Peskov was quoted as saying by the RIA Novosti news agency.

In November 2015, the International Association of Athletic Federations (IAAF) suspended the All Russia Athletic Federation (ARAF) from its membership, thus depriving Russian track and field athletes from participating in the 2016 Olympics.

The decision was taken after an independent commission claimed evidence of widespread doping use among Russian track and field athletes.

The Russian Olympic Committee (ROC) and the excluded athletes have filed an appeal to CAS based in Lausanne.

Earlier in the day, CAS rejected the appeals and confirmed that the IAAF decision had been taken in accordance with the Olympic Charter.

"We will think what steps to take next, as we are not going to leave the track and field case alone," the Interfax news agency quoted Mutko as saying.

On Monday, the World Anti-Doping Agency (WADA) issued a statement, recommending the IOC to suspend the whole Russian team from the 2016 Olympic Games due to an independent investigation on the Russian state involvement in manipulating the doping control.