Murder accused Rodman Moses Lewis: "I not going to run" 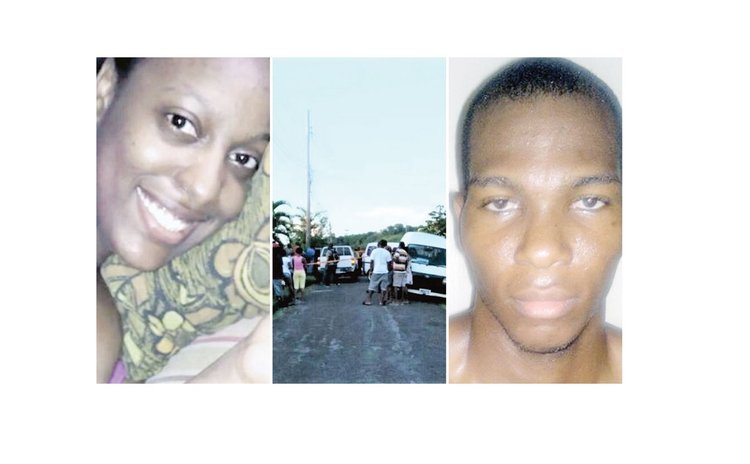 Accused murderer, right, site of the crime, centre and victim

The trial of Rodman Moses Lewis of Goodwill for the murder of his former girlfriend Triscia Riviere, 26, at Cherry Lane, Simon Bolivar, Stock Farm on Tuesday November 3, 2015 came into its fourth week beginning on Monday October 26, 2020.

A jury of five men and four women are hearing the case which is being presided over by Justice Wynante Adrien-Roberts at the Roseau High Court.

Legal challenges by defence Counsel Anthony Commodore and counter arguments by State Attorney Sherma Dalrymple occupied the court for most of the third week of trial. Police Inspector George Theophile was cross examined by the defence lawyer on Monday October 19 while Dr. Randy Fabien who was on duty at the Accident & Emergency Department of the Princess Margaret Hospital gave his evidence over two days.

Preceding the expert in scenes of crime unit of the criminal investigation department (CID) Inspector George Theophile in taking the witness stand, were Police Inspector Roy Pascal and Corporal Naford Joseph of the Simon Bolivar community.

Pascal, a retired police officer, was at his home on the southern end of Cherry Lane which exits into Allamander Drive getting prepared to attend the cultural gala at the Windsor Park Sports Stadium when he heard what sounded like a female screaming at the top of her voice.

Pascal said he went to the area to inquire as to what had happened. On his way he saw Corporal Joseph closing his gate on Alamander Drive, two houses away from his home. John Baptiste was still in front of his home. Perseus Thomas was standing on the eastern side of the road. Pascal spoke with Thomas and entered 25 Cherry Lane, the house adjacent to that of Sylvestre John Baptiste. He called "good afternoon" but got no response. The door was slightly ajar, he opened it a little more, looked in and again said "good afternoon!"

Pascal saw Rodman Moses Lewis, the accused, coming from a bedroom with a phone in his hand. He came in the living room and he said: "yes!" Pascal introduced himself and said that he had come to check. The accused continued into the kitchen area and said: "Look she down there. She out of it! She gone!" Inspector Pascal in his first look into the kitchen saw nothing and so asked the accused what he meant? He said, "I did it. We had an argument. I lose it."

Corporal Naford Joseph came into the house about this time so Pascal left Rodman Lewis in the care of Joseph and went back into the kitchen and looked. He saw Triscia Joseph lying motionless on her back in a corner on the kitchen floor. Her head was towards the north and her feet to the south and the right leg bent at the knee. He saw lacerations to the head, and the left cheek looked sunken. She had on a blue and white dress, the lower part of which was raised above her hips thus exposing her whitish underwear, and what appeared to be thick dark blood on the floor in the area of her head.

He noted a 20lb blue propane gas cylinder near the head of the body. There was also another 20lb blue cylinder near the northern end of the kitchen. There were blood splatters about, one of which was about five feet above the floor. After his observations, Pascal returned to the living room and called the CID. He then arrested Rodman Moses Lewis on suspicion in the death of Triscia Riviere.

Lewis told him, it happens already. And to another question, said, it was the cylinder.

Joseph went into the kitchen when Pascal came out. He was at his home having a rest when he received certain information. He got dressed and made his way to Cherry Lane. He saw some of his neighbours gathered on the road and Pascal ahead of him walking towards that area, so he followed him.

Joseph identified himself to the accused, and asked: where was the girl. He replied: "She is in the kitchen on the floor. I lose it. I know what I did! I not going to run!"

Pascal returned to the living room and Joseph went into the kitchen. The body appeared to be lying in what was a pool of blood. His descriptions matched those of Pascal.

According to Joseph, the mother of the deceased arrived and asked the accused for Triscia.

Nonetheless, she went into the kitchen and broke down, and began screaming and crying very loudly.

The father of the deceased next came in with a prison officer and they went straight to the kitchen area accompanied by Mr Pascal, said Naford Joseph.

"As soon as the father of the deceased went into the kitchen area he became very angry and rushed back into the living room. Mr Roy Pascal, the prison officer and myself had to restrain him," Joseph said.