Kenrick Tyson faces judge and jury for the second time 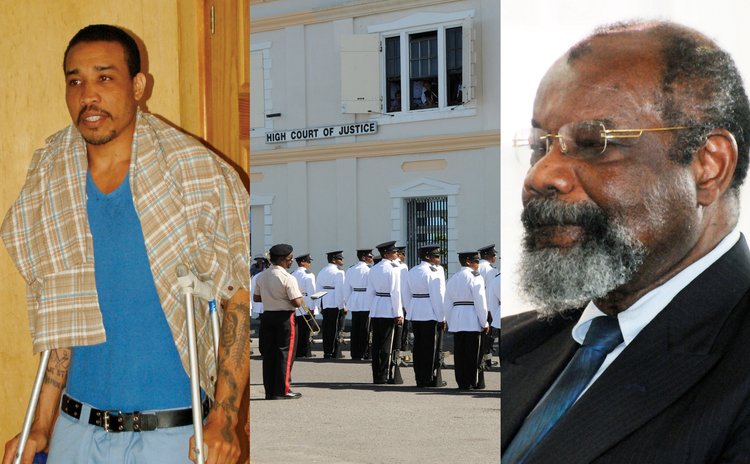 The retrial of 33-year old Kenrick Tyson of Sineku, Kalinago Territory for the murder of 48-year old Cecil James, 48, of Concord had an unexpected extended duration when the jury of eight women and one man asked the Roseau High Court presided over by Justice Errol Thomas for the recall to the witness stand of state witnesses Police Inspector Romen Riviere and former girlfriend of the accused Narsha Daniel for clarification on parts of their evidence.

So when lead Defence Counsel Bernadette Lambert (along with Wayne Norde) was expected to make submissions following the closure of the State's case on Thursday April 23, 2015, the State had to recall Inspector Riviere to the witness stand to respond to Daniel's clothing recovered by the police during their investigation in the wake of James's between 9 and 10 May 2009. The clothing was mostly Narsha Daniel's underwear.

The State, represented by attorneys Sherma Dalrymple and Fernillia Felix, was unable to get Daniel in court, and so Errol Thomas adjourned proceedings shortly after 2:00pm to Friday April 24. This is the second time that Tyson is being tried for murder. At the end of the first, a jury convicted Tyson of the murder but judges of the Eastern Caribbean Supreme Court subsequently overturned the conviction and ordered a re-trial after having determined that the first trial judge had made some grave errors.

During the second trial the State called nine witnesses, two of whom explained the unavailability of former police photographer Martin Desmond Austrie who was retired from the Police Force and migrated to the United States Virgin Islands; his evidence given before Magistrate Evelina E M Baptiste on June 23, 2011 during which he submitted two CDs with photographic exposures and 14 photo albums.

Evidence disclosed during the trial disclosed that Inspector Romen Riviere received a report at the Marigot Police Station about 3:00pm on May 10. He left for Lot 6 to Hibiscus Valley Inn with another police officer. On his arrival about 3:30pm he was met by a distraught Nigel Warrington, a fellow employee of the deceased.

Nigel Warrington of Marigot was the chef and caretaker and lived at Hibiscus Valley. James drove a gray Suzuki Jeep registration TC754 and was the lover of the owner.

Warrington said he got up about 5:00am.

"I noticed the jeep was not there," he said About 9:00am he spoke with a female worker and left for his home at Marigot. At a place called Ma Tommy Hill, between Hibiscus Valley and Marigot, he came across Cecil James's vehicle jammed against a bank on the side of the road. The jeep had a flat tyre and the windscreen was broken. He called the son of the owner and continued to his home, where he received a call from the secretary at work. He went and changed the tyre on the jeep and drove it back to Hibiscus Valley. Then he went across the road to the home of the owner, looked inside and found Cecil James lying on his back. James was lying in what looked like blood and many flies. At this point in his evidence Nigel Warrington broke down in tears. The two men had worked at the inn for about five years.

After making his observations including the layout of the property, Inspector Romen Riviere went to the house of the owner and James. There he saw James's motionless body whom he recognised. The body was naked with part of the legs covered with a sheet. He noticed a thick red substance which looked like blood on the face, mattress, the floor underneath the body, on the ground underneath the floor and also the two pillows. The placed looked ransacked.

The police inspector called the Marigot Hospital and got Dr. Martin Christmas, the medical officer on call, to the scene by 3:40-3:45pm. Dr. Christmas examined the body of Cecil James and pronounced it dead. The doctor also noticed blood in the mouth, nostrils and head area. He observed pronounced swelling to the head which could have been the result of blunt injury. The swelling was irregular and was heavier where the concussion occurred. He estimated death occurred at between eight to 12 hours earlier.

Francisca James, the estranged wife of the deceased, identified the body to Pathologist Dr. Oviedo at the Princess Margaret Hospital mortuary when he performed the autopsy on Monday May 11, 2009. James was buried at Marigot on Friday May 22.

Inspector Riviere met Narsha Daniel at the Marigot Police Station on Sunday May 17 about 6:00pm. He got in touch with her mother and aunt on different occasions during his investigations because of her age.

Narsha Daniel was a 15-year old girl in May 2009 with a two-year old son. She had met Kenrick Tyson through her aunt and they became lovers when she was 12 years old. She lived in the heights of Sinekou with Tyson in a shack made of tarpaulin, wood and bush. They'd brought their child to the aunt at Sinekou and gone back to the heights on Saturday May 9, 2009 at 12-1 o'clock in the afternoon. Tyson told her to get dressed and they left walking through tracks until they got to a trash shed at Concord at night. Tyson had a bag, gun and torchlight.

They went to Hibiscus Hotel, and were in a house on Hibiscus Inn property when Cecil James arrived in his jeep. They waited. She saw the man open his windows. She fell asleep and was awakened by Tyson and they went to the man's house. Tyson had a piece of wood about three feet long and went inside the house. The man was on his bed and Tyson hit him on the head with the piece of wood.

"I was standing at the door," she said.

She noted three blows to the victim's head by Tyson. He took the man's pants and searched it and took the man's wallet. She did not see the man do anything. Tyson took milk, cream of wheat, corn beef and sardine as well as a diskman and put the things in his bag. He gave Narsha the bag to hold while she was outside in the yard, she said. He took six $20 notes from the wallet and threw the wallet in a hedge by the roadside. They went into the jeep using the man's keys to drive. She had never seen him drive before. And he smashed the jeep on the hill. They left separated and walked through the night. She got a ride in a green car to Sinekou, while Kenrick Tyson showed up the next morning at his grandmother's home with the bag, gun, milk, diskman. Daniel said she told Tyson she heard the man had died and he replied that she look like someone who would sell him out.

On Sunday May 17, they were watching cricket at Gullet River when the police showed up. Tyson ran away and the police took her into custody to the Marigot police station, and there she responded to the police's questions.

Sergeant Constance Cuffy was acting sergeant in May 2009 at Marigot when on Thursday May 28 received certain information. He mobilised a contingent of police officers from Calibishie, Wesley, Salybia and Marigot and proceeded to Kalinago Territory. They divided into two groups with Cuffy's group heading for the heights of Sinekou. At a certain place in the bushes they noticed a small shack in a clearing with three Kalinago men standing close to the shack. Cuffy noticed that one of the men was the accused. When they approached, the accused came towards them with a cutlass in his hand. Some of the men in his six-man team opened fire. The accused was struck in the leg. He was transported to the Marigot Hospital where Riviere the investigating officer met him Tyson was in pain and transported to the PMH.

Riviere met with Tyson on Alford Ward at the PMH on Sunday June 4. The accused said he was in a lot of pain and could not about all he was hearing people saying. The accused was discharged from PMH on Thursday June 29 and was arrested on suspicion. He was first taken to CID in Roseau and then to Marigot where he agreed to speak with the investigating officer. Kenrick Tyson told him it was Narsha who made those blows on the deceased.

"To tell you the plain truth is hold I hold down the man and she start making blows," he said.

And then he asked for his lawyer, Peter Alleyne.

Riviere also obtained a written statement which was witnessed by Reginald Nicholson of the Marigot sub-Treasury.

Tyson said he and his girlfriend left home.

"When they got a river we saw the same guy. I said he gave me a beating once. I am going to hit him back. So I hit him with a piece of 2 x 4. He fell. I fell on him and my girlfriend took the piece of wood and began to hit him with it. They we left," Tyson said.

Inspector Riviere also had a confrontation between the accused and his girlfriend during which they accused the other of dealing the killer blows.

Inspector Riviere on Friday June 30, 2009 charged Kenrick Tyson with the murder of Cecil James at Concord.

The case is expected to continue on Monday 27th April.