My Friend and Comrade 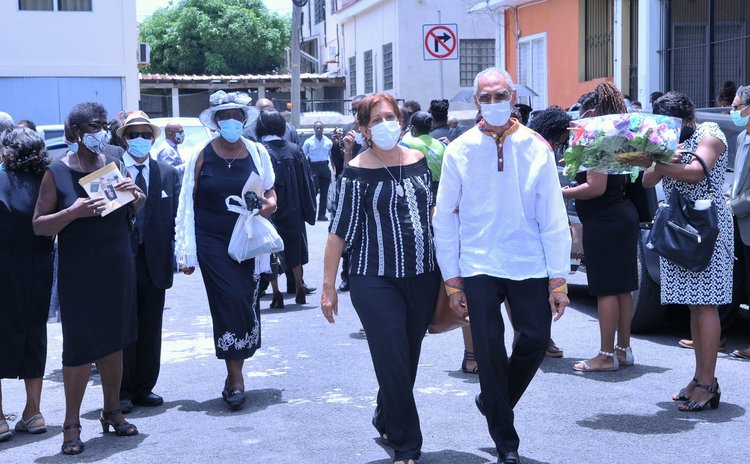 When the modern history of Dominica is written, Michael "Mikey" Bruney, actor, dramatist, broadcaster, lyricist, lawyer, and humanitarian, will certainly be identified as one of its giants.

By 1970, Trinidad and Tobago and Jamaica had already gained their independence The others were in the process of following. There was a general atmosphere of anticipation, joy and hope in all the islands, that the living conditions and lot of the population would be greatly improved with Independence. Unfortunately, this euphoria did not last very long and the events leading up to the first general strike by the civil servants in Dominica caused the islands to begin to lose faith. The amazing flow of events that followed the strike are well documented.

My story with Mikey begins in 1970 when I returned from UWI Cave Hill all fired up to work towards the establishment of an independent and culturally aware Dominica. I was appointed Head of the English Department at the Dominica Grammar School (DGS) where I taught English in Form 5, General Paper at SIFICOL and started the DGS Drama Club.

At DGS I met with Daniel Caudeiron , his wife Candia and a host of other clear-thinking young teachers who like me were looking forward to the prospects of Dominica becoming a Sovereign State/Independent Nation.

As most of us were artistes and writers, theatre was chosen as a point of departure of this great new adventure in which we explored areas most in need of social and political changes.

Mikey came onboard as a multi-talented visionary who was to make a tremendous impact on the lives of Dominicans in the field of arts and culture.

Mikey became the first The President of the Dominica Grammar School Drama Club, a vibrant group where plays such as Brother's Five, Good Morning Miss Millie, Strictly Matrimony and Malfini were performed. He later joined the People's Action Theatre (PAT) in 1972 just in time to be part of the production of Speak, Brother Speak a hard-hitting drama on Dominica's Social structure and politics, written by Daniel Caudeiron , and which was taken to the inaugural CARIFESTA in Guyana that August, where it attracted much attention with its Rastas, Reggae music and Babylon.

The preparatory work for social change had begun. But unfortunately had ground to a halt with the banning of Daniel Caudeiron known as DJ Papa D on DBS radio, and his transference from DGS to a desk job, thereby curtailing his SO called revolutionary ideas to the listening public, particularly the youth,

This resulted in the first ever Civil Service strike in Dominica led by the then leader of the CSA Charles Savarin, now His Excellency President of Dominica. The Union eventually won but by then Caudeiron had decided to leave Dominica and migrated to Canada.

But the "revolution" had started. My play Streak was the next move, which ran for 30 performances at St Gerard's Hall using a form of theatre patterned on the Calypso art form, called "Calypso Theatre".

Scores of young people applied for membership in PAT and a strong cadre became the life of the theatre, among which Mikey took a major role; as actor, and lighting and sound technician. Mikey was a born leader, highly creative, a ball of pure energy, with a great sense of humor, natural talent and a comfortable stage presence. He had that unique ability to make people laugh while understanding the serious business of national development which was at the forefront of the groups' agenda.

He also showed great potential as a storyteller which served him well as a broadcaster, stage director, stage manager and technical director Mikey was a reliable support to me throughout this process.

Mikey's roles included Copain Lapain in Pio Pio, an extravagant musical which served as a centerpiece for the Independence celebrations in 1978: Technical Director on plays including Ti Jean and his Brothers and Dream on Monkey Mountain; and Crab Soup" in The Ruler. To this day many persons still refer to him as "Crab Soup".

In 1976 he directed his first play, The Nitebox, starring Benjie Shillingford and Carol Severin, which was a smashing success.

He was one of the main writers of the radio serials Green Gold, Winds of Change and Secrets of La Cloch which aired on DBS radio in the 1980's. A perfectionist to the bone, nothing was too much for Mikey to do to ensure that the final product was of the highest possible standard.

He wrote the Lyrics of several calypsos for "King Shakey" and "Rabbit" some of which were road march winners including Debas pour Debas, Run Solomon, You Follow and Wang Fan Chu.

Although he did not overtly participate in partisan politics, he understood the need for fairness and impartiality in reporting the news and ensuring that what he reported was always the truth.

He had a wry sense of humour and the unique gift of making people laugh, even at themselves. So, we laughed together and sometimes cried together to see our country SO divided.

Mikey, I will always remember you and will strive to continue achieving the high standards of theatrical production that we reached in the late 70's and 80's.

Farewell my friend and Comrade.