My time and experiences with Var 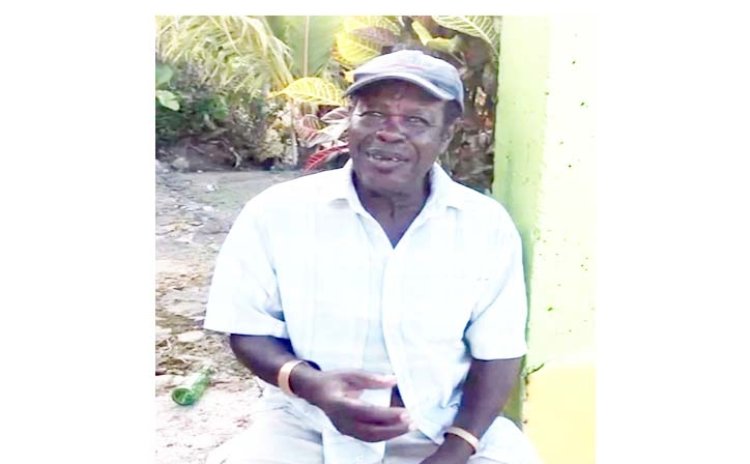 On Monday, February 22nd, 81-year-old Oliver Emanuel died at the China-Friendship hospital after a long illness. Var as we affectionally called him, hailed from Riviere Cyrique, and relocated to La Plaine in 1968 after he got married to my aunt. In the mid-90s he left La Plaine and retreated to his house on the hillside hamlet of Frayal which overlooks the scenic Rosalie Bay.

Var was the hardest working banana farmer I have known. He was an independent thinker, but diplomacy and quiet negotiations were certainly not his strengths. He respected hard workers, abhorred laziness, and detested thieves, and vagabonds. I credit him with teaching and showing me how to work hard and to have laser focus discipline.

Dr. Blanchard established a dairy farm on the flat land and planted other crops. When he abruptly and permanently left for the U.K and the land was without an owner. Residents from the surrounding communities of Grand Fond and Riviere Cyrique grabbed portions of land and started small farms.

While in High school I spent many of my vacations working with Var on the banana farm at Aux Delice. I have memories of the back-breaking work, which included planting and cutting the banana fruit, carrying them to the roadside, and delicately loading the truck (to the brim). Var would drive the winding 2.5 miles very slowly to the Rosalie boxing plant in the middle of the night. At that time, banana was king and the lifeline of the countryside.

Because of the proliferation of the industry, the economy of rural Dominica was booming. 'Money was meeting money'. There were new pick-up trucks owned by Banana farmers. Rosalie boxing plant (now the site of the Rosalie hotel) was a hub of sustained economic activity. Ladies were selling bakes, beverages, and other things all day and deep into the night.

Many women also worked at the plant washing and boxing the delicate fruit after they were purchased for shipment. With banana money, these rural women were more empowered, and families could afford high school in Roseau thus breaking the cycle of poverty.

That is where I first met a guy who was a student at the St. Mary's Academy. In addition to helping his family to cultivate and sell the bananas at the boxing plant, he also worked upstairs stapling banana boxes. This Grand Fond man has gone on to be one of Dominica's best and brightest shining stars. Today the former IMF economist, Dr. Thomson Fontaine is half a world away in war-torn South Sudan helping the world's newest nation with its economic state-building activities, laws, and policies.

In 1998, Trinidadian calypsonian David Rudder's big hit: 'The Banana Death song' confirmed the reality that the industry was on life support. Market forces, tariffs, trade barriers, geo-politics, actions of the World Trade Organization (WTO), and a 'comparative advantage' in the efficient production of the crop in Latin America and local factors heavily contributed to the demise of the Dominica banana industry.

The industry ailing caused a mass exodus of farmers to abandon farming. Var was no exception, bailed out and sold the farm. He became a bus driver transporting tourists, passengers, and political campaign supporters to rallies and meetings.

The last time I saw him was three weeks after Hurricane Maria when I was one of his passengers to La Plaine from Roseau. He assured me that we would make it to our destination traversing the dangerous roads which were destroyed by the angry winds and vicious rains of Maria.

As the small bus negotiated the potholes, broken roads, hairpin turns of the knife-edge ridges, and deep valleys on our way to Au Vent (southeast region), we reminisced about our days back in the 70s. I was glad I got the opportunity to tell him that he was a big influence and inspiration in my life.

He became emotional and I saw some tears running down his cheeks. He spoke lovingly about his first daughter, Olive, a nurse in South New Jersey. I had never seen or know this man ever expressed an ounce of emotion, weakness, and/or vulnerability.

Var is survived by seven children, 13 grand and two great-grandchildren. Despite dealing with the death of her 28-year-old son, Kishon, who died in a vehicle accident on a South Jersey highway in November, Olive arrived in Dominica in early February. She has spent the entire month at the hospital traveling daily from La Plaine to ensure that her dad's business is in order and his transition was with dignity and minimal discomfort.

Goodbye Var and may your soul find contentment and eternal rest with the Heavenly Father and the angels. Thank you very much- indeed- for your guidance.