Nathaniel Lovell: Dominica Can Be a Main Honey Exporter 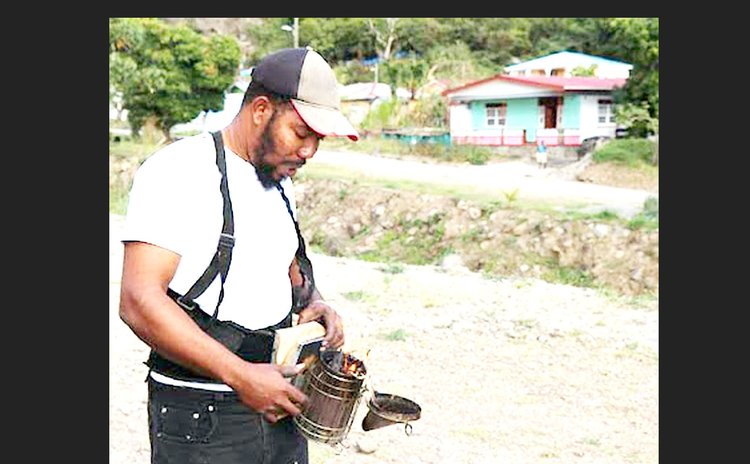 A young man in Coulibistrie is positioning himself to bolster Dominica's honey-producing industry by steadfastly pursuing his vision of growing his product to reach the international market.

Nathaniel Lovell initially entered the bee-keeping business with a friend, purely as a hobby. At that time, he was what is called a hobbyist beekeeper. However, as life would have it, this hobby would turn into a passion that would lead to his career.

"It was a matter of me having almost no other way out," he told The Sun, "I was previously employed with IOM and Secret Bay prior and just getting into the idea of me not really wanting to go and work a nine-to-five and kind of carve out my life my way."

Lovell was an amateur beekeeper for eight years before making the life-altering decision to go commercial with honey production three years ago.

He formed the company Bee Api and there has been no turning back since although he has encountered challenges in the beginning phases.

"The thing with beekeeping in Dominica, there is no literature on it, or there is no manual," he said. "So figuring out our season, the flowers that the bees use to make the honey crop, stuff like that is not readily available."

This honey-producing enthusiast currently has 60 colonies to his name, which is considered a large-scale apiarist since the average beekeeper has two to five colonies.

He has no intention of remaining at 60 colonies as he rightly termed his venture a growing business, and not a small business.

"The aim is to reach somewhere around the area of two hundred and fifty to three hundred colonies. The way that I am planning on doing that is by doubling my amount every year."

The current number of colonies allowed Lovell to produce an impressive volume of honey which all sold out by December 2021.

"With the sixty colonies, last year I produced a hundred gallons of honey and basically it all sold just by people knowing I have honey around my village."

This devoted beekeeper is resolute that Dominica can supply overseas markets with its honey as there is a larger demand than supply for the product.

"What I am trying to do is to get Dominica to be like a main exporter of honey. That simply means we first have to take care of the local market and ensure that enough honey is circulating in Dominica and then we can supply the foreign markets," Lovell said.

If all goes according to plan, Lovell will start distributing overseas by mid to late 2023.

"So by next year, I should have enough honey to help sustain the local market and be able to export," he said.

He does have a few things to put in place before this becomes a reality.

"I'm actually working with NDFD, they've been a huge support to me, they actually made my labels and sent it to the Dominica Bureau of Standards (DBoS) for review so we can get feedback so I can get my barcode and they could let me know if it meets the standards for labeling and so on," he said.

Other future plans for Bee Api include purchasing a piece of land to put a building, specifically for honey extracting or producing, like a small factory. This honey house would enable the company to meet health standards, DBoS standards and be able to deliver a quality product.

Employing someone to assist is also on the cards and Lovell is grateful to is brother, Elvis, who was an immense help in the early stages of Bee Api.

To anyone looking to take up apiculture, Lovell says: "It's a very lucrative project, it takes a lot, but if you are really interested in doing something where you will learn every day and you never stop growing it is definitely something to look at."