Patrick John is flown to Martinique for medical treatment 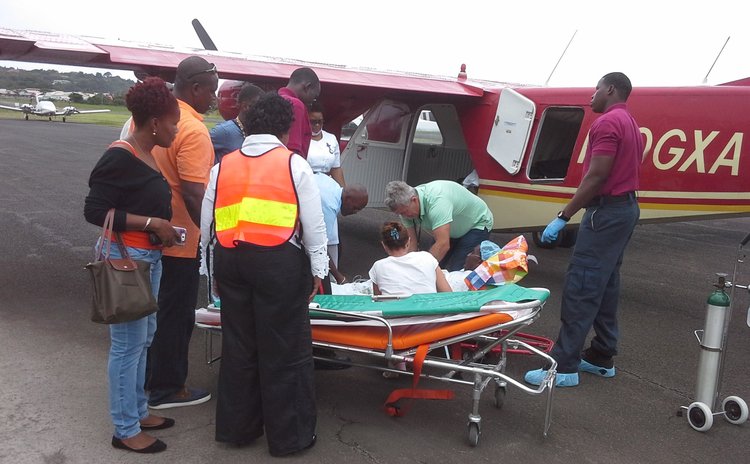 Patrick John is being taken by air ambulance to Martinique

If PJ is the "Father of the Nation" his sons and daughters gave him a huge helping hand last week when he was flown by air ambulance to a Martinique hospital to receive treatment for a heart problem.

Strapped to a wheel stretcher and with medical tubes hanging from his nose, as he was wheeled to the aircraft at the Canefield airport on Thursday morning, Patrick "PJ" John paused to say thanks. He meant it.

Some Dominicans refer to PJ as "the Father of the Nation" because he led Dominica to political independence from Britain on 3rd November 1978.

On January 7, 2016 Patrick Roland John was flown to La Meynard Hospital in Martinique for urgent medical treatment for his heart. John was 79 years old on January 8th January 2015.

While in church on November 29, 2015 John, complaining of shortness of breath; he was taken to the Princess Margaret Hospital (PMH) and he was kept there until December 30, 2015 when he was discharged.

However, four days later, on January 3, 2016 Desiree, his wife, took him back to the PMH after he complained of feeling unwell.

He was readmitted and was later transferred to the Intensive Care Unit (ICU) to stabilize the functions of his heart.

Subsequently, many Dominicans questioned why the Government of Dominica was not readily assisting the former Prime Minister. That prompted Q95FM to organize a radio pledge on PJ's behalf on January 4, 2016.

That radio pledge collected about EC$40,000. Later, the Government of Dominica through Prime Minister Roosevelt Skerrit said it would "handle all the medical expenses, be it half a million or a million for the former Prime Minister." John is also a former President of the Dominica Football Association (DFA), and a founding member of the Waterfront & Allied Workers Union (WAWU).

In October 1985 John was found guilty of attempting to overthrown the Dame Eugenia Charles government. He was jailed for 12 years but served five; he was released from prison on 29th May 1990.