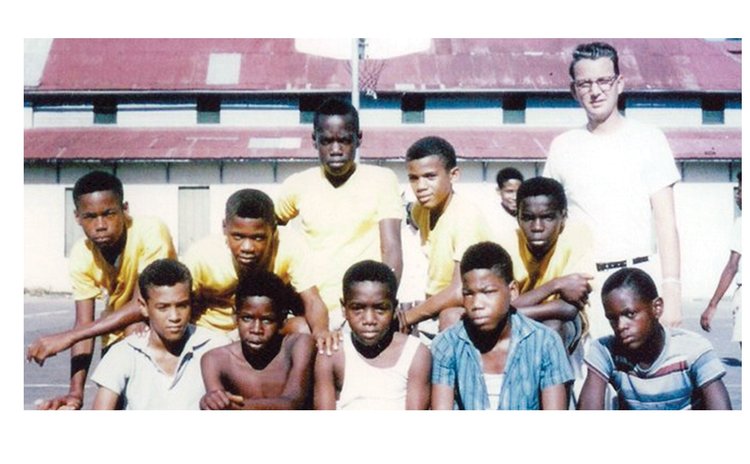 It is customary to play recreational basketball games without a coach. However, when it comes to the real thing, i.e. during training and 'official' matches, someone has to take up the responsibility of coach and can even be ejected from a game after having incurred two or three 'Bench' Fouls. He may sometimes be a player on the team or, as in most cases, he would be on the sideline – mostly within the coach's box - "running t'ings" as we say here in Dominica.

Teams at all levels in Dominica's national basketball league have had coaches. From Under-16 teams to Women's teams, and from Junior Division teams to teams in the 'big league', i.e. the senior division. Of course, teams that represent Dominica, either at the senior or junior national level, club or even school level have all had their coaches and in many instances, an assistant coach as well.

Very often we hear comments coming from the spectator stands or even from a losing team's substitutes' bench to the effect that wrong subs, or bad timing of key substitutions were responsible for the demise of the particular team.

Well-known Dominican sports-caster and columnist Reginald St. Havis Shillingford in his Sports Commentary entitled 'Easter Cavalcade of OECS Sports' had noted, "The point about basketball is the tremendous extent to which games can be won or lost from the bench. The right subtractions [substitutions?], the right tactics (or the opposite) can make or mar a result in seconds. That's where the coach takes on a uniquely vital significance. His business being to know opponents in advance as far as possible." (The New Chronicle, 17th April 1987).

More recently BetterTeam.com also noted, "The responsibilities of a Basketball Coach include creating strategies for the team, instructing the players, and providing mentorship. To be successful as a Basketball Coach, you should have solid knowledge of basketball and its rules, be able to develop winning strategies, and have good communication skills."

Dominica's national basketball league tipped off in 1966 and our first Island Team – then referred to as the Dominica State Team - undertook its first tour of duty the following year. Dominica had attained Statehood from Great Britain in 1967, hence the reason for the team being referred to as a State Team then.

Between 1967 and 2012 Dominica's Senior National Basketball Team came under the direction of no less than nine (9) coaches, some for only one year, others for longer periods, and even in more than one stint.

The men with the clipboard directing the national team have been quite diverse. One was a non-national. All but one of the Dominicans had played on Dominica's State or National Team. Another held the reins of coach while simultaneously captaining the team. Furthermore, we also saw the national team coming under the stewardship of three coaches in three successive years during the 1990s.

Let us now meet the men who over the years had been charged with the responsibility of coaching Dominica's national basketball teams, over a period extending from 1967 through 2016.

Bro. William A. Stevens was the first person to be appointed head coach of Dominica's State Basketball Team. He was one of the Christian Brothers and taught Mathematics at the St. Mary's Academy (SMA) – the birth place of Dominica's national basketball league.

Although the island's inaugural basketball league bounced off in 1966, the first 'national' basketball team was selected in 1967. That year Coach Bro. Stevens 'ran things' for the State Team's engagement of the Guadeloupe Island Team, followed by Barbados' League Champions – 7 Up Giants; both sets of matches were played at the SMA court in Roseau.

In the Jump Ball article, 'Basketball Before Windsor Park: 1966-1971' published in The Sun newspaper it was noted, "1968 was a relatively busy year for Dominica's Island Team, playing 10 games in local and overseas engagements against teams from Guadeloupe, Trinidad, St. Lucia and Barbados."

That year Dominica played against four other teams during a Barbados tour, but the coach was unable to complete that tour. According to the Dominica Chronicle of 3rd July 1968, "The fact that the coach Brother Stevens had to quit the tour through sickness did not dampen the team's spirit in the least." Unfortunately the team emerged winless from that tour.

The State Team undertook a very successful tour to St. Kitts in May 1969 and in August/September that year hosted an American intercollegiate team named Alamolo, comprising players from Alabama, Mississippi and Florida. Bro. Stevens wound down his stint as Coach of the State Team with those two sets of games in 1969. Continues next issue