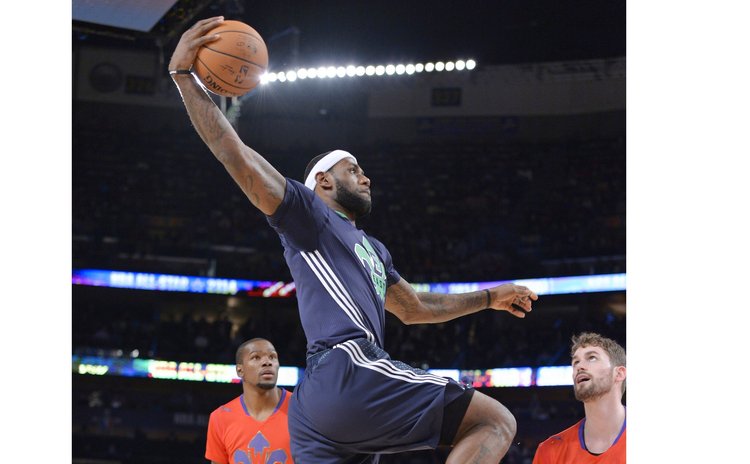 The two sides combined 318 points to make the game the highest-scoring game in NBA history.

The 21-year-old Cleveland Cavaliers point guard Kyrie Irving won the MVP reward with 31 points and 14 assists. Carmelo Anthony made eight out of his 13 three-point shots to score a team-second 30 points. LeBron James and Paul George had 22 and 18 points respectively.

Kevin Durant and Blake Griffin had 38 points each for the West. Stephen Curry made 12 points and 11 assists. Chris Paul finished with 11 points and 13 assists.

The East started the game 11-4 thanks to a couple of fast break chances, but the West rallied back after Stephen Curry and Chris Paul helping Blake Griffin dunk and dunk again in the later half of the period. The first quarter ended with the West leading 44-44.

The two sides tied 56-56 into the second quarter, before the West dashed off with a 13-2 run to establish a double-digit lead. The league-leading scorer Kevin Durant made as many as 22 points in the first half, helping the Conference take a 89-76 advantage at the end of the first half.

The 89 points was set the All-Star record of most points in a half, and 165 combined points also refreshed the league history record.

The East managed to come back in the second half, cutting the gap to three points at the end of the third quarter. Irving dominated the final quarter, scoring 15 to keep the team competitive. Anthony hit a three-pointer with less than two minutes left in the fourth quarter to extend the advantage to four points, but the West failed to respond. The East finally won the game after a 13-5 spurt.

"It was just special," said Irving after the game.

"Just being out here with all these great athletes and playing in front of a great crowd in New Orleans, and then the game got competitive."