NBD says it's sponsorship is real for Mas Domnik 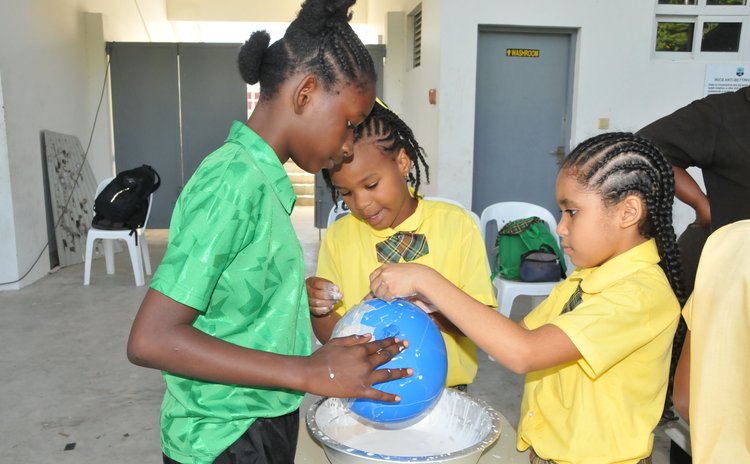 Children work on art at the NBD workshop

Several schools have participated in a Costume Building Workshop from the members of the Costume Builders Mas Camp and sponsored by the National Bank (NBD) of Dominica. The workshop was held at the Windsor Park Sports Stadium on January 26.

Darnley Guye, head of Costume Builders Mas Camp said thanks to the NBD.

"We are grateful to have these young people taking part in this workshop, it's something we always look forward to. We want to see the tradition of costume building go further, we want to know that when those of us have to go there is somebody behind to take over," said Guye.

Meanwhile, Suzanne Piper, NBD's Marketing Manager said that through the bank's sponsorship the schools will be able to put out a band or float on the Monday Street Parade.

"NBD has supported this aspect of carnival for several years now and this year is no exception," said Piper.

She added that the bank is especially proud of sponsoring the Youth Mas this year because despite the challenges the schools faced for the first term of the school year they are making an extra effort to come out and be part of the carnival celebrations.

"We feel that it is important for all of us to work together to ensure that signature events like Carnival will continue to be staged at a high level. Why? Because it is culture and it is our responsibility but also it is a stem of economic activity from which all of us benefit," she said. "This year in addition of sponsoring the youth mas we have participated in the opening parade for carnival with our advertising float, we sponsored the NBD Flag wavers, Teenage Pageant, Princess Show, Junior Monarch and Village Carnivals."