NCCU to Scholarship awardees: "Make us all proud" 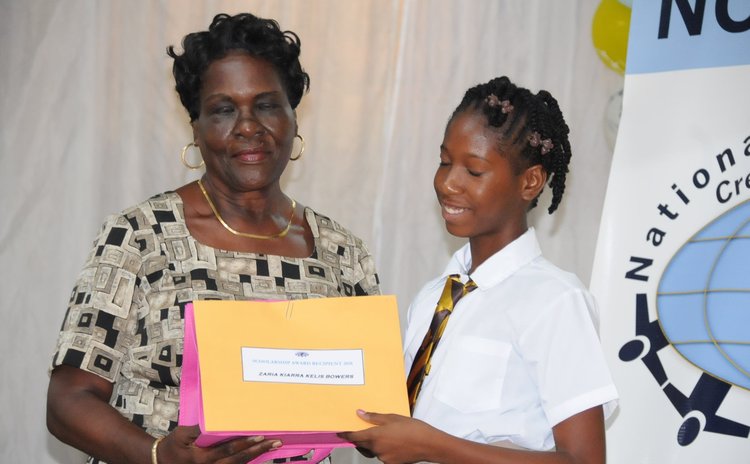 Scholarship award ceremonies have become commonplace as the opening of the school year looms. They are usually staid, predictable affairs-directors of the awarding institution give speeches, students are presented with awards, then the students and their parents are ushered to the podium to say thank you.

But at the National Cooperative Credit Union (NCCU) ceremony last week one student, Nyel Evanique Groove, who received one of two Hudson Savarin scholarships, deviated from the script and sang in a loud, confident voice.

Before that unusual element, Curth Charles, the acting NCCU Chief Executive Officer told the students and their parents at a ceremony held at the Conference room of the Dominica Public Service Union (DPSU) that students must work hard and concentrate on their school work.

Then NCCU president, Josephine Dublin, before handing over the awards said that the NCCU, one of Dominica's leading financial institutions, has been awarding scholarships to Dominica's best and most needy students for more than 50 years.

The scholarships, she said, were established in the name of credit unions notable volunteers to honour their "sterling contributions" to the credit union movement.

"During the past eight years we have introduced seven scholarships," Mrs. Dublin said.

Mrs. Dublin said there are currently 66 students on NCCU scholarships at Dominica's secondary schools and in 2017 the institution spent EC$70,000 on the programme.

" The annual schools scholarships is our society's way of investing in the human resource potential of our communities, our country while at the same time expressing gratitude to our valued membership," said Dublin.

Here is a list of the NCCU scholarships and their receipients.