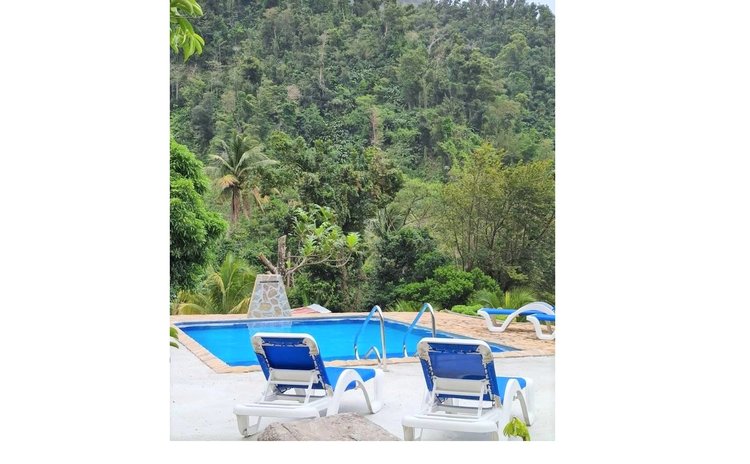 Part of the Pinard Resort at Pointe Michel

"Are you fed up with wave after wave of lockdown, continual uncertainty, and staring at the same four walls every day?" asked Dominica on its Work in Nature website which contains a video of carnival, dancing, food and lots of idyllic nature scenes. "We get you. That's why we have created a Work in Nature (WIN) Extended Stay Visa – so that you and your family can come to the Nature Island of the Caribbean and live and work here for a while instead."

It's an enticing appeal to the growing number of people who have chosen to become digital nomads - remote workers who travel the world.

The COVID-19 pandemic has left Dominica's tourism on a ventilator and gasping for breath, with only 6,652 tourists visiting the country between January and July this year – the latest for which statistics are available – down 64.2 per cent when compared to the previous year. It's a long way from the 200,000 visitors a year which the ministry of tourism has targeted by 2025.

Therefore, in a bid to breathe new life into the industry, the government has followed the lead of several Caribbean destinations that are looking to benefit from the rising interest in remote work by offering long-stay work visas.

"Although fairly new, the programme has added an attractive component to our already diverse tourism product. It has caught the attention of new emerging target groups, including remote workers, digital nomads and retirees to name a few, throughout the region and the world," Colin Piper, the country's director of tourism, told The Sun. "As a result, we highly anticipate that this innovative programme will lead to an increase in visitor arrivals contributing to the ministry of tourism's overall goal of 200,000 visitors by the year 2025 and boost economic activity within the country."

According to MBO Partners, a business management software company in Virginia, USA, which specialises in digital nomadism, the number of digital nomads in the United States alone reached 15.5 million this year, an exponential 112 per cent rise when compared to the 7.3 million in 2019 and 42 per cent higher than the 10.9 million in 2020.

"Nomads seek locations that offer new experiences, as well as those conducive and suitable to living and working for extended periods of time. Caribbean nations, with their easy access from the United States, relatively low cost of living, and attractive climate and scenery are all uniquely positioned to capitalise on this trend," McLean Robbins, the vice president of enterprise marketing at MBO Partners, told The Sun.

It's attributes such as the scenery and attractive climate that Dominica hopes will attract its fair share of digital nomads, and it's what attracted Alquena Reid, a doctoral student from Harlem, New York, to Pinard's Mountain Resort, a sprawling 15-acre property with four cottages – a fifth is being constructed – on Leonie Estate, Pointe Michel.

"What I enjoy, especially coming from New York City, is the nature, or course, the birds singing in the morning, the greenery, the mountain and the sea view, which for me is a million-dollar view, the vibes and the energy," said Reid in a promotional video for the resort. "It's just peaceful and tranquil."

Outside of workers from the Barbadian company Preconco, who spent about two-and-a-half years there, along with Reid and an African medical student who spent two months, Pinard's Mountain Resort's business of late has been mainly from locals holding pool parties. The property is currently on the way to being certified for the WIN programme, after which it hopes remote workers will flock to it.

"For us it would definitely generate a steady income," Remy Mills, the general manager, told The Sun. "It would really boost our income and it would give us a steady cash flow."

Barbados was the first Caribbean tourism destination to open its borders to remote workers and digital nomads in August 2020 with the launch of a 12-month Welcome Stamp visa programme.

Since then, Anguilla, Antigua and Barbuda, Aruba, the Bahamas, the Cayman Islands, Curacao, Dominica, the Dominican Republic, Montserrat, Puerto Rico and Grenada have all launched similar programmes. Most of these visas come with substantial fees and proof of income or a healthy bank account. Those applying for Dominica's 18-month visa must pay a non-refundable fee of US$100, and a visa fee of US$800 for a single applicant and US$1,200 for a family.

The economic impact of these remote work programmes is not yet known, but Aruba has reported that about 13,700 visitors have arrived there for "workations" since the extended-stay programme was launched last September. Bermuda said it has received about 1,000 applications for its Work from Bermuda certificate since last August, and Barbados said its Welcome Stamp visa has attracted almost 5,000 new visitors since last June.

Dominica, on the other hand, has received just 19 Work in Nature applications since the programme was launched earlier this year, six of which have been approved, with the government encouraging a three-month stay instead of the 18 months, "as a means to test the waters," Piper explained.

Of the 6,240 digital nomads surveyed by MBO Partners in July 2021, 19 per cent work in IT, and 77 per cent reported that they use technology to make themselves more competitive in their work, making high quality and reliable internet connectivity critical to remote work. In fact, a minimum speed of 100 Mbps is needed for effective remote work, asserts Boston Consulting Group, one of the world's most prestigious management consulting firms, based in Boston, Massachusetts.

Yet, of the 181 countries listed on the Speedtest global index for October 2021, Dominica is ranked 103rd with an average download speed of 36.93 Mbps.

It's a question of affordability, said Craig Nesty, executive director of the National Telecommunications Regulatory Commission, who explained that when all economic factors are considered, EC$50 is what the population would consider affordable for internet. But the cheapest package before taxes and other fees are added is $95 for a top download speed of 15 Mbps. And although the fibre optic cables allow for greater capacity, the highest download speed offered by Flow is 50 Mbps – half of the 100 Mbps recommended – at $185 a month, before taxes and other fees are added.

"There's a lot of capacity," Nesty told The Sun, "it's just that I don't think Dominicans have the propensity to want to spend more than they need to on telecommunications services and I think the distribution would lead towards more people subscribing to the cheaper package, which is 15 megabits per second."