Nehi touched the lives of everyone he came across 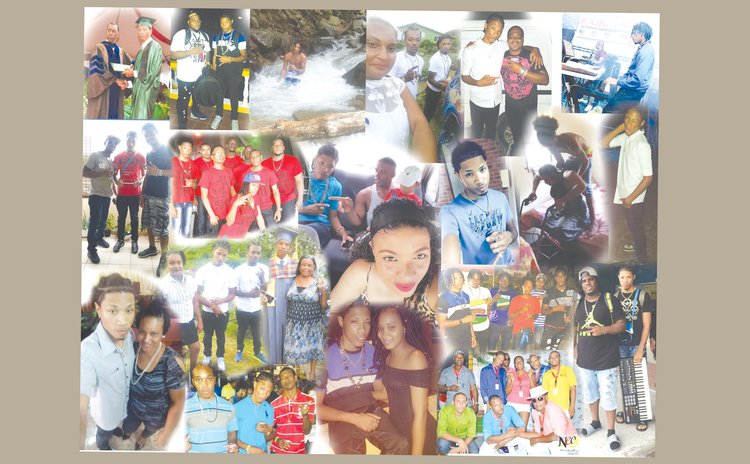 Nehi: His Life and Times, from his funeral programme

Nehimiah Darroux, affectionately known as Nehi, Asson, Polo, Coo-coo and Neh-neh was born on the 16th of June, 1996 to Raphael and Augustina Darroux both of Petite Savanne. He was the fourth of six children; Melvin, Christalin, Melina, Miriam and Neron.

In his early childhood, he enjoyed playing cricket on the roadside, river bathing, climbing trees and taking the long walk to the seaside at Petite Savanne to bathe in the sea. He also enjoyed playing video games with his childhood friends like Garvin, AJ, Reds, Wayne, Wendel, Dervon, Judah, Japheth, Dane and Rundel. He was raised as a Christian, being a member of Church of God Seventh Day. He was multi-talented. He could play almost every instrument he came across: trumpet, keyboard, bass and rhythm guitar, and drums. Nehi could also draw very well. Because of his love for music he learned to play the keyboard at a very young age. At home with his family, he would play the keyboard while his siblings sang along. At the tender age of seven years old, Nehi was already playing the keyboard in church along with his older brother Melvin, his uncle Patrick and other members of the church.

Nehimiah attended the Petite Savanne Pre-school operated by his aunt Miss Bertha. From there he went on to the Petite Savanne Primary School. Up to this present time his teachers can remember a composition he wrote in primary school: 'Why I love going to school'.His main reason for going to school was because he will not have to do chores and go to the shop if he's at school. He boasted up till the day he died that his favourite primary school teachers were Miss Yvette and Teacher Baba. After primary school, Nehi attended the Pierre Charles Secondary School. He had fond memories at secondary school where he was a member of the school band. He then moved on the Dominica State College where he attained an Associate Degree in Electronics. After College he started his first job at DOMLEC for a few months and then moved on to Telecom Life. In 2016 he worked at the Radiology Department at the Princess Margret Hospital.

The events of August 27th 2015 were life-changing for Nehimiah. On this dreadful day he lost five members of his immediate family including his parents, two sisters and one brother. He also lost extended family members to include aunts, uncles, cousins and his close friend Darvin. He was fortunate that at the time of Tropical Storm Erika he was not at his father's home in Petite Savanne. After his great loss and the evacuation of Petite Savanne, he was relocated to Leopoldville. Despite renting with his friend Reds, he decided to go to the Dominica Grammar School where he met with Del and that bond grew from friendship to brotherhood. After the Grammar School he was again relocated to St Aime's Guesthouse. At St. Aimes Guesthouse the bond didn't stay between him and Del instead it extended to the entire family. From there he moved in permanently with Miss Yvette and her family where he resided for the last three years of his life. Like everyone else, the family recalls many memorable times with Nehi. Some of these memories include: often reading to the children, working on school projects, playing the keyboard while the family sang and danced, imitating practically everyone he came across, making the most delicious bakes and cooking what he called his National Dish- chicken, lentils and dumplings. He was a very good impersonator and his favourite people to impersonate were his grandmother Helena and his grandfather Benoit or Mr. Lapow, as we all know him.

Most people, if not everyone remembers him playing his keyboard on a stage with a band: Dominica or overseas. Playing the keyboard was his passion. Nehi played for many bands such as Extasy, WCK, Asa Banton, Breve, All Stars, Guada Benz among others. He played backup keyboard for many artistes including New Generation Bouyon Artists – Keks Mafia, Reo, Kenny G, DJ MJ, Stasha to name a few. He enjoyed spending time in Willy's Barbar Shop with Shanon and the other boys. He spent a lot of time in Odel's garage with GMG BOYS.

Nehi touched the lives of everyone he came across. He was serious about life. He wanted to one day get married and have a family like his parents did. In so doing, when he asked Shania John to be his girlfriend, he requested that they keep God in their relationship. He can be described as a humble, trustworthy, caring, loving, gentle, warm, talented, funny, intellectual, diligent, easy going and down to earth individual.

In the absence of Nehi, life will never be the same again. However, there are many fond memories to us going. He will surely be missed by all.

May he rest in eternal peace.