New Electoral Commission has been appointed 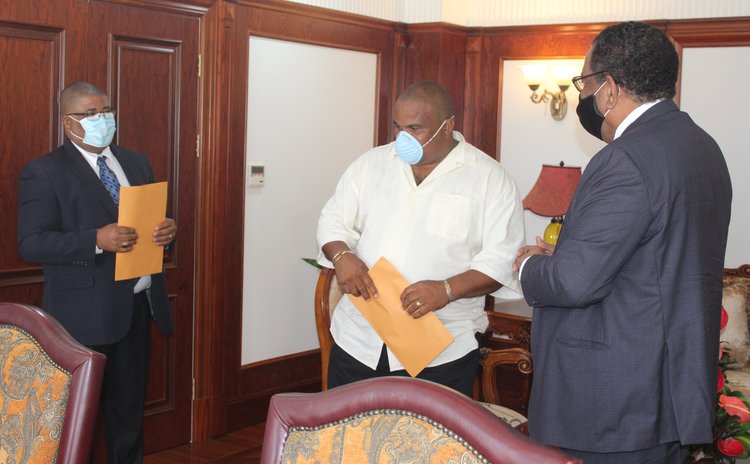 Left to right: James, Shillingford and President Savarin at the swearing in of members of the Electoral Commission

A new Electoral Commission is being appointed. The Opposition United Workers Party (UWP) has made no changes to its two nominations on the Commission.

Commissioners Hilary Shillingford and Wayne James are back as the appointed nominees of the Leader of the Opposition.

James and Shillingford were commissioners for five years before the December 2019 general elections. Along with Gerald Burton as chairman, government nominees were Kondwani Williams and Alick Lawrence SC.

Williams has declined an offer to again sit on the Commission and has been replaced by Lennox Lawrence who, like Shillingford and James, has taken his oath and received his instrument of appointment.

But the burning question is who will be appointed chairman. Speculation continues that Gerald Burton has decided to take up the mantle of chairman.

"He had said that he was done but from what I have been told he has decided to be back and take the chairmanship post again," a well-placed source within the commission said. The chairman of the Commission is appointed by the President of Dominica acting on his own deliberate judgment.

Efforts at reaching Burton by telephone for comment and confirmation were unsuccessful.

"We have been informed that two of the commissioners will be Lawrence and Lawrence, which is Alick and Lennox Lawrence," Shillingford said. "We are now well on our ready to champion the cause on the Electoral Commission to have free and fair elections in Dominica.

"Our focus…as anything I can tell you that we have gone along and voted and everything is in place and it now a matter for the government to finance the operations and get people trained. It should be quite easy for the Commission."

He said it was a difficult decision to return to the Commission but he was persuaded by Wayne James.

"I had already decided not to continue but Wayne (James) is a committed person. He takes the country like his business and he felt that we had to continue and also people meet you on the road and ask you to serve.

"I have the greatest of respect for the Leader of the Opposition and when he asked me to serve I discussed it with my family before coming to a finally decision. But let it be known that me deciding to accept to serve again was greatly influenced by Wayne James," Shillingford said.

For Wayne James it is time for action and implementation.

"We had our difficult moments on the Commission but as I have always publicly stated having Hilary with me is great. We have disagreed on some issues but he is independent like me. We have the love for the country in common…we have time and the financial resources so now all we have to do is implement the work that was started," he said.

Editor's note: Mr. Burton has informed the Sun that our statement that "he has decided to be back" as chairman of the commission is erroneous.