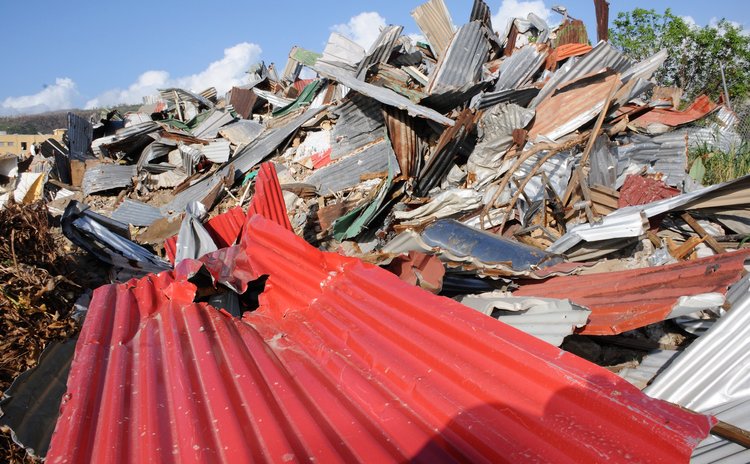 Galvanize in a heap at the Pottersville Savanah

Florian Mitchel, the General Manager of the Dominica Solid Waste Management Corporation (DSWMC) says he is committed to removing all damaged galvanize zinc out of Dominica before the 2018 hurricane season begins.

Just after Hurricane Maria devastated Dominica on 18 September 2018, galvanize zinc was heaped up in fields all over the island; there were plans to export the material.

"The best process in dealing with that material is to compact it using a metal compactor and subsequently export the material to the current market", said Mitchel. "As I speak to you, the information that I have as it relates to this issue, is that the Government of Dominica is looking at a few proposals…we have gotten proposals locally, regionally and internationally. I know that the government is presently reviewing the proposals that were submitted so as soon as a decision is made that will be revealed."

He continued: "I know that the public is of the opinion that we are approaching another hurricane season and that the materials need to be processed. That is also our concern as we; that is why we are working tirelessly to ensure that the process is expedited and the most suitable candidate is awarded the contract and it will be exported out of the Nature Isle."

Mitchel said he has spoken to the Minister of Environment, Joseph Isaac, who is also dealing with the cost factor and he has to discuss the matter with the Minister of Finance, Prime Minister Roosevelt Skerrit.

"A cost factor is also involved and that is also key and very important. So you would understand that even when the person is selected for the contract, the cost issue must come to play and the Minister of Finance has to also be involved," he said.

Mitchel said that materials are stored in Salisbury and will soon be removing them to the Roseau Land Fill.

"We have removed those in Pointe Michel and will be removing Portsmouth. We are committed to removing the materials before the upcoming hurricane season...we also have in La Plaine and all that has to be dealt with," he said.

But Michel shied away from providing an estimate of the cost and the main contenders for the award of the contract.

"We have offers from St. Vincent, Guadeloupe, United States and also locally, so all that is also being reviewed. I am not at liberty to give details of the cost also. The price was, however, ranging from 15 to 20 thousand dollars depending on the scope of work," he said.

Minister of the Environment Joseph Isaac disclosed that Cabinet had taken a decision to have the galvanize zinc exported but he did not give further details.