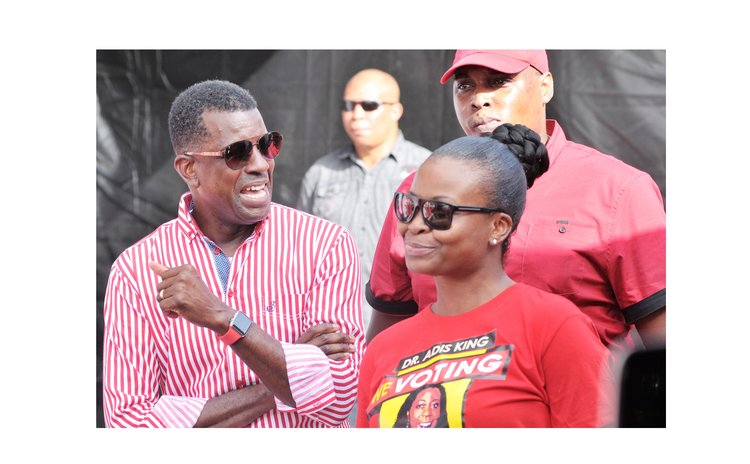 Dr Henderson with DLP supporters in 2019

As Dr. Vince Henderson officially became the parliamentary representative for Grand Bay by taking the oath during the House of Assembly meeting on Monday 29 November, there is a real and present danger of a legal challenge of the by-election that he won on Thursday last week.

Despite its refusal to partake in the Grand Bay by-election, Dominica's parliamentary opposition party, the United Workers Party (UWP), but in a change of strategy, the party's leader, Lennox Linton states that the Courts must be petitioned to declare the participation of Dr. Vince Henderson in the election "unlawful, invalid, null and void."

Henderson, who will serve as the parliamentary representative for the constituency, is the first non-Grandbarian to serve in that capacity in 60 years. Notwithstanding, his victory, Henderson's nomination was met with great opposition: there were mounting calls for him to be barred from the by-election as opposers said he was in breach of the qualifying criteria for contesting an election for membership in the House of Assembly.

As of nomination day, November 9, many claimed that the DLP stalwart had not been recalled, nor had he resigned from his position as Ambassador of the Commonwealth of Dominica to the United States of America (USA) and the Organization of American States (OAS), positions which he has held since 2016.

In the days ahead of the by-election, several letters to the Chairman of the Electoral Commission, Duncan Stowe, seeking intervention in the matter went unanswered.

However, on the eve of voting day, (November 24), Stowe informed Linton that his letter was brought before a meeting of the Commission on November 15, 2021, where the matter "was discussed extensively, but it was not decided to accede to your request."

The Chairman also responded to a letter by four "concerned citizens" who on November 22, 2021, appealed to Stowe to use his authority to launch an investigation of all candidates in the Grand Bay by-election.

Dr. Irving Pascal, Judith Pestaina, Atherton Martin, and Loftus Durand, in their joint letter to Stowe, expressed concerns over what appeared to be a violation of some of the laws and regulations as it pertains to the proper registration of candidates for participation in the by-election.

Their plea for a response to their letter from the Chairman via email no later than 12.00 noon on November 23, in light of the established date of the election, went unheeded.

However, 24 hours past their given deadline, Stowe informed the "concerned citizens" that pursuant to the House of Assembly (Elections) Act, Chapter 2:01, Laws of the Commonwealth of Dominica, "all three candidates in the Grand Bay bye-election were validly nominated."

The Electoral Commission Chairman further stated that under the ambit of the law, the Commission holds no legal authority that empowers them to investigate a candidate who has been validly nominated prior to a by-election and advised that claims against the legitimacy of a candidate have to be brought to the Court by way of petition.

Prime Minister Roosevelt Skerrit also broke his silence on the matter on the eve of the by-election.

He insisted that Henderson was duly nominated in complete conformity with the constitution and the provisions of Dominica's laws and professed that adversaries to his party's nominee were only seeking to create confusion. Skerrit further stated that Henderson has not received a salary from his government since 2019, which according to him, further legitimizes his nomination.

Clearly unsatisfied with the Chairman's response and his denial of any legal obligation to investigate Dr. Henderson's nomination, Linton again wrote to Stowe on November 25, in which he posited that the Electoral Commission had reduced itself to a "farcical instrument of the 'No Law No Constitution' modus operandi of the Roosevelt Skerrit regime, unwilling and unable to conduct free and fair elections with integrity in the Commonwealth of Dominica."

He said the meeting held by the Commission on November 15, 2021, where they decided to not accede to his request to bar Dr. Henderson from the by-election confirms a most unfortunate "dereliction of duty and a squalid betrayal of the public trust," seemingly acting on behalf of Dr. Henderson and the DLP.

Accordingly, he said that the court must petition to depose Henderson.

Since the possible threat by Linton of legal action, both independent candidates in the by-election voiced that they would not support the legal battle.

However, former Press Secretary in the Skerrit administration, Sean Douglas who endorsed Gabriel's candidacy, welcomed the court's intervention as he told The Sun, such ruling would set precedents on such matters moving forward.

"In 2009, Roosevelt Skerrit and Petter St Jean both had doubts about their legibility to contest the then general election and they wrote to the French embassy for clarification...so I think after they have sought and received advice from a number of attorneys, I think it is a good idea to look at the possibility of legal actions."

Douglas further expressed doubt in the Prime Minister's claims that Henderson had not received a salary from the incumbent government for three years.

The Sun sought comments from the "concerned citizens" on whether they would support legal actions to no avail.