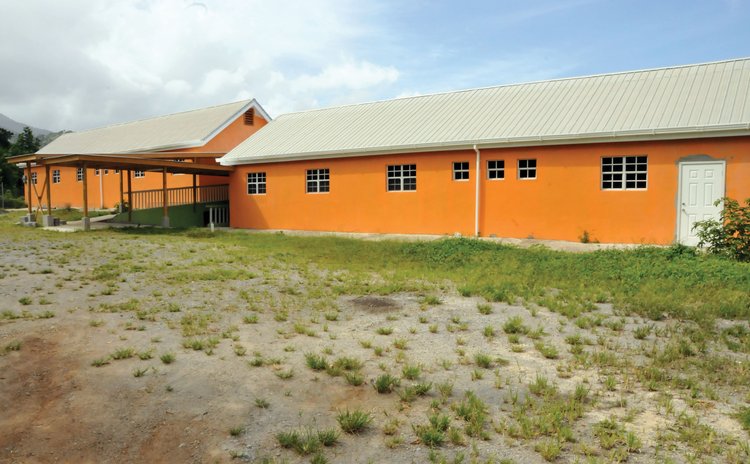 The new Grotto at Belvue Rawle

Frustrations, hard work, disappointments, chopping and changing and cash constraints: all these have made completing the new Grotto Home for the Homeless a particularly arduous task.

But spokesperson for the Home's board of directors, Parry Bellot is hoping that its residents will spend Christmas next year comfortably ensconced in their new dwelling at Bellevue Rawle.

He said that the project to build a new Grotto Home began in 2008 with $500,000 paid by Government to acquire the property in Bath Estate where the Home was formerly located.

Bellot explained that the committee intended to seek additional funding from the outset because the venture was projected to cost about $2.5M, based on architectural designs and estimates.

Then the 2007-08 global financial crisis hit the donor community hard, and many local and overseas agencies and institutions that the board approached for funding were unable to assist.

This was a major setback, and since then the project had been limping along, with chops and changes to suit the new realities, Bellot said.

Initially, the new home was to have six smaller dormitories and house 100 residents, Bellot explained. But, to cut costs this was later downsized to two larger dormitories housing 60 residents.

Also, the plan to have a separate building for an eating area, the kitchen facilities and offices had to be scrapped, he said, and the revised plan is to fit these into the general construction.

Bellot also pointed out that changes to the original plans led to new issues to be dealt with, and builders encountered unexpected and costly difficulties.

As work progressed, a slope needed to be flatted and badly constructed doors had to be rebuilt; and recently a new, unused septic tank was found to be faulty and has to be replaced.

Bellot said, "We had hoped to move up to the new place a couple of years ago. The finishing things have taken a lot more time and money than we had envisaged…

"Also, we ran into a serious problem . . . to save on costs we had been advised by government to utilise government services and even the prison labour as much as possible.

"I can categorically say the government services were… not up to scratch… and even the prison labour. It turned out, in a way, to be a bad decision…

"We had a lot of inferior work done. For instance our septic tank developed problems even before it had actually been used," Bellot noted.

The board asked the authorities for help and got an increase in Government's subvention to the Home; also, residents' 'pauper's allowance' is now paid to the institution instead of the individuals.

However, according to Bellot, the authorities maintained that the project should use Government services as much as possible as a cost-cutting measure.

"Honestly, that turned out, in my mind, to be part of the problem. . . . a lot of wrong advice…but the key thing was the problem with the prison labour. . . that created significant constraints," he said.

Bellot noted that planning for the amended project was done with help from Government services and a new spot for the kitchen was recommended.

However, this has created a problem because health officials are now not pleased with its new location in relation to the septic tank, he said.

Another constraint is that the Home is run by volunteers who find it challenging to devote the time required to oversee a project of that size, especially when the financing is not readily available.

Bellot disclosed that the appointment of a project manager has been recommended, but this is being considered in the context of the need to cut costs.

Furthermore, Bellot believes the board running the Home needs more members and he doesn't think enough is being done to increase membership.

With cost cutting measures in place, just about $2M has been spent on the project.

Speaking about whether the new Home would accommodate drug addicts and vagrants when completed, Bellot said that would require special arrangements.

He said it might be possible with appropriate staff and separate accommodation and perhaps with a hall where they can dwell when they are not sleeping.

Bellot added that vagrants and drug addicts generally do not "mix well" with the elderly and tend to misbehave, a lesson learnt from the Home's soup kitchen initiative.

Residents will not be moving to a new Grotto Home this Christmas and, as they need all the help they can get, Bellot is urging the public to donate generously to the Home this season.

He said arrangements will be made to collect cheques or cash directly from donors.