New Kids in an Ole Skool 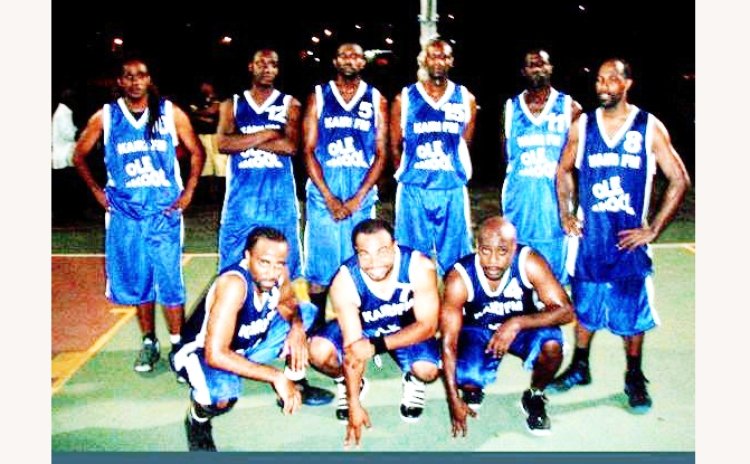 OLE SKOOL after one of their matches

In the USA where the game of basketball was invented, Ol' Skool is an American "new jack swing and urban R&B (Rhythm & Blues) group" that was formed in 1996. In Dominica's basketball arena, however, OLE SKOOL is one of the youngest teams in our National Basketball League, not necessarily in terms of the average age of the players, but the number of years that the unit has been competing.

At the time when they made their debut on the Lindo Park hardcourt in 2011, playing in the 2nd Level Division, Ole Skool sported no teenage players or even players who were in their 20s. However, these new kids on the court played with great zeal and their energy levels probably surpassed that of some of their opponents who were half their age. For example, Levi Baron, one of Ole Skool's oldest and more experienced players is sometimes referred to as the "bugs bunny rabbit" of the team, sometimes top- or high-scoring for his 'skoolmates', and even sometimes coaching a team in the League's senior division immediately after an Ole Skool encounter. Robert Guiste is another of the team's high-scorers.

According to members of the side, they "wanted a team of older players who knew the sport, as most of the individuals did not have time to practice on account of various other commitments." And so, Ole Skool members chose that name because they "purposefully wanted older guys on the team;" and that name fitted perfectly.

And, as team Captain Colbert Bertrand notes, "The team had a lot of potential, but we only wanted to play for fun."

Ole Skool's Class: The individuals who played basketball with Ole Skool all had prior playing experience, some having even played with senior division teams in DABA competitions. A few had also played for more than one team before forming or joining Ole Skool.

Low-Scoring Affairs: The 2013 basketball season had seen Ole Skool involved in some frigidly cold, low-scoring encounters. That year they scored only a paltry 35 and 42 Pts against Juggernauts' 48 on both occasions; 42 vs CrossOver's 55; and 46 vs Juggernauts' 59 in the Playoffs.

That year had also seen the team with some alarmingly low Quarter-scores. For instance, netting only 4 Pts in the 1st Quarter of their game versus CrossOver; 4 Pts vs Juggernauts (4th Quarter), and 5 Pts against Paix Bouche Snipers in the 4th Quarter of their encounter.

Flexing Muscles: However, come 2014 Ole Skool came out with a bang, sinking the highest number of 3-Pointers (36) in the Playoffs in their Division. They also blew-out Rangers by 61 Pts (105-44), and burnt 31 Pts in the 1st Quarter of their match versus Rangers.

Over-Time Kings: For 2013 and 2014 Ole Skool were engaged in no less than 5 Over-Time (O-T) encounters for those two seasons combined. And the good news is, the 'Ole Skoolers' emerged 100% victorious in those matches for a perfect 5 from five.

For starters, in 2013 the team sniped Paix Bouche Snipers 56-51 after scores were tied at Regulation Time at 46-46. Their second O-T victory in that year's Regular Season was against Black Hawks whom they took down 64-59 (49-49 at the end of 40 minutes playing time).

Other Noteworthy 2015 Performances: The team also burnt an aggregate of 99 Free-Throws in their eight Play-Off matches in 2015.

That season had also seen Ole Skool amassing a total of 414 Pts in their seven Regular Season matches at a scoring rate of 59.14 Points per game and conceding 471, following which they upped their performance in the Playoffs, scoring 528 Pts total (at 66 PPG) in 8 matches but conceding 585.