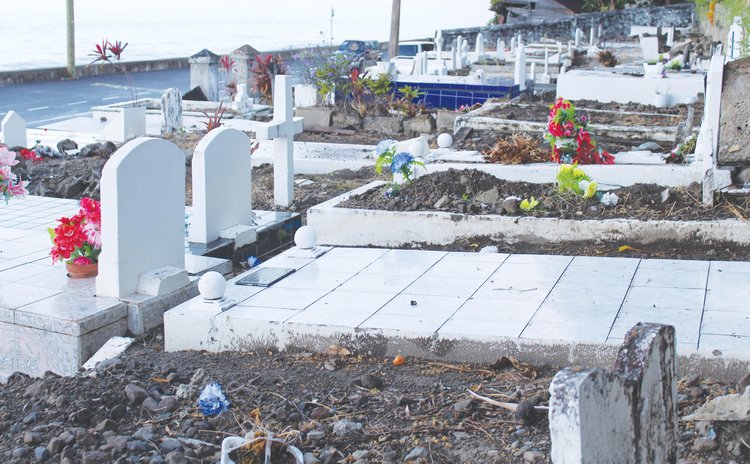 "Disgusting! Callous! Insensitive! To go to a funeral and have to walk through dug up pieces of clothing and bones to get to the burial grave. Appalling!"

That's what someone wrote on her Facebook page last week which aptly describes the situation at many cemeteries around Dominica especially at Roseau, Pointe Michel and Massacre.

In 2014 when the SUN investigated and reported on the condition of cemeteries, Anthony Scotland, then Chief Environmental Health Officer (CEHO) said there were major concerns over the "lack of burial space" at these communities. They were "almost filled", he said.

Three years later, Ferdinia Carbon the new CEHO told the SUN, in an exclusive interview, that the situation at these cemeteries has not changed.

They are still filled to capacity.

She added: "One of the things that makes it even more difficult, is that we don't have in many cases organized cemeteries where you have numbers given to graves and you have names of the person buried with a date and this tells you where you can dig.

"Presently, we have some churches asking us for permission to establish cemetery and we are asking them, as part of the conditions, to have it organised in such a way that you must know where to dig… proper recording, alignment of graves," the CEHO said.

But there has been a new development that has eased the pressure for space at the cemeteries around Dominica. Families are now establishing their own.

"I can tell you that we are having a lot of that. Those asking must have at least an acre of land and then we come and do the inspection along with the Ministry of Social Services," Carbon said. "I must tell you that since this started, we have not had people making any complains to us about graves being dug and finding bodies which are not properly decomposed."

But the situation at the public cemeteries needs to be rectified, Carbon said.

"I must admit to you that we have not had any follow up re the situation in a few years," she said. "The owners of the cemetery need to get proper demarcation of where people have been buried so that the problem cannot resurface. We definitely need to do some follow-up assessments".