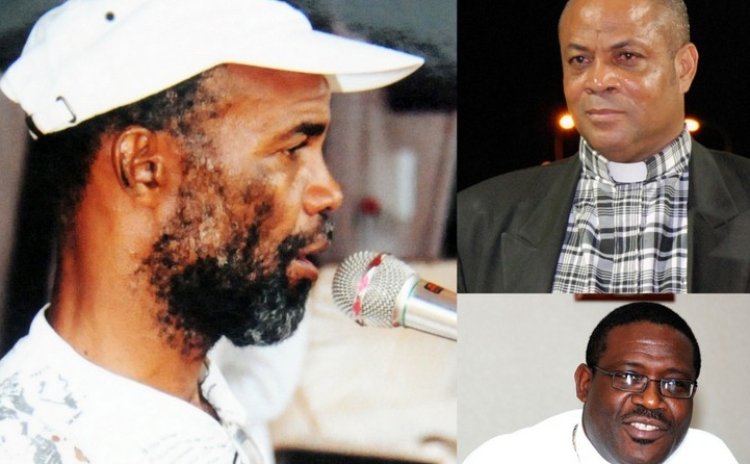 "I have resigned from the church parish council and all the other committees…I just go to church now, because I am vex at what the Bishop is doing and has done," Thomas told the Sun.

Earlier this year, Bishop Gabriel placed LaFleur on administrative leave after a Portsmouth woman wrote to Bishop Malzaire alleging that 19 years ago when she was a minor, LaFleur molested her.

In an exclusive interview with the SUN Thomas who has openly taken on Bishop Malzaire on the issue said he had privately sought an audience with Apostolic Nuncio (the Vatican's ambassador to the Caribbean) Archbishop, Nicola Girasoli when he learnt that he would be coming to Dominica to celebrate the feast of Christ the King.

"He (Apostolic Nuncio) was surprised and we were also surprised. Five of us (including Fr. Reggie) met him after the mass at the Stadium at the conference room which lasted for over an hour. He was rather shocked to have learnt that Fr. Reggie had not gotten a letter from Bishop Malzaire stating that the case had ended…this is injustice to the priest," Thomas stated.

According to Thomas, on October 13, 2013 a delegation from the St. Patrick's church met with the Bishop in his office to deal with the Fr. Reggie matter.

"He was questioned and told us that he was awaiting the decision of the Review Board and that the matter was "more complex" than he thought. I am now questioning this because it's clear the matter was closed. He sent Fr. Reggie on administrative leave and he is the one who has to get him back. The lady from Portsmouth who made the allegations was in Trinidad and also met with Apostolic Nuncio Nicola Girasoli who has told us that, that matter has been closed," Thomas said.

Thomas said he is convinced that Bishop Malzaire knew the matter was closed long ago and yet he kept giving them the impression that it was with the Review Board all the time.

He also confirmed that two new letters have surfaced, one from a woman from Pointe Michel and the other from Massacre/Mahaut alleging sexual misconduct.

"They are unfounded and baseless allegations against Fr. Reggie and to show you how dirty that it, they are stating that it happened just over 35 years ago; Fr. Reggie was not even a priest," Thomas said.

When we contacted for his comments on Thomas's allegations, Bishop Malzaire said that while he acknowledged that he was aware of the meeting held with Apostolic Nuncio, he was not privy to the discussions and did not want to comment on the matter.