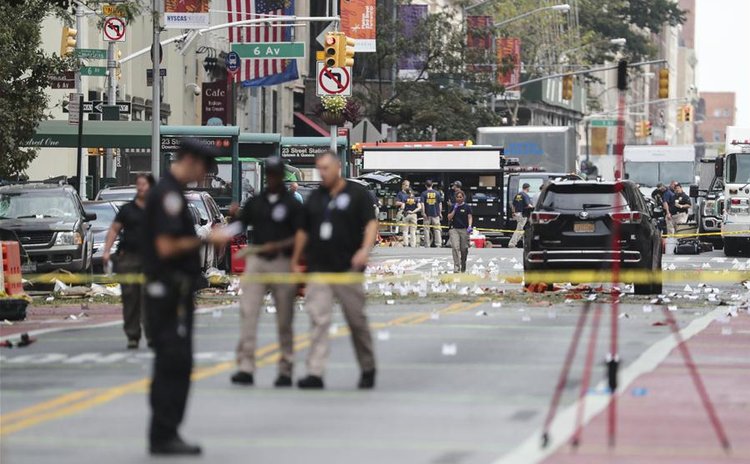 "You will see a very substantial NYPD presence this week, bigger than ever," de Blasio told reporters at a press conference on the explosion.

Police officers will be deployed in force in key public locations around the United Nations headquarters and the Times Square, including the newer units of Critical Response Command and Strategic Response Group, said de Blasio.

The city will also see an increased bag search and canine activities throughout the mass transit systems, said city officials.

At the press conference, the mayor said all 29 people wounded in Saturday's blast were released from hospitals and the motivation behind the explosion remains unknown.

He termed the Saturday blast which occurred around 8:30 p.m. Saturday EDT (0030 GMT Sunday)) in the popular Chelsea district in west 23rd street, Manhattan, "a very serious incident", saying a lot more work needs to be done to find out the motivation behind the blast.

He called the blast an "intentional" and "criminal" act. However, he declined to call the blast a terrorist attack. "We'll not jump to conclusions," he said.

A second explosive device was found a few blocks near the explosion site.

The mayor noted there was no specific and credible threat against the city, calling for the vigilance of New Yorkers and asked for tips and information from the public.

He also said there was no specific evidence of connection between the New York explosion and a New Jersey pipe bomb blast, which happened on Saturday along the route of a Marines charity run, causing no injuries or damage.

Meanwhile, New York City Police Commissioner James O'Neill said at the press conference that no one has claimed responsibility for the New York explosion, which he categorized as a "violent criminal act".

City officials confirmed that the explosion in the popular Chelsea neighborhood was caused by a bomb with "components indicative of an IED", not an accident.

New York police are beefing up extra security at bus terminals, airports and on subways in the city for the UN General Assembly week.

In an earlier press briefing, New York State Governer Andrew Cuomo also said the state will be deploying an additional 1,000 state troopers and members of the National Guard throughout New York City.

The suspects and motives were still unknown, and investigations were still in early stages, according to city officials.

Also on Saturday night, a man wearing a private security company uniform stabbed nine people at a mall in St. Cloud, 65 miles (105 km) northwest of Minneapolis, the capital of the U.S. state of Minnesota, before an off-duty police officer shot him dead.

Three of the nine victims were hospitalized, one with life-threatening injures, local police said on Sunday at a news conference.

The U.S. Federal Bureau Investigation has investigated the Minnesota stabbings as a "potential" act of terrorism.

CNN cited a police chief in St. Cloud as saying that there was no evidence at this point of a link between the New York blast and the mall stabbing spree.