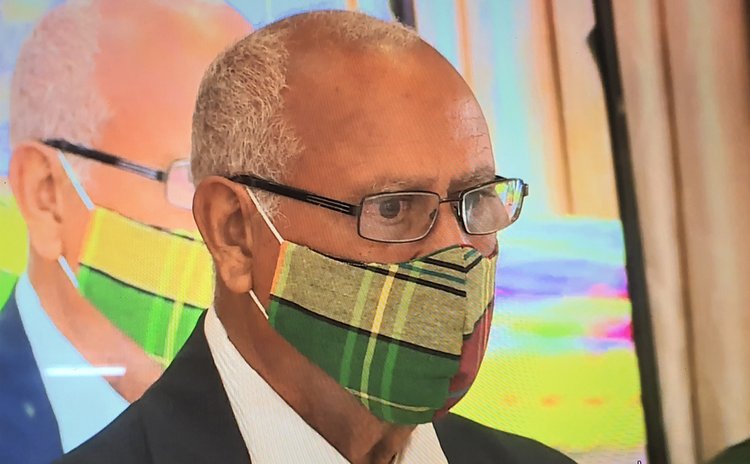 Local businessman Paul Ainsley Green who was among three recipients bestowed with the nation's second-highest award this year attributes much of his success to the dedication and hard work of his employees.

Green was awarded on November 3, 2021, as part of the annual national award ceremony, recognised for his contribution to the business sector.

Speaking exclusively to The Sun, the businessman said, had it not been for the dedication and commitment of past and present employees, the household name of Green's wholesale and supermarket would cease to exist.

Involved in the commercial business sector in Dominica all his working life, Green emerged from a renowned family business at the Dominica Dispensary from his childhood where he learnt the rudiments of business management and the effective delivery of services to the company clients.

In the mid-1970s as the company broadened its portfolios of products and services to Dominica's populace, the visionary businessman saw an opportunity to offer wholesale distribution of primarily food items to small businesses in the Roseau area.

In 1979 he officially registered Green's Wholesale, as a sole proprietor and executive manager of the company.

The company then expanded its range of food items and is now a leading distributor and agent for reputable international and particularly regional food companies.

Green said his passion to serve not only city folk but those in the rural area started his distribution system island-wide, a venture he says he was heavily criticized for by his colleagues in the starting days.

The businessman later acquired the property in Wallhouse, Loubiere, and opened the Green's Supermarket there in 2008 to serve the customers in the south and southeast of the island in particular. In its expansion, the company has grown from an initial staff of five to a current payroll of over 80 employees.

Continuing its full credence to the company motto "Prices are born here and raised elsewhere," Green told The Sun, this has kept his company in good stead with Dominicans.

Severely impacted by the passage of Hurricane Maria 2017, as a result of his tenacity and commitment to the development of Dominica, his businesses have since been fully restored and services improved.

Outside of his work responsibilities, Green has been involved in public service activities serving as mayor of the city of Roseau in the early nineties, where he reorganised the system of tax collection and was known for his personal involvement in his " Keep Roseau Clean Campaign."

A strong supporter of the Dominica Grotto Home for the Homeless from its inception, Green served on its board of directors and provided material and financial support in its operations.

Green has been a member of a renowned private club, the Union Club, and its successor the Dominica Club, serving as a board member and president up to its demise in the 2000s.
He joined the Dominica Jaycees in 1964 and was involved with carnival activities, and was himself a leading member of the Thunderbirds Carnival Band from its early years. He continues to give support and provide sponsorship to current carnival activities promoted by the Festival Committee.

A committed member of the Roman Catholic Church, he sits on the Cathedral Restoration Committee and is involved with its fundraising activities.

The other awardees at this year's 43rd Independence celebration were, The United Nations Development Programme (UNDP) who received Dominica's highest award, the Dominica Award of Honour; ambassador Mrs Loreen Bannis Roberts, and the Maria Holder Memorial Trust were the other recipients of the Sisserou Award of Honour; Mrs Rosemund Edwards, Mrs Regina Joseph, Mr Hasselt Williams, Mr Richard Letang and the COVID-19 Response Team, including the Health Team, Commonwealth of Dominica Police Force, Fire and Ambulance Services, the Dominica Air & Seaport Authority (DASPA) and the Customs and Excise Division, all received the Meritorious Service Award.