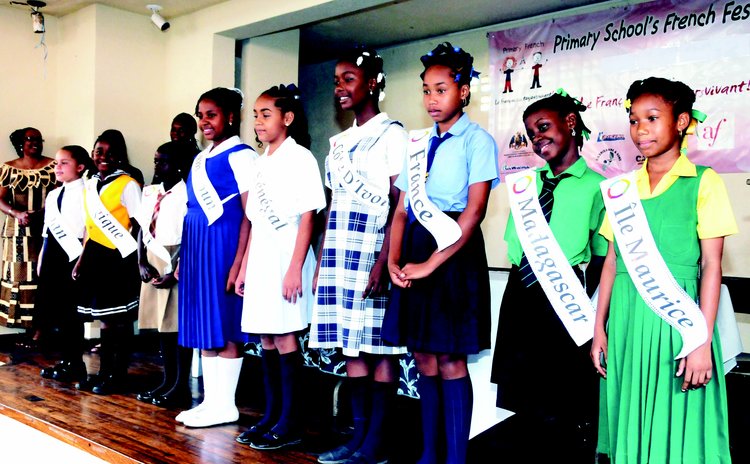 A pageant, Mademoiselle Francophonie, is expected to be the highlight of the 2013 Francophonie Month which began here on March 6. Nine primary school students will participate in the event schedule to be held at the Arawak House of Culture on March 31st.

"We thought the pageant would be one of the ways to showcase the talent of our primary school students," said Foreign Language Coordinator Charlene White –Christian at a ceremony to introduce the participants held at the Alliance Francaise last week.

"We are happy to have these nine represented, maybe next year we may have twice that many," White-Christian said.

The aim of the festival is to showcase students' achievements in learning French culture and expression and, according to Solange Defoe Payne, the President of the French Festival Committee, the festival is expected to motivate and reward primary school students.

Observed under the theme Le Francais…Toujours Vivant (French is an Opportunity), students from 90 percent of Dominica's primary schools will assemble to celebrate the French language through song, dance, games, artwork and quizzes and they will be rewarded for their acquisition of the French language.

As part of a week of activities, scheduled for March 18 to 23 the French Festival is planned for March 20th; it will be held at the Goodwill Primary School auditorium. Another highlight of French Week is an exhibition depicting various aspects of French culture; it is to be held at the Alliance Francais from March 18- 23rd. Primary schools throughout Dominica will also organise special French assemblies through French Week to observe Francophonie Day, March 20th. The theme for Francophone Day is Le Francais…est une chance.

Activities to observe Francophone Month began here on March 6 with a play entitled La Cage at the Arawak House of Culture organised by Alliance Francaise de la Dominique'. Additionally, a poetry evening featuring the works of Gilda Nassief was scheduled for the Alliance Francaise on March 15th

On Wednesday March 20, Dominica joins 57 other countries and 20 observers of the International Organisation for La Francophonie in celebrating International Francophonie Day The celebrations end with a French Cuisine demonstration, by a retired French chef residing in Dominica on April 4th , organised by the National Commission for la Francophonie.