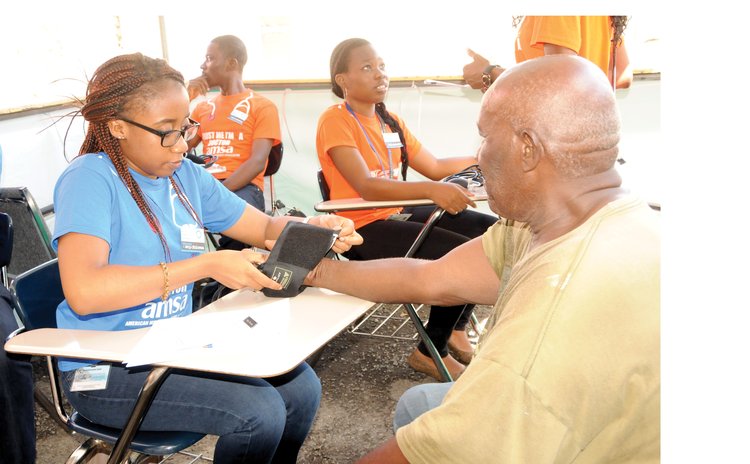 Taking Blood Pressure at an All Saints University Clinic

On an ordinary day last week, a young working Dominica woman queued up at the Dominica Grammar School along with hundreds of other people hoping to see medical personnel from the United States navy hospital ship, the Comfort.

This woman, who recently had surgery, was having complications and wanted a free diagnosis and treatment.

She was among the anticipated 10 thousand Dominicans, who otherwise could not afford, who Prime Minister Roosevelt Skerrit boasted would get free medical care through the Comfort.

"It [the number of people flocking to the ship] is a reflection of his health policy," one former senior public servant told The Sun in criticising Skerrit.

The woman standing in line was among the lucky ones, in that she was able to pay for her surgery. But it did not come easily.

"I took a loan, then [her employer] gave me part of it," she told The Sun. Still, this only added up to half of the $8000 she required. However, after much pleading, the government agreed to cover the remainder.

The affordability of healthcare here was thrust to the fore after Skerrit announced in his budget presentation that he would introduce a tax on sugary drinks in order to help improve Dominicans' health. It was magnified with the Comfort's visit.

"That [the number of people flocking to the ship] to me demonstrates that our health care system is in trouble when people see freeness as an alternative," one person who has worked in health for about three decades told The Sun.

The picture painted by senior and experienced healthcare workers with whom The Sun spoke was not a healthy one, with virtually all suggesting that any serious ailment is coterminous with certain death.

That was the working woman's fear.

"I had so many tests, the medication, If I don't get the help then I'm screwed," said this woman, who spoke to The Sun on condition of anonymity.

She said she had met another woman who needed surgery for a hernia "and the doctor charged her S7000 and she don't know what to do".

"If you don't have the money, that's it," she stressed with an air of resignation. "I was stressed out, I was worried, I was actually worried . . . if you don't get the help from them you're still screwed because the doctor will not do it for you."

This is the situation faced daily by people stricken with cancer, itself a traumatic experience for both the patients and their families.

There has been "an explosion" of diagnoses of cancer of all types here in recent years in both men and women and a "frightening" number of young people of productive age, said Delia Cuffy-Weekes, the public relations officer of the Dominica Cancer Society.

The reasons are unclear but the concerns are the same.

The problem is complicated by the fact that there is no full-time resident oncologist and treatment options are limited to chemotherapy. So anyone diagnosed with the disease must seek treatment abroad, mostly in Barbados, Guyana or Trinidad.

"Some people who have their own savings, they run out of it very quickly. . . what you thought was a nice next egg, you go through it (in a hurry) and you run out," the Cancer Society PRO said.

This scenario was played again and again by the healthcare professionals who suggested to The Sun that thousands of Dominicans were gambling with their lives because of economic hardships.

One person talked of patients trying to "bargain" their way out of prescriptions which they simply could not afford.

"People come, they need antibiotics, they need three days medication, they negotiate for two days. Some of them have to do blood tests, they don't do it," lamented this person who has worked in health in both the public and private sectors. "People just can't afford so they look for shortcuts."

These are deadly risks, this healthcare provider said, explaining the complications that can.

"If you are prescribed for high blood pressure and you don't take the medication, then the quality of your health drops, and your medication will have to increase and you can't afford it. So you become a raging lunatic. The long and short of it is you get worse and you become an even bigger burden on the country. . . You can say the conditions will get progressively worse and they can die. Especially, diabetes and hypertension, their organs (can fail) and they can die."

That's the fear of the woman standing in line, who said she did not have health insurance because it was much too costly. She needs even more surgery but said: "I don't know what I will do. I'll just have to wait."