Jamaican detectives report that there is no evidence of an attempted coup; meanwhile, local police officers say they are being investigated for leaking a coup report to the press 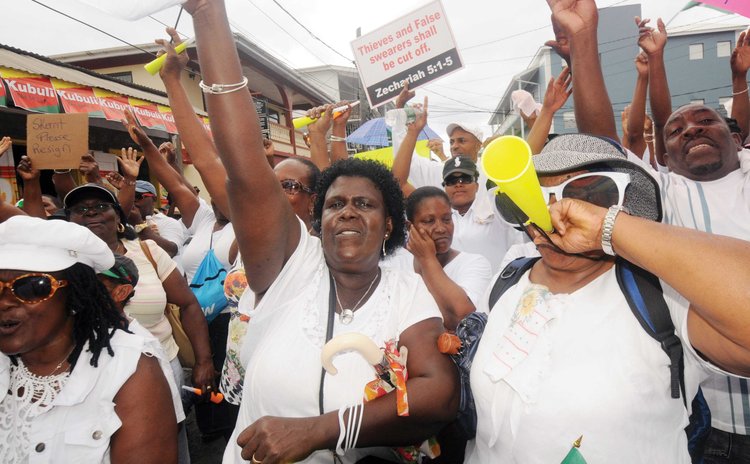 Local police investigators are now being probed by foreign detectives in a bizarre twist to an already weird attempted coup story.

"High ranking police officers of the Dominica Police Force who were ordered by the Chief of Police to write statements in their own handwriting for the after-meeting disturbance on 7th of February 2017 in Roseau are now knowing that they are being investigated to find out if they are speaking the truth," a police source revealed last week.

"The Jamaicans (investigators) left with their statements for analysis like the officers are suspects in the matter. The Skerrit administration is dissatisfied with the statements of the officers because they aren't giving credence to Skerrit's figment of imagination of a coup," said the source who has first-hand information on the investigation but who requested anonymity because he was not authorized to speak publicly on the investigation.

The SUN has learnt that foreign police officers from Jamaica who were in Dominica investigating what Prime Minister Roosevelt Skerrit said was "an attempted coup against his government" left Dominica on March 3, 2017. The foreign officers were here to collect evidence of the attempted coup but the only evidence there appears to be are of simple obstruction and malicious damage, said the source.

Recall that prowling young men louted, burned and destroyed property in Roseau on 7 February 2017 after a public meeting organized by the opposition United Workers Party over apparent mismanagement of the Citizenship by Investment Programme. In an address to the nation a day later, Prime Minister Skerrit suggested that the opposition attempted to overthrow his government by using a truck, laden with sound equipment, to ram into the Financial Centre.

Following the events of 7 February 2017 local police arrested, interrogated and subsequently released four members of the opposition. The Government then called in foreign sleuths to complement the efforts of local policemen.

However, The SUN has been informed that the investigators have concluded that because the perpetrators who allegedly committed these acts are so difficult to identify, the State will find "tremendous difficulty in successfully prosecuting them."

The source also confirmed that copies of the reports from the investigators are sitting on the desk of the Chief of Police Daniel Carbon, Minister of National Security Rayburn Blackmore and Prime Minister Roosevelt Skerrit.

"When the Minister of National Security and the PM read it, they questioned the truthfulness of the statements of the police officers and have directed that the foreigners leave with the officers statements for further analysis. So here you have it, police officers are now learning that they are being investigated and they are extremely disturbed and are now saying their honesty is being taken for a ride," the source said.

According to the source, this latest development in the investigation has affected the proper management of the police force.

"Police officers are repeatedly reporting sick and are fed up with the way Skerrit's government is treating them," the source said.

The source also confirmed that the Chief Carbon has been directed by State Security Minister Blackmore to investigate the leakage of the foreign investigator's report and has assigned inspector Pellam Jno Baptiste to the task; he is to report his findings by March 27, 2017.

Blackmore confirmed to THE SUN that the investigators had left Dominica but they will be returning.

"The investigation continues, they (foreign police officers) had some personal issues to deal with and will be return to continue before month end March 2017," Blackmore said.

Asked to comment on Inspector Jno Baptiste's assignment to investigate who has leaked the information to the press, Blackmore said: "I am not willing to comment on that…I don't get involved in the affairs and running of the police force; that is for the Police Chief."