No jab, no job

To save the economy, Antigua's Gaston Browne led the way with mandatory vaccination, will Skerrit follow? 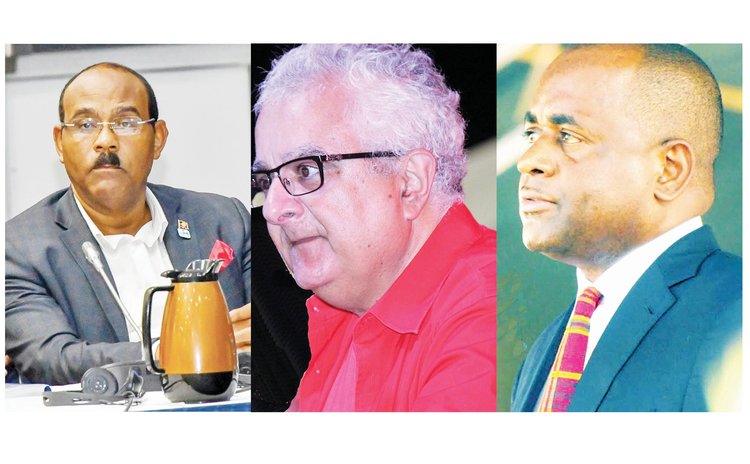 Twenty-nine-year-old Monique*, a Dominican working at a popular resort in Antigua, is feeling trapped "between a rock and a hard place," following the most sweeping of mandatory vaccination measures introduced by the Gaston Browne government.

"I think what they are trying to do is if you don't get vaccinated then you won't be able to live because you have to work, and if you don't work you don't have money, then you won't be able to pay your bills, buy groceries and stuff like that," said the young hotel worker. "To me it's just putting somebody between a rock and a hard place. It's like you have no option but to take the vaccine if you want to live."

Arguing that the coronavirus pandemic represented "an existential threat," the Browne government announced that as of 20 September, all unvaccinated government workers, including the public service, statutory corporations, and companies in which it owns majority shares "shall be required to remain at home until proof of vaccination is provided."

It added that as of 1 October, unvaccinated public sector employees "shall be required to remain at home" until they can show proof of COVID-19 vaccination. Those who fail to comply will not be paid, warned the administration. Exceptions have been made for people who can't be vaccinated for medical or religious reasons.

The policy also applies to frontline workers in the tourism industry. And the administration has called on the private sector to follow its lead, throwing Monique and many more like her who are not vaccinated, into a state of panic.

However, there are those, such as the noted constitutional attorney, Anthony "Tony" Astaphan, who assert that with the Delta variant threatening to leave the economy in shambles, and with inoculation levels at just 33 per cent - well short of what's needed for herd immunity – it is the government that had no choice but to take firm action.

In fact, Astaphan argued that with several Caribbean countries, including Dominica, in a similar position, they, too, should move quickly to get public and essential frontline workers to take their shots in the arm.

"[With] the current crisis facing the CARICOM countries – Jamaica, Bahamas, Trinidad, Grenada, St Lucia, Dominica, Antigua – it would be extraordinary if the prime ministers kept their hands folded and continue with this mantra [of] no mandatory vaccinations," charged the attorney. "At least they should add the words, 'for now,' because the circumstances are changing rapidly and decisions have to be made and may have to be made in the right direction, which is mandatory or compulsory or universal vaccination - choose whichever phrase you think is the more appropriate one to use."

The Dominica Public Service Union has already made it clear that it's opposed to mandatory vaccination, with Thomas Letang, the general secretary, insisting people ought to be given a choice.

However, Astaphan, who advises the Browne administration in St. John's and the Roosevelt Skerrit government, called on the trade union movement to throw its support behind efforts by the governments to protect workers and the general public, particularly in light of the legal opinion by two prominent Caribbean-born jurists, Sir Dennis Byron, the former Caribbean Court of Justice president, and Rosemarie Antoine, dean of the law faculty at the St. Augustine campus of the University of the West Indies, that governments of the seven-member Organization of Eastern Caribbean States (OECS) had constitutional support for mandatory vaccination.

"Those that are refusing to be vaccinated do not have rights that are superior to ours, or trump ours, or can hold a business or a public place, or the economy, or tourism or any other facet of social economic and personal life, hold it hostage by saying, 'I'm not getting vaccinated, but you can't tell me I can't come to work'. And I wish I would see a bit more understanding on these critical issues in the private sector from the trade unions - some of them are acting like it's a cold war and seem to be oblivious to the fact that people are dying in your hospitals almost every day, and these hospitals are overloaded with people that are unvaccinated," Astaphan told The Sun.

"And it will be for me extraordinary for unions to threaten industrial action simply because a government or an employer is prepared to put in place measures to protect the lives and health of everybody."

Mandatory vaccination mandates come with a level of political risk, agreed Peter Wickham, the political scientist and pollster who has worked for both Browne and Skerrit.

However, Wickham contended that it was imperative that the leaders look beyond naked politics and take decisive action to prevent their economies from sinking even further.

"The OECS economies are in freefall now, and the fact is that they can't pull it back because they have to get their vaccine levels up, and get them up really, really fast," Wickham told The Sun. "These guys position is . . . being dictated by a sense of urgency and reality that says that in three months' time, at this rate, they are not going to have any economy to speak of because the economies have completely collapsed."