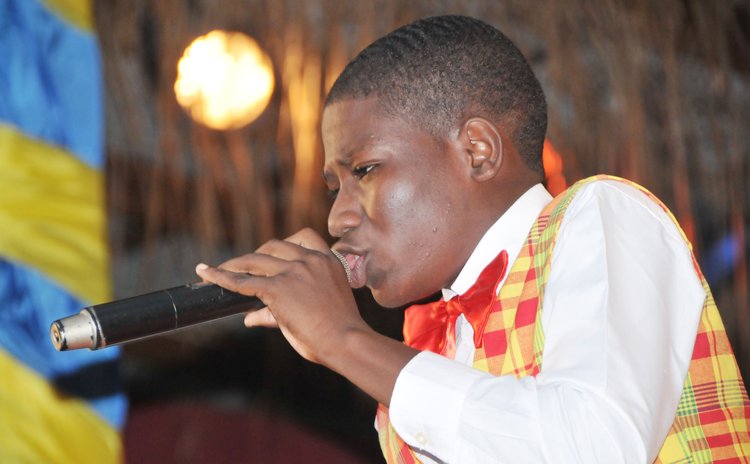 Irish Kid performs at the competition

Irish Kid is one self-confident kid. And he's not kidding when he says his dream is to 4-peat in the national kid's Calypso competition.

"I heading to make history…I will be making history- Dice, Dutchess, Professor, they did it three times now I have the opportunity to do it four times," he said.

Last week Lamar "Irish Kid" Irish won the 2016 Junior Monarch; the show, organized by the Leo Club of Dominica was held at the Harlem Plaza Newtown on January 28.

Irish Kid outshone the twelve other young calypsonians with his performance of "All for Each and Each for All this Year" written by Livingston "Lord Spenser" Cassel.

He noted that for this year's competition he received his song late so he had to work harder to capture the crown.

The First Runner Up position went to Nia "Nicker" Burnette of the Wesley High School; her song was entitled "Goodbye" written by Steve Hyacinth.

"I feel ecstatic I am quite happy I wanted to win but first runner up is very good," she said.

Nicker said that her song was about saying "Goodbye" to her alma mater, the Wesley High School because she will be graduating soon.

The Second Runner Up award went to Yahbi "De Spider" Frederick of the St Mary's Academy; he sang "A Good Name" a song written by Pat Aaron; the Third Runner Up was Nickima "De Empress" Alfred of the St Martin's Secondary School; her song "Aliens" was written by Ian Jackson.

Meanwhile, President of the Leo Club Kernita Green said that overall it was a "great show".

"I told them that everybody is a winner but at the end of it we all have to be happy enjoy the show and perform to the best of their ability," said Green.

Green also noted that because of Tropical Storm Erika it was difficult to acquire sponsorship; however, she is thankful to those that came on board to ensure that the competition was a success.

She said that the average cost of staging the Junior Monarch Competition is about $30,000.

Furthermore, Green stated that one of the problems that the club faces in staging the annual competition is getting the songs on the airways earlier.

"One of the things that we need to improve is in terms of getting the songs out there earlier for publicity so everybody can be aware that something is happening and the show is something big that they should come out and support," said Green.