No monopoly on basketball team names

Jump Ball: A peak at local basketball then and now 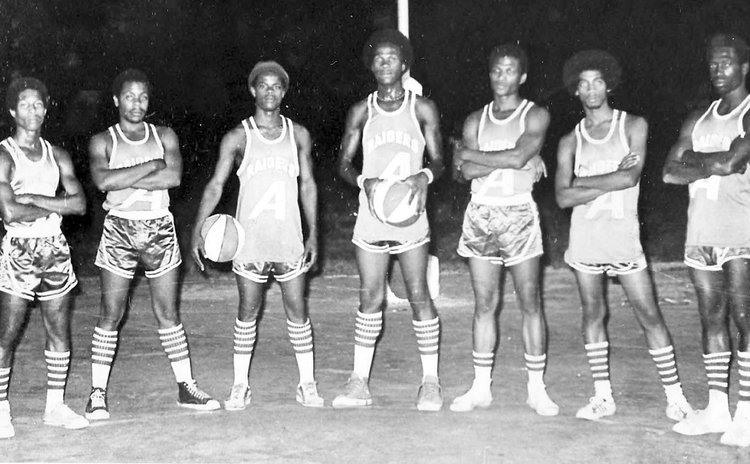 Competitive "League Basketball" has been played on Dominica since the 1960s, and one can say without fear of contradiction that because we play amateur basketball here, no one in The Nature Isle has a monopoly on any team name. Originally, league basketball was played under the auspices of the Basketball Sub-Committee of the Dominica Amateur Sports Association (DASA), which gave way to the Dominica Amateur Basketball Association (DABA) when the latter was formed in the early 1970s.

Yearly, teams enter the "League" hoping to win a championship and some compete for a few seasons. However a few such as CARDINALS, PROS, PROWLERS, BLAZERS and POLICE SPORTS CLUB among others, remained or remain on the fixtures for two decades or longer. Some have graciously bowed out of the league while others continue to make their contribution to the development of the sport here.

However, from time to time the names of teams which played in the DASA and DABA Leagues many seasons – if not decades - ago, reappear on the "modern" league fixtures, with most of the players on these new teams having absolutely no idea that at one time, a team with "their" name may have featured prominently in the National League.

The following teams please take note, as your "predecessors" played in the national league seasons ago:

BULLETS: During the 1970s, at least between 1972 and 1976, Bullets was one of the Roseau-based teams in the Junior Division of the DASA & DABA Leagues. In 2014, we saw the emergence of Blazing Bullets from Massacre, and they engaged other teams in the Premier Division of the DABA league; they did not register to play in 2015 or 2016. In 2015, however, we saw a Bullets team (name change from Trafalgar Rangers?) from the village of Trafalgar registering in Division I (lower men's level) of the DABA.

CLOUDS: Two Clouds basketball teams from the Goodwill community appeared on the local basketball horizon in grand style from the mid-1980s, quickly making a name for themselves. The "senior" Clouds team played in Division I (later renamed Premier Division), and remained on the cards up to 2008 or thereabout, while their juniors (Division II) petered off a bit earlier. Currently, there is a team in the national league known as Cloud. They first registered to play in 2016, in the second level (i.e. the Division I) of the national league.

EAGLES: From the early 1980s and well into the 1990s, two Roseau-based teams carrying the name Eagles were "big-name" teams in the DABA. They played in the two highest of the four Divisions of the national league at the time, and were popularly known as "J.K. Eagles", J.K. being the initials of their sponsor, John Keller, who was residing on Dominica at the time. Currently the Premier Division team from the northern village of Paix Bouche is named Eagles, and at times Super Eagles; they competed from 2013 to 2016, and for a few seasons before.

FALCONS: From the late 1960s through to the early 1970s a Roseau-based team named Falcons played at the highest level (Division I) of the DASA basketball league. Subsequently they moved down to Division II and eventually "disappeared" from the annual fixtures. Almost four decades later, i.e. 2012, another Falcons team appeared on the scene, but this one was from the southern community of Pichelin. Having won the Division I championship in 2013 they were promoted to the Premier Division in 2014, and continued to play in that Division in 2015. In 2016 the community also registered a team in Division I; the senior team place 2nd in the 2016 Play-Offs.

PANTHERS: In the early 1970s, a Roseau-based team carrying the name Panthers played in Division II, then Division I, of the national league. They too did not last long. In 2014, we saw the appearance of Blazing Panthers from Massacre, playing in Division I (the second level), but they did not register to play in 2015 or 2016. Also in the 2013 to 2016 seasons, there was a women's team from the Roseau area named Panthers originally, and now Lady Panthers. That ladies team is not associated with the team from Massacre.

PIONEERS: In early May 1977, the first female team in the history of basketball in Dominica, Pioneers, made their debut appearance in DABA's Division III, playing against all-male teams and actually won their first match - against DGS Jets. Alice Jno. Jules, who was also an active netballer, scored all 28 points for Pioneers in that match. About twenty years later some of the (male) players from the 1960s and 1970s who had made a name for themselves back then formed themselves into a Pioneers team and played in Division I of the national league.

RAIDERS: During the first half of the 1970s a Raiders team based in Roseau competed in the top Division of the DABA league; the current editor of The Sun and the author of this article were members of that team. Around 1987, a Raiders team from Portsmouth appeared on the scene. They first played in Division II, won the championship, and later played in both Divisions I and II of the National League. The participation by those northern teams petered off after several seasons, but in 2015, after more than a decade, a Raiders team (also from Portsmouth) re-entered the National League, in Division I, winning their first game by a Blow-Out.

SHARKS: The first team named Sharks to play in the league was one of the two teams which represented the St. Mary's Academy in the early 1970s. They were the S.M.A. Sharks, but that school team eventually "disappeared". Then in 1988, another Sharks appeared, and played in DABA's Division II League; they too disappeared after a few seasons. And now, over the last few years, we have had still another Sharks team, this one from the fishing village of Scotts Head, participating in the national league. In 2014, they played in the Premier Division, but were relegated to Division I as of 2015.

COMMENT: Dominica's 2016 national basketball league saw teams with names such as All-Stars, Blazers (Premier & Div. I), Crossover, Hurricanes, LA Knights, Ole Skool and Sonics, among others, take to the court. But, by the end of the next decade, will we still have such names on the basketball fixtures? Either as more experienced teams then, or new teams which "borrow" the names of teams from the 2016 League or from previous seasons? Or names such as Cardinals, Flames, Oilers, Smashers, etc.? Don't forget, it's a free-for-all and there is no retiring of team names here. The shot-clock is running.