No progress in crab-backs case 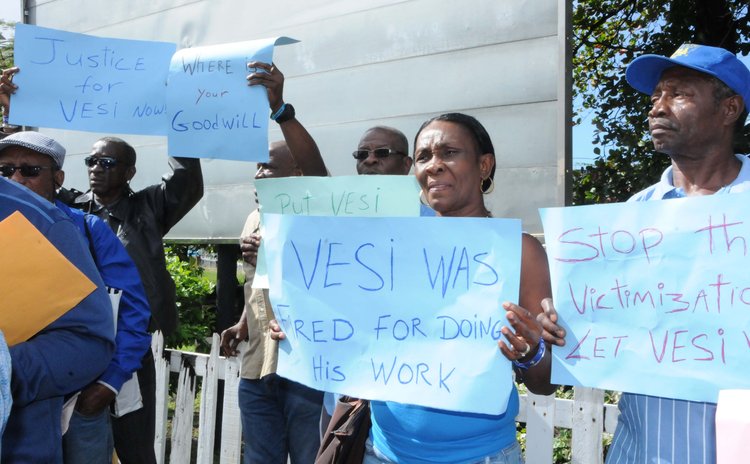 After six months there is still no positive development for Vescort Jones of Marigot. Recall that Jones was a security officer of the Douglas-Charles Airport and that due to unfortunate circumstances he was fired following his involvement with passenger Lennox Linton, the political leader of the United Workers Party (UWP). The issue became a political issue before and after the December 2014 general election.

Jones's problems began when Linton was travelling with crab backs without a permit and Jones allowed Linton to dispose of the processed wild life product before he proceeded to the aircraft.

Responding to the Sun's request for an update in the case, General Secretary of the Dominica Public Service Union (DPSU), Thomas Letang, said the DPSU has been helping to find a solution to the Jones-DASPA problem.

Letang said: "Normally what we do when people have problems and they come to us, we verify their membership whether they are members of the union. Because we have a policy in place that if you are not a member and you come with a problem there are some fees, there are some obligations on your part; for example, when it comes to the whole legal cost to represent you we will not meet that legal cost because you would have not been a member. And what did happen in the case of Mr Jones I wasn't there and the staff member who dealt with this problem did not verify his membership, so at the time he was not a member of the union."

Nevertheless, the union paid a lawyer to represent Jones at the Jones-DASPA disciplinary meeting. Following that hearing, Jones's employment was terminated and the management of Dominica Air and Sea Port Authority (DASPA) gave reasons for Jones's termination. DASPA stated that Jones was guilty of serious misconduct on October 19, 2014 at the Douglas-Charles Airport.

The decision to terminate Jones's employment was based on DPSU's view that he had violated the security department's standard procedure pertaining to passengers attempting to travel with wildlife without the required permit.

"What we did following that letter that was sent to him, we referred the matter to the Ministry of Labour and our correspondence was addressed to the Minister of Labour, which is the correct procedure. We subsequently got a response telling us that the minister had asked the Labour Division to take the matter for conciliation. A date was given (February 27, 2015) and we were prepared to go there but we got information that the management of DASPA couldn't make it and that meeting could not take place," Letang said.

He added that the Labour Division informed the union that another date will be scheduled for the meeting.

"One of the things we can do, if we feel that this matter is taking too long, we will ask the Labour Division to refer it to a tribunal. So we have the option to a tribunal but since we only had one postponement, we are awaiting to see what will happen and we will decide what we are doing," the DPSU general secretary stated. Letang said that prior to the postponement of the conciliation meeting, the union wrote to the management team of DASPA on January 5, 2015 citing that Jones's termination of employment was unfair, unjust and the punishment was excessive and baseless; in the view of the union, DASPA's action was an act of victimization and discrimination.

"I believe the union has done its part; we have done the best that the law provides us to do. I also want to make a statement. Notwithstanding all that we have done Mr Vescort has engaged his own lawyer to write to the Port on his behalf, and we have a copy of the letter, even after we referred the matter to the Minister which was on January 5, 2015. We have a copy of letter dated January 10, 2015 from his particular lawyer. January has long gone and we have no idea what the lawyer plans to do," Letang said. Letang added that the union has no control of the dates for conciliation as well as for meetings of a tribunal.

Nevertheless, a recent decision by a magistrate, who heard a similar case, may have implications for the Jones matter. On March 4, 2015 Magistrate Arly Gill ruled that Section 32 of the Forestry and Wildlife Act Chapter 60:02 which requires that a person must obtain a permit to export wild life products was inadequate because the word "export" was not defined.