No to Dark Money

Campaign finance reform is a major recommendation of the Organization of American States (OAS) report on the 2019 general election: Like others it will fall on ears that don't hear 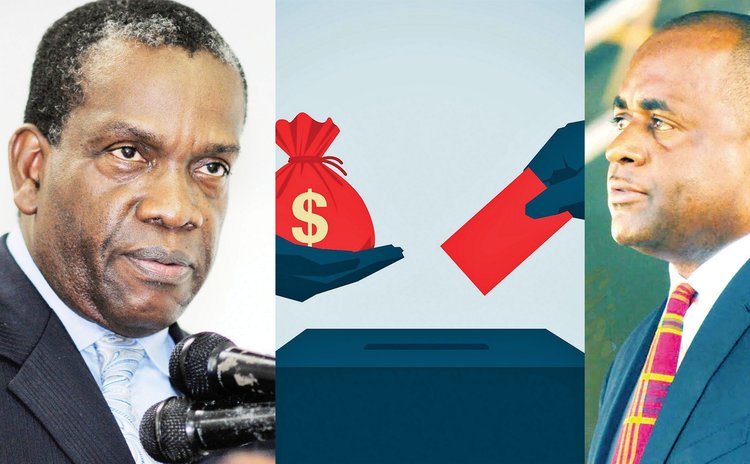 The opposition love it, somewhat. One social activist welcomes it, but with a pinch of salt. They all agree that it's a good idea, but no one is willing to place bets on the Roosevelt Skerrit government implementing a key recommendation in the recent report from the Organization of American States (OAS) on the 2019 general election: campaign finance reform.

"The United Workers Party has made, and continues to make the very recommendations the OAS mission has in the report. So, we totally support the recommendation," said Nicholas George, the party's general secretary, in an interview with The Sun.

"This should be the yardstick by which our election, in moving forward, has to be conducted," added the social activist, Loftus Durand. "That's the way we should go."

In its 65-page report on the poll, which Skerrit's Dominica Labour Party (DLP) won comprehensively after allegedly spending over $70 million on its campaign, the OAS makes reference to "concerns regarding the potential influence of money" in general elections here. It notes that there are no regulations regarding campaign financing or disclosure of sources of funding, no prohibitions on foreign or anonymous sources and no limits on campaign spending.

Therefore, the hemispheric body recommended, in order to make the electoral process more transparent and accountable, government should consider legislation "to regulate political party and campaign financing, including clear limits on campaign spending, the identification of the sources of funding, the prevention of anonymous donations, and the limitation of private and in-kind donations to political and electoral campaigns."

It's music to the ears of those who have been clamouring for electoral reform. However, few believe Skerrit will give up his advantage by introducing such measures. "I do not see Roosevelt Skerrit doing anything in Dominica in terms of levelling the playing field," said Durand, who insisted that the onus is on the people to ensure "what the OAS is prescribing goes forward".

"The Labour party is not intent on taking anything seriously as it concerns electoral reform in Dominica. So, no, I am not sure that they will pass the laws unless there is the pressure from the OAS and the secretariat of CARICOM [the Caribbean Community]," stressed George.

Those who spoke to The Sun believe such laws will level the playing field and greatly reduce the influence of "dirty money" on the voting process.

In fact, according to George, there's no need to spend millions of dollars on an election campaign here, and the unchecked distribution of monies to the voting population by the DLP is nothing short of "obscene".

"In Dominica you do not need the kind of largesse that goes in the Labour party campaigns to win hearts and minds, really," said the UWP spokesman. "To go around the constituencies in Dominica you would need a vehicle and you would need some paraphernalia to entice people to vote for you. But clearly, as has happened in the December 6 poll - we were told in excess of $72 million may have been spent by the Labour party in that campaign. This is obscene. You can do the math, you have 72 thousand people and you have $72 million, how much per person was spent to win an election and when you win the election, we now have to borrow money to do things to deliver socio-economic programmes to the people."

If the OAS recommendations were accepted, the various interest parties would have to agree a means of financing the parties' campaigns. The answer, said Johnson Boston, the president of the floundering Dominica Freedom Party (DFP), would be the taxpayer.

"The state would have to take some responsibility in providing resources to the political parties," Boston told The Sun. You don't want to leave parties with no money and nobody to go to because people are afraid [to reveal that they fund a particular party]. Therefore, the state may not be able to give you all the money you require . . . but it will limit the kinds of bands and artistes that you bring that cost thousands of dollars. And the rest you can raise but you'll have to disclose."

The DFP spokesman argued that by funding the campaigns, the state would eliminate the influence of unsavoury characters, not only on the election, but on the governance of the country.

"There's also dirty money out there and when you have dirty money vs dirty money you'll have crime and violence," he said. "As a responsible party, we [DFP] really want the money to fight, but we don't want at the end of it when you get into government you have a lawless country and you are unable to govern, so what you do you reject the money and so you remain at the bottom of the ladder."

The political scientist, Peter Wickham, accepts that state funding of campaigns would be good for democracy and would also help to "remove the need for the party to forge alliances with private sector interests that might raise suspicions".

Wickham believes that the OAS recommendations as presented are unrealistic because it would be impossible for a country with such scarce resources to effectively monitor and audit the various spending regulations and determine just what constitutes campaign spending.

He made reference to the United States where, in the lead up to the 2016 presidential election, then candidate, Donald Trump, paid pornographic actress Stormy Daniels to hide a sexual liaison between them.

"In the context of the Caribbean, if a politician was paying someone not to speak about a sexually liaison during an election campaign, we would have difficulty construing that as campaign finance. But it is, and the challenge is that we don't really have this sophisticated network to explore these things and to understand them," Wickham told The Sun.

His recommendation, therefore, is for state funding, along with limits on how the money can be spent.

"Let's give the political parties a generous amount and say there are certain activities you can and cannot do," said Wickham, "for example, no advertising, no entertainment at political meetings."