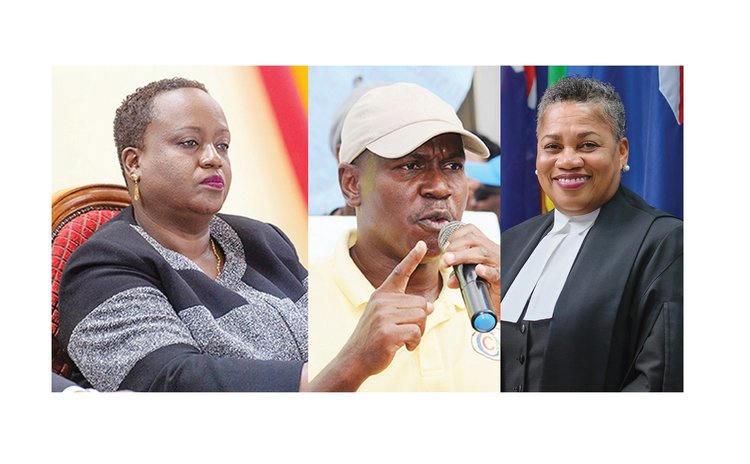 But Leader of the UWP, Lennox Linton, said he is not happy that Judge Stephenson will be hearing that matter and he wants her to "recluse herself".

The UWP has sent a letter to the Chief Justice of the Eastern Caribbean Supreme Court, Dame Janice M. Pereira expressing its concern.

Another Dominican, Loftus Durand, a known supporter of the UWP, has obtained signatures of persons who share his position on the issue and he has since sent a letter to Chief Justice Pereira asking that judge Stephenson not hear the matter.

"She has been a judge in Dominica 11 years requires that she recluses herself from this strike out application by the government as it relates to the election petition filed by the UWP," Linton said.

However, lead counsel for the government, Anthony Astaphan SC, described Linton's statement as "dishonest" since Judge Stephenson has ruled for and against the UWP.

A call to Judge Stephenson seeking comment was not answered or returned by press time.

"Mr. Linton is dishonestly attacking the reputation of the judge," Astaphan said.

In his letter to Chief justice Pereira, Durand said that he and other citizens of Dominica "are of the view that her length of stay (11 years) is not consistent with the well-established practice of the rotation of Judges; as well as the highly regarded principle of the independence of judges".

Durand added: "As many of the Eastern Caribbean countries, Dominica is a small, well- connected society where a High Court Judge can easily get infiltrated and influenced by the political landscape. Our concern is that by having such a long stint in Dominica, Justice Stephenson has become too involved and engrossed in the country's affairs".

He believes that justice would be better served if another judge other than Judge Stephenson hears the matter.

The full text of the letter is published below:

I write on behalf of myself and several citizens of the Commonwealth of Dominica.

I write to raise a concern as it relates to the justice system in our country. As you are aware, Hon. Justice Bernie Stephenson has been a High Court Judge in the Commonwealth of Dominica since October 2009 to present. She has therefore served a stint of almost eleven (11) years now. Myself and many of the citizens of Dominica are of the view that her length of stay is not consistent with the well-established practice of the rotation of Judges; as well as the highly regarded principle of the independence of judges.

As many of the Eastern Caribbean countries, Dominica is a small, well- connected society where a High Court Judge can easily get infiltrated and influenced by the political landscape. Our concern is that by having such a long stint in Dominica, Justice Stephenson has become too involved and engrossed in the country's affairs.

Further, as you may be aware, Dominica recently held its general elections in December of 2019 and members of the opposition filed election petitions before the High Court. This matter is due to be heard on June 10th 2020 before Justice Stephenson.

I say this without any ill will, or malicious intent, but looking at Justice Stephenson's track record on ruling on political matters in Dominica, a large majority of her judgements has been in favour of the current Administration of Dominica.

Therefore, we are humbly requesting that another of the Court's Justices be brought in and assigned to the upcoming matter. We are informed that this is a practice that is well established by the Court, for example:

• Justice Hugh Rawlins heard the Petition in Dominica after the 2005 election;

• Justice Errol Thomas dealt with the strike out application in the Skerrit citizenship matter and Justice Gertel Thom presided over the actual hearing;

• In the recent election petition case in St. Vincent a Judge from Trinidad was assigned to the case after the resident Judge, Justice Brian Cottle was found by the Appeal Court to have been bias in his handling of the earlier part of the matter.

In the circumstances, we further humbly request that the same consideration be given for the upcoming matter and that you use your discretion and reassign Justice Stephenson to another jurisdiction.

Thank you for your fair consideration and I look forward to your response.