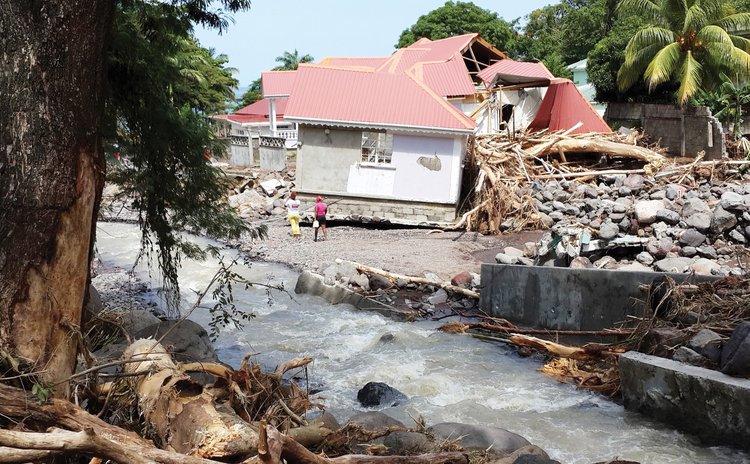 And with the hurricane season set to begin next week, disaster management experts and observers say Dominicans are in even greater danger today than they were on the day Erika struck.

"None of the infrastructure that would keep people safe has been attended to," says Athie Martin, an environmentalist and development expert. "So much of the population is in great danger."

What worries Martin and a disaster management specialist who spoke to The Sun on condition of anonymity because of the person's professional standing, is that fact that despite much "grandstanding" by government following the passage of the storm, little to nothing has been done to repair or strengthen the physical infrastructure.

As Martin puts it, they have cleaned up the mess – it's like clearing the mud off your steps but not repairing the foundation of your house, he explains – but nothing else.

And, the experts say, they hate to think what would happen to the country if it is hit by another storm similar to Erika during this hurricane season.

"No structural repairs have been done, particularly to the roads and there is no fundamental addressing of the deforesting of the slopes and ravines. The entire west coast road has been compromised . . . the bridges… remain very, very dangerous.

"We haven't moved one step, you know, from Erika. If we get anything we are in major trouble," Martin explains.

Three of the most senior technical officers were suddenly yanked from their positions effective 1 January this year.

Among them were Don Corriette, as national disaster coordinator, Steve Joseph as programme officer and Emmanuel Joseph. All three had acted for three-and-a-half years and had no adverse reports against them, The Sun was told.

"Even the gardener, his appointment as gardener and janitor was discontinued," one person explains.

"Some of the concerns from me is the way the leadership of the office of disaster management [was dismantled]. This . . . left a lot to be desired. A lot of the programmes . . . have been done away with. [The emphasis was on readiness and community involvement and none of that is happening now," this specialist says.

Former coordinator and disaster risk management specialist Cecil Shillingford has been contracted as a consultant and meteorologist Fitzroy Pascal is acting head.

Neither of the two was prepared to discuss the state of readiness when contacted by The Sun late last week, preferring to await the outcome of a meeting of the National Emergency Preparedness Organization that was scheduled for Friday morning.

But for Martin, the danger remains.

"We are playing games with the safety of people, with people's lives," he says.