"Now that the river is dying" 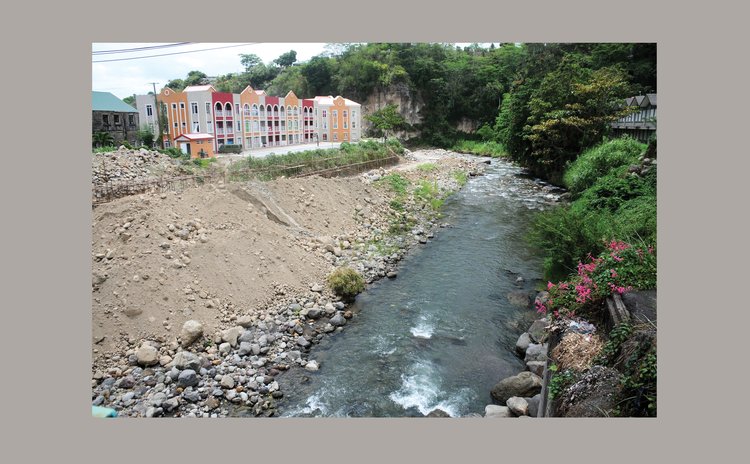 "I remember very clearly Daddy taking the entire family for river baths in the Roseau River. We would not bathe at Underpower with all the men but we would go to pools higher up the river where we were more private as a family. Daddy would swim in the strong currents, but I was too small to do that, and I would just watch in awe as he fought those currents. In those days the Roseau River was a huge river, easily spanning its two banks, not like it is today now that the river is dying."

When Toulon grew up in Roseau in the Sixties, the Roseau River was something to behold, a major tourist attraction, the main tributary through which flowed the life of the capital city of the Commonwealth of Dominica.

Take a look at it today.

An excavator is dragging away, with a giant hand, the "forests" that were growing in the middle of the river; that same excavator had built six "fake" basins for recreation just below the new apartment building; on an average day a vein of water flows lazily in the centre of wide, stony banks.

Wait for the dry season to begin and that vein will dwindle to an-almost-dry capillary.

The point is: if Dominica wants to grasp the enormity of the reality of the state of its rivers, now and in the not-too- distant-tomorrow-take a look at the Roseau River. Toulon's quote, above, makes the point simply and memorably.

Somehow, we thought that the World Rivers Day committee, headed by Father Franklyn Cuffy, would have used the current state of the Roseau River to drive home the point that our rivers, all 365 of them, are in serious trouble and to convince the government of Dominica that, at our current level of disinterest, it is almost too late to save our rivers.

On Sunday, 25 September, Dominica joins the rest of the world in the observance of World Rivers Day (WRD) in our usual laid-back manner.

The fact is all our rivers are dying, or are already dead, and it appears that our government and its citizens couldn't care less. For instance, WRD 2022 is to be held in less than one week but there are few plans or pronouncements urging people to observe that important occasion. Nevertheless, rivers, lakes and waterfalls mean so much to our existence. Essentially, rivers are the sum total of our tourism product. In other words, tourism dies as the rivers dry.

Thus, as we suggested last year, Prime Minister Roosevelt Skerrit, Dominica's minister of finance, must look beyond the building of resorts with the income derived from the Citizenship by Investment (CBI) programme. Before that programme inevitably closes, Mr. Skerrit should direct his ministries to design projects and programmes aimed at saving our rivers. Because without rivers Dominica will become a wasteland and resorts will become giant white elephants.

Mr. Prime Minister, if you ignore the state of our rivers, you are effectively saying goodbye to tourism. Sooner or later.

World Rivers Day, on 25 September, is an annual celebration of the world's waterways with people around the globe taking part in local events such as paddle tours, nature walks, tree plantings, river clean-ups and community festivals.

As we reiterate year after year in our editorials in the SUN, Dominica's rivers face a number of challenges such as pollution, deforestation and urbanization. The mega storms affecting the region and the increasingly frequent tropical waves help pollute our rivers with storm water laden with sewerage and garbage.

But the greatest threat to our rivers is neglect. We behave as if our rivers have been here for centuries and they will be here for centuries to come. Believe it or not, in Dominica there is no organisation or ministry of government that is mandated to care, clean, manage and protect our rivers. They all flow gentle and quietly to the sea and no one cares that that flow may stop.

Someone commented recently that he would be surprised if there is a trickle of water left in the Roseau River by 2050 given the pace at which the water level in that river is decreasing.

Toulon said it well: The "Roseau River was a huge river, easily spanning its two banks, not like it is today now that the river is dying."