While there may be as many as 41 fewer ships calling here next cruise season tourism officials say don't worry, it's the number of passengers they carry that matter 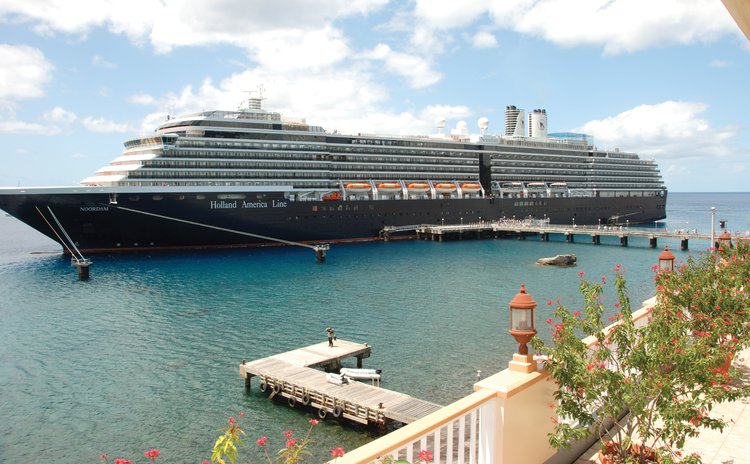 It won't be smooth sailing for the cruise industry here next season which begins in late October, with the number of scheduled calls likely to sink dramatically.

According to the cruise tracking website www.cruisemapper.com, Dominica can expect 133 calls between 29 October this year when the 2016/2017 season begins with the arrival of Celebrity Summit and 15 April 2017 when Royal Princess docks here.

If the numbers hold true, this will represent a drop of 41 when compared to the 2015/2015 which ends on 27 April when Adventure of the Seas' visit becomes the 174th and final cruise ship call of the season.

Chairman of the Dominica Air and Seaports Authority (DASPA) Benoit Bardouille could not immediately verify these numbers. However, speaking without the benefit of the schedule before him, Bardouille told The Sun by telephone that the figures quoted by the website were likely incomplete.

"I can tell you off my head from what I know, last year we had zero calls from Holland America, for example, and this year there will be five. I know the numbers have shifted . . . We have had some shifting numbers [but] I know we are pretty close. It's just neck and neck," he said of the projected number of cruise visits.

Next season's performance, according to the website, would continue a downward trend from the previous season. In 2014/2015, there were 192 calls totaling 274,346 passengers, according to figures from Discover Dominica Authority issued in a press release last October. That's 59 more calls than the projected 2016/2017 numbers.

"Despite all our efforts it would appear that the outlook is not any brighter and that we are on a downward slope . . . If all the ships scheduled to visit us were to be filled to capacity we could expect to welcome [a] maximum 282,415 passengers, but that is an Utopian scenario, which in reality never materializes," one industry observer told The Sun in an email.

However, Bardouille has rejected this notion, telling The Sun that while there might be fewer calls, the number of passengers may be higher. As a matter of fact, he suggested, the emphasis is on the overall economic impact.

"We are seeking to increase the passenger count, which is where we want to go," he said.

The DASPA boss explained that the authorities were concentrating on maintaining market share, while ensuring that Dominica did not lose its natural attributes.

One of the potential hurdles for the cruise sector here is the ever-increasing number of mega-ships being constructed that require bigger docking facilities and deeper waters.

Currently, Royal Caribbean International (RCI) dominates the large ship market with its Allure of the Seas, which went into service in 2010, and its Oasis of the Seas, of which it received delivery in 2009, being the largest, according to www.cruisecritic.com. Each is 1,187 feet long, with a gross tonnage of 225,282 tonnes and a passenger capacity of 6,296. RCI's Quantum of the Seas (2014) and Anthem of the Seas (2015) share third spot, both measuring 1,139 feet long, weighing 168,666 tonnes, and a maximum passenger capacity of 4,905.

However, in May of this year RCI is scheduled to launch the largest cruise liner ever, the 1,187 foot long Harmony of the Seas, weighing 227,000 tonnes and a maximum passenger capacity of 6,410 plus 2,300 crew members.

Bardouille admitted that the trend towards larger vessels poses a challenge for Dominica's infrastructure and carrying capacity.

However, he said, there was so much the local authorities could, or should do.

"I think we have to look at the overall picture in terms of the strategy. We are contemplating infrastructure improvements, however, it has to be modest," he said. "It has to [depend] on what is required from the cruise line."

According to www.cruisemapper.com, January will be the busiest month of the 2016/2017 with 32 scheduled calls, followed by February and March with 24 call each. The Norwegian Breakaway, which has a maximum passenger capacity of 4,000, is the largest vessel on the schedule and is expected to call on 22 January and 5 February, 2017. The most frequent caller is Mein Schiff-5 with 11 calls, followed by the Brittania, AidaDiva and Jewel of the Seas with ten calls each. Celebrity Summit, Royal Princess, Serenade of the Seas and Windsurf are each scheduled to visit eight times.

However, the website does not list any calls by any Carnival Cruise Lines vessels. One call was scheduled for the four-star rated Carnival Pride on 4 March, 2017 but this has been deleted from the schedule.